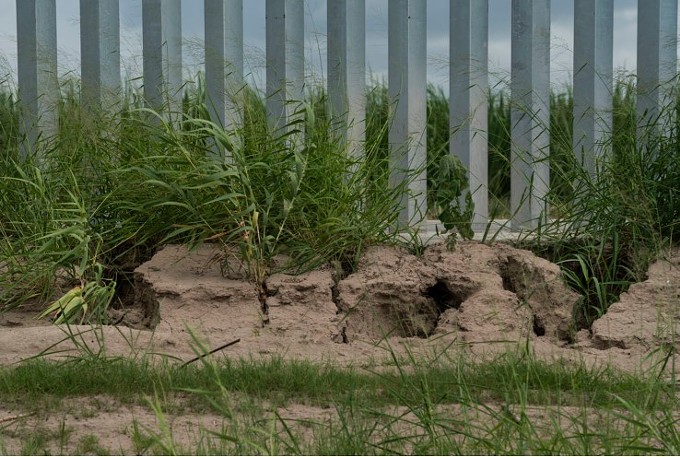 Gashes and gullies at the fence’s foundation show potentially dangerous erosion. (Verónica G. Cárdenas for The Texas Tribune/ProPublica)
ProPublica is a nonprofit newsroom that investigates abuses of power. Click here to read their biggest stories as soon as they’re published.

This article is co-published with The Texas Tribune, a nonprofit, nonpartisan local newsroom that informs and engages with Texans.

The builder of a privately funded border wall along the shores of the Rio Grande agreed to an engineering inspection of his controversial structure, which experts say is showing signs of erosion that threatens its stability just months after the $42 million project was finished.

Tommy Fisher, president of North Dakota-based Fisher Industries, had bragged he could build faster and smarter than the federal government, calling his wall design method a “Lamborghini,” compared with the government’s “horse and buggy.”

On Wednesday, U.S. District Judge Randy Crane instructed attorneys to work out details of the inspection and to come to an agreement about fixes for a part of the 3-mile fence that violates a treaty with Mexico by deflecting too much water during floods. Crane is overseeing a lawsuit brought by the federal government and the neighboring National Butterfly Center over the construction of the fence and its potential threat to the Rio Grande.

Fisher Industries’ attorney, Mark Courtois, said Wednesday that the firm plans to send out a crew to remediate the erosion, which was detailed last week in a ProPublica/Texas Tribune investigation. “What we anticipate is some sort of agreement where we continue to maintain it going forward,” Courtois told the court. “If there are issues that come up, we’ll address it.”

The 18-foot-tall fence, the first piece of border wall built directly on the shores of the river in the Rio Grande Valley, has become a flashpoint in the race to meet President Donald Trump’s campaign promise of about 450 miles of new wall, and was hailed by some as a new model for private industry’s contribution to that goal.

Fisher, a frequent guest on Fox News, has seen his company become Trump’s preferred border wall contractor. After embarking on his privately funded ventures, which include a half-mile fence outside El Paso, Fisher has been awarded about $1.7 billion in federal contracts for border wall work in Arizona.

Fisher’s private fence projects have gone up with financial and political help from We Build the Wall, an influential conservative nonprofit that counts former Trump political strategist Steve Bannon as a board member. The group says it has raised $25 million toward private wall efforts and claims to have agreements with landowners on 250 miles of riverfront property in Texas. The group has testified it contributed $1.5 million toward the Rio Grande Valley fence.

Assistant U.S. Attorney Eric Paxton Warner, representing the International Boundary and Water Commission, a binational agency that oversees building in the Rio Grande floodplain and enforces U.S.-Mexico boundary treaties on the river, told Crane that agency engineers have identified four areas of problematic erosion that need to be fixed.

Javier Peña, attorney for the National Butterfly Center, which sits just upriver from the fence, told Crane the erosion beneath the fence is “massive.”

“They built this wall on sand. ... You can see the erosion actually made a hole under the wall. Whether it goes all the way through is unclear because we haven’t inspected that.”

Last week, Courtois told ProPublica and The Texas Tribune that the erosion was a “normal” part of new construction and that the company would seek to build drainage ditches to lessen the deterioration.

Six engineering and hydrology experts consulted by ProPublica and The Texas Tribune said it was concerning to see the level of erosion around the fence so soon after construction and added that segments of Fisher’s steel structure could topple into the river if not fixed.

Amy Patrick, a Houston forensic structural and civil engineer, who has questioned the engineering viability of border walls in general, said the photos of the erosion show that something went wrong with the fence’s construction: “The fact that they need interventions this early is definitely concerning in terms of the longevity of the structure.”

The International Boundary and Water Commission argued that Fisher began construction without obtaining the necessary approval that the fence would not violate a water treaty with Mexico by exacerbating flooding on the Mexican side or causing the river’s boundaries to shift.

In January, Crane ruled the project could proceed despite the fact that the commission had not completed hydraulic models, and experts had warned that the fence should not have been built so close to the river’s edge.

The U.S. Border Patrol is building its own fence on top of a levee system about a mile north of the Fisher wall. Officials say that project continues, but it is unclear who will take over management of the Fisher wall long term. Fisher and his allies have said they would like to donate or sell the fence to the U.S. government, which has not agreed to purchase the structure.

According to a copy of an operation and maintenance plan provided to attorneys Wednesday by Fisher Industries, in addition to the planned inspection, the company plans quarterly inspections as well as extra checkups after large storms. The company will also plant grasses that better hold in place the sandy riverbank. New soil will be “treated and seeded” to help fill ground cover.

Clarification, July 9, 2020: This story has been clarified to reflect that U.S. District Judge Randy Crane instructed the parties to work out details of an inspection and fixes to the privately funded border wall.