The total number of confirmed coronavirus cases in Arizona rose to nearly 92,000 as of Friday, July 3, after the state reported 4,433 new cases this morning, according to the Arizona Department of Health Services.

A total of 1,788 people have died after contracting the virus.

Maricopa County has more than half the state's cases, with the number of confirmed COVID-19 cases hitting 57,929. 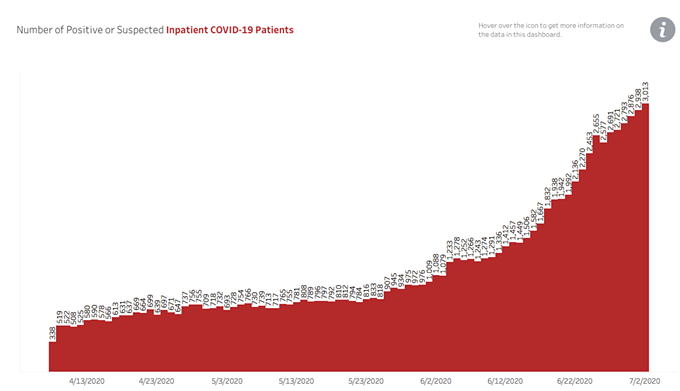 The number of people visiting ERs jumped dramatically yesterday, with 1,847 people seeking emergency rooms. The previous high, set on July 1, was 1,371. Since June 15, the daily number has only dropped below 1,000 twice.

A record number of 741 COVID-19 patients were in ICU beds yesterday, pushing the statewide number of adult intensive care bed in use past the 90 percent marker for the first time.

With the spread of COVID increasingly out of control in Arizona, Tucson Unified School District announced last night that it would launch online classes for all students starting Aug. 10, with in-person classroom instruction delayed until "when it is deemed safe," according to a letter to parents from TUSD Superintendent Gabrielle Trujillo.

Although Gov. Doug Ducey announced earlier this week that the start of the school year would be moved from Aug. 3 to Aug. 17, Trujillo said that date "may be aspirational."

"Due to this uncertainty, and the importance of creating a stable educational environment for our families and staff, Tucson Unified has determined we will begin all students via Remote Learning on Monday, August 10, 2020 and then transition those interested in an on-campus learning experience when it is deemed safe," Trujillo wrote. "Although starting this school year remotely is not ideal, we are committed to offering every child quality and rigorous curriculum, 5 days a week, from our highly qualified teachers. Instruction will be conducted utilizing teacher zoom lessons, as well as, some recorded lessons and offline homework. Classes will be consistent with real-time classroom instruction and will utilize approved online programs with assessment tools."

After Ducey pushed back the start of the school year, State Superintendent of Public Instruction Kathy Hoffman hinted that schools might not open then in a separate statement.

"What Arizona's numbers will look like by Aug. 17 remains unclear," Hoffman said. "But one thing is for certain: If efforts are not taken across the entire state to curb the spread of this virus, our schools will only continue to face complications in reopening their facilities."

In a Tuesday interview with KTAR radio host Mike Broomhead, Hoffman added that schools should be prepared to launch their online programs as soon as possible.

“We are encouraging schools to start their distance learning programs, or their online learning programs, as soon as they are ready to in terms of when their academic year was scheduled to start,” Hoffman said. “If you asked me a month ago or even two weeks ago I would have said plan for schools to be open and now the circumstances have changed so drastically in such a short period. I would say this has been highly unpredictable.”

In order to slow the spread of COVID, Ducey on Monday ordered the closing of some bars and all gyms, movie theaters, water parks, and river tubing activities for at least one month. Previously, Ducey had said new closures were not under discussion by his administration despite the rising number of cases.

Ducey warned that Arizonans will see more cases of COVID-19 before the numbers begin to decrease.

“Our expectation is, our numbers will be worse,” said Ducey, who repeated his call for Arizonans to mask up when in public, stay home as much as possible, wash their hands and keep a physical distance from others.

The Department of Health has also activated its “crisis standards of care” and asked hospitals to cancel non-emergency surgeries as more COVID patients fill hospitals, ICU beds, and emergency rooms. In a visit to Arizona this week, Vice President Mike Pence said the federal government would be sending up to 500 healthcare workers to Arizona to support Arizona's overstretched nurses and doctors.

Tucson City Councilman Steve Kozachik said Ducey's decision to close some bars, gyms and theaters was overdue but the right one.

"Our health care workers are exhausted," Kozachik said. "Our health care system is under stress. Families are separated at some of the most emotional and sensitive times of their lives."

Banner Health Chief Clinical Officer Marjorie Bessel announced last weekend that the hospital network, which treats about half of Arizona's hospitalized COVID patients, was reaching its limit as it activated its surge plan and balanced its load of patients among its facilities. Banner is calling in additional health care workers from around the country.

Here's what else happened on the coronavirus beat this week:

• Four Democratic members of Congress from Arizona—Raul Grijalva, Ann Kirkpatrick, Ruben Gallego, and Greg Stanton—were among 80 members of Congress who called on Homeland Security Secretary Chad Wolf and Acting Immigration and Customs Enforcement (ICE) Director Matthew T. Albence to “safely and swiftly” release children and adults held in immigration detention centers due to the threat of the COVID-19 pandemic.

The group sent a letter to Acting Homeland Security Secretary Chad Wolf and Acting Immigration and Customs Enforcement (ICE) Director Matthew T. Albence following an order from a federal judge on June 26 saying that all children who have been detained for more than 20 days at three facilities should be released.

“Since the COVID-19 pandemic began, Members of Congress, advocates, attorneys, and doctors have continuously urged ICE to use its authority to release detained families,” a letter to the Trump administration officials reads. “Instead of releasing families, ICE has used the pandemic to implement cruel and inhumane policies toward immigrants. For example, in May, following another order from Judge Gee that required ICE conduct individualized release assessments for children in detention-the agency asked detained parents to sign documents without counsel present, leading those parents to believe they were forced to choose between indefinite detention with their children, and the release of their children alone, without them.”

• The Arizona Interscholastic Association announced all school-related athletics and activities will be delayed until at least Aug. 17, in response to Gov. Doug Ducey’s executive order Monday pushing back the start date of all state schools. As a result, high school fall sports practice will be delayed until Arizona schools reopen mid-August and the fall competition season will also be postponed. AIA officials have not yet announced when the competition season will resume.

“We couldn’t be more disappointed about the information that just came out regarding our schools,” Executive Director David Hines said. “However, we understand that the most pressing concern is to ensure our student-athletes can return to school in the safest way possible.”

The AIA is continuing to assess how to reschedule the season statewide to help the AIA Executive Board have a better idea of when fall competition will begin. If revised timelines for the fall interfere with the winter sports season, those schedules will also be addressed at a later date, according to AIA officials.

• The University of Arizona Athletics Department announced that it would pause the process of bringing student-athletes back to campus because of the surge of cases in Arizona and the increasing stress on the healthcare system. "Out of an abundance of caution, we have made this decision with campus and community partners to pause our re-entry process," said Vice President and Director of Athletics Dave Heeke. "The health, safety, and wellbeing of all members of our community is our number one priority. We will continue to work in conjunction with campus partners and our local government agencies to support and evaluate a safe and healthy return to campus." The UA Athletics Department had started bringing student-athletes back to campus on June 15. So far, only one athlete among the 83 on campus has tested positive for COVID-19.

• The City of Tucson postponed this year's Independence Day fireworks display on "A" Mountain. City officials cite growing concerns over large gatherings during the pandemic as well as the potential for wildfires as reasons for the postponement. Local firefighters have been battling the Bighorn Fire in the Catalina Mountains since early June after lightning ignited dry brush on the mountain's backside. "With the recent large spike in COVID-19 case and the current administrative order to postpone reopening our City facilities to August 3, postponing the event at this time is the right decision to ensure that we stay on track slowing the spread and for our planned reopening," City Manager Mike Ortega said. "It is our intent to hold the event sometime in the future, when we can all safely come together, to celebrate coming out of this time of crisis and our return to a new normal for our society." Oro Valley and Marana have also canceled fireworks display.

• Arizonans are being asked to please stop trying to drink hand sanitizer to get drunk. Since June 1, Arizona’s poison centers have received 14 cases related to people drinking homemade liquor and hand sanitizers in pursuit of intoxication. While hand sanitizer does contain the same type of alcohol found in alcoholic drinks (ethanol) and can reach 140 proof, it can also contain the toxic alcohol methanol if improperly made. According to Banner Health, all 14 cases resulted in an adult being hospitalized in critical condition. “Methanol can contaminate illicit alcohols, resulting in blindness and organ failure. Even small amounts can be fatal without immediate treatment,” said Dr. Daniel Brooks, medical director of the Banner Poison and Drug Information Center. According to Banner, some of the callers reported they ingested homemade hand sanitizer in hopes of receiving intoxicating effects. However, this can prove fatal.

Cronkite News reports that Diamondbacks pitcher Mike Leake has opted out of playing this season.