The number of confirmed coronavirus cases in Arizona crossed the 74,000 threshold as of Monday, June 29, after the state reported 625 new cases this morning, according to the Arizona Department of Health Services.

That said, Arizona Department of Health Services tweeted earlier this morning that not all new cases are reflected in this total, and that a higher number is to be expected tomorrow because of this.

Cases in Arizona have more than tripled since June 1, when the state had 20,123 confirmed cases.

A total of 1,588 people have died after contracting the virus, including 268 in Pima County.

Maricopa County has more than half the state's cases, with the number of confirmed COVID-19 cases hitting 45,178.

This morning's Arizona Department of Health Services report shows that as of yesterday, 2,721  Arizonans were hospitalized, more than double the 1,009 hospitalized on June 1. 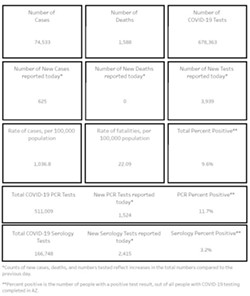 A total of 679 COVID-19 patients were in ICU beds yesterday.

If you're out in public in Pima County, you're now expected to wear masks or face coverings if you're older than 5. The Pima County Board of Supervisors voted 3-2 along party lines to require face masks on Friday, June 19. Likewise, Tucson Mayor Regina Romero issued a proclamation last week that requires face masks and includes a $50 penalty for those who don't mask up, although she said authorities would first try to educate those who don't wear masks and would resort to fines only for report offenders. There are exceptions for those who can't wear a mask for medical reasons.

Banner Health Chief Clinical Officer Marjorie Bessel announced over the weekend that the hospital network, which treats about half of Arizona's hospitalized COVID patients, was reaching its limit as it activated its surge plan and balanced its load of patients among its facilities. Banner is calling in additional health care workers from around the country.

In a press conference last week, Ducey warned the worst days of the outbreak still lay ahead.

“I don’t want there to be any illusion or sugar-coated expectations," Ducey said. "We expect that our numbers will be worse next week and the week following in terms of cases and hospitalizations."

Ducey noted the greatest growth was among people ages 20 to 44, who generally do not face the worst symptoms of the disease but are capable of transmitting it to parents, grandparents, and others who do.


“COVID-19 is widespread in Arizona,” Ducey said. “It’s in all 15 of our counties. It’s growing, and it’s growing fast across all age groups and demographics. Anyone can get this virus, and anyone can spread this virus.”

Ducey, who allowed bars and nightclubs to open alongside restaurants in mid-May as long as they had some kind of food services (which could be as minor as a bag of chips behind the bar), said that authorities would begin cracking down on establishments that did not enforce physical distancing recommendations.

Ducey said he’s changing the “green light” he gave to the state’s reopening in May has now changed to a cautious, “yellow light.”

“This virus is everywhere,” Ducey said. “It’s likely in this room right now and the actions that you take as a citizen will make a difference in how we care for our most vulnerable and how we handle remaining hospital capacity.” In other COVID-19 news this week:

• Gov. Doug Ducey and State Superintendent of Public Instruction Kathy Hoffman last week announced new funding for Arizona schools to support the reopening of schools in August. Ducey resolved a major challenge that schools were facing: Funding is based on how many students physically attend schools and with some families turning to online learning to avoid infection in the classroom, those numbers are likely to fall. Ducey, rather than call a special session of lawmakers to change the law, instead issued an executive order providing $200 million to Arizona schools to prevent the funding cuts and support remote learning.

The package also includes $40 million to improve broadband lines in rural Arizona, where internet connections can be spotty; $20 million for high-need schools; $6 million for the Arizona Teacher Academy to help with a teacher shortage; $1 million in micro-grants for innovative learning programs; $1 million to purchase vehicles for the Arizona School for the Deaf and Blind; $700 for leadership development; and $500,000 for tutoring programs. The Arizona Department of Education is providing an additional $25 million from the federal CARES Act for additional assistance to schools.

• As the number of cases spread, some local restaurants, such as DOWNTOWN Kitchen and Cocktails, BK Carne Asada and Hot Dogs, Fire N' Smoke, and Little Anthony's Diner, are closing their dining rooms and returning to takeout service. “I love my customers and I love my staff, and I’m concerned,” Little Anthony's owner Tony Terry said. “It was an easy decision until things calm down and we get a handle on it. I really think every responsible business owner in Tucson should do the same thing."

• The City of Tucson postponed this year's Independence Day fireworks display on "A" Mountain. City officials cite growing concerns over large gatherings during the pandemic as well as the potential for wildfires as reasons for the postponement. Local firefighters have been battling the Bighorn Fire in the Catalina Mountains since early June after lightning ignited dry brush on the mountain's backside.

"With the recent large spike in COVID-19 case and the current administrative order to postpone reopening our City facilities to August 3, postponing the event at this time is the right decision to ensure that we stay on track slowing the spread and for our planned reopening," City Manager Mike Ortega said. "It is our intent to hold the event sometime in the future, when we can all safely come together, to celebrate coming out of this time of crisis and our return to a new normal for our society."

• The tri-state area of New York, New Jersey and Connecticut, announced this week that visitors from Arizona and eight other states with skyrocketing COVID-19 infections would have to quarantine for 14 days upon arrival. Earlier this year, Arizona required people from those northwestern states to do a similar quarantine here while they had high numbers of coronavirus patients.