Courtesy photo
ProPublica is a nonprofit newsroom that investigates abuses of power. Click here to read their biggest stories as soon as they’re published.

The Federal Emergency Management Agency has warned states not to use COVID-19 testing supplies it bought under a $10.2 million contract after a ProPublica investigation last week showed the vendor was providing contaminated and unusable mini soda bottles.

A FEMA spokeswoman said the agency is working with the U.S. Food and Drug Administration and the Centers for Disease Control and Prevention to analyze test tubes filled with saline and sold to the government by Fillakit LLC, whose warehouse is near Houston.

“Out of an abundance of caution, we recommend this media not be used at this time,” spokeswoman Alex Bruner said. 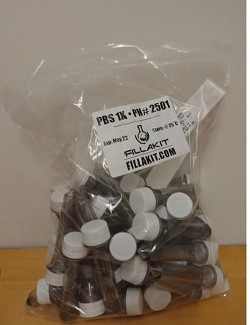 Fillakit’s plastic tubes don’t fit the racks used to analyze samples. (Provided by the New Mexico Department of Health)
ProPublica reported on June 18 that Fillakit was using plastic preforms, which are expanded with heat and pressure to become 2-liter soda bottles, to fulfill FEMA’s contract for testing supplies to be used by states. The bottles were shoveled into the warehouse, then filled with saline in what workers described as unsanitary conditions. Some of the states receiving the lab equipment told ProPublica that even if Fillakit’s tubes weren’t contaminated, they were simply too big to be used in lab machinery.

A later story in The Wall Street Journal raised similar allegations. The Journal first reported on Friday that the Department of Homeland Security’s inspector general is now looking into the contractor. Fillakit owner Paul Wexler previously told the Journal that allegations of unsanitary conditions were baseless and came from a disgruntled former employee.

Teresa Green, a retired science teacher and former Fillakit employee, told ProPublica that she spoke with someone identified as a “special agent” with Homeland Security who told her he was looking into Fillakit’s operations. Green declined to elaborate.

A spokesperson for the Homeland Security inspector general’s office said, “As a matter of policy, we do not confirm or deny open investigations.”

The FEMA spokeswoman said the agency continues to provide “critically needed testing supplies in a timely manner to our state and local partners in response to the coronavirus.”

FEMA signed its first deal with Fillakit on May 7, just six days after the company was formed by an ex-telemarketer repeatedly accused of fraudulent practices over the past two decades. Fillakit has supplied a total of more than 3 million tubes, which FEMA then approved and sent to all 50 states.

Wexler has previously declined to comment. A ProPublica reporter visited the facility this month and confirmed that workers were using snow shovels to gather up tubes and filling them, all in the open air.

Fillakit continues to advertise COVID-19 testing supplies on its website, including “Premier Leakproof Tubes.” The photos of tubes on its website look nothing like the larger soda preforms it has sold to FEMA, according to photos provided by state health departments and former employees.

Officials in New York, New Jersey, Texas and New Mexico confirmed they were not able to use the Fillakit tubes. Three other states told ProPublica that they received Fillakit supplies and have not distributed them to testing sites. FEMA had previously asked health officials in several states to find an alternative use for the mini soda bottles.

Last week, Missouri health officials asked testing facilities there to not use the Fillakit testing supplies sent out by the state.

ProPublica’s data analysis shows that federal agencies hastily awarded more than $2 billion dollars in COVID-19 contracts to vendors who had no prior federal deals.

In total, the federal government has committed more than $16 billion to more than 4,000 contractors in its attempt to address the spread of the novel coronavirus. More than 1,800 of those deals were given without competitive bidding. Many companies, including Fillakit, had no experience sourcing medical supplies.

ProPublica continues to update its searchable online database of all federal contracts awarded to address the pandemic.

COVID-19 in Arizona: Clubs close after citations, push back on Ducey’s call-out of ‘bad actors’