[image-4]
ProPublica is a nonprofit newsroom that investigates abuses of power. Click here to read their biggest stories as soon as they’re published.

It has become a familiar pattern: President Donald Trump says something that doesn’t line up with the facts held by scientists and other experts at government agencies. Then, instead of pushing back, federal officials scramble to reconcile the fiction with their own public statements.

It happened in March, when Trump pushed his opinion that antimalarial drugs could treat COVID-19. The Centers for Disease Control and Prevention issued an unusual directive that lent credence to the president’s perspective: “Although optimal dosing and duration of hydroxychloroquine for treatment of COVID-19 are unknown, some U.S. clinicians have reported anecdotally” on specific dosages that the CDC then lists. The CDC’s language — which the agency later retracted — shocked experts, who said the drug needed to be treated with caution. The CDC told Reuters the agency had prepared the guidance at the behest of the White House.

Perhaps the best known example of an agency twisting itself into a pretzel stems from “Sharpiegate.” After the National Weather Service’s Birmingham, Alabama, office contradicted Trump’s Sharpie fable that Hurricane Dorian threatened the state, the agency overseeing the office put out a statement backing the president over the scientists. Emails obtained by BuzzFeed and The Washington Post showed just how the episode roiled the agency. “You have no idea how hard I’m fighting to keep politics out of science,” one official wrote. Another email simply had one word: “HELP!!!”

On the same day last week, two separate agencies cut through the White House influence with their own factual conclusions.


The Food and Drug Administration announced last Monday that it was revoking emergency approval of the malaria drugs, saying that the dosing regimens promoted are “unlikely to produce an antiviral effect” and that their risks — which include potentially fatal cardiac side effects — outweigh the possible benefits.

ProPublica catalogued other instances in which government entities have changed language or made other moves buttressing the White House’s unsupported assertions.

“Our Stockpile”
The morning after Trump’s son-in-law Jared Kushner asserted that the national stockpile is “our stockpile” and not for states, the government changed the wording on the stockpile’s website.

Before Kushner’s comments, it said the “stockpile ensures that the right medicines and supplies get to those who need them most.”

That became: The stockpile’s “role is to supplement state and local supplies,” and “many states have products stockpiled, as well.”

A screenshot of the Strategic National Stockpile’s website after Jared Kushner’s comment, above, and before his comment.
A government spokesman said the update had been in the works for a week before Kushner’s comments. The spokesperson did not allow their name to be used.

“No Proof of Anything”
In another instance, after Trump warned in a tweet of “unknown Middle Easterners” crossing the border from Mexico — a “National Emergy [sic]” — the Department of Homeland Security released figures to support the claim. Upon inspection, it became clear the figures did nothing of the sort.

A few days later, the president backed off his claim of suspicious Middle Easterners crossing the border. “There’s no proof of anything,” Trump said, “but there could very well be.”

Agencies’ attempts to bolster the White House haven’t always borne fruit. In late 2018, Trump again warned about dangers at the Mexican border. “Women are tied up, they’re bound, duct tape put around their faces, around their mouths, in many cases they can’t even breathe,” Trump said. “They’re put in the backs of cars or vans or trucks.”

It wasn’t at all clear what Trump was referring to, but a top Border Patrol official tried to be of assistance. He emailed agents asking them to pass along any such evidence. (The email was obtained by a Vox reporter, Dara Lind, who’s now at ProPublica.)

The Border Patrol never followed up with examples.

The Inaugural Example
And then there was Trump’s first day in office. He publicly complained about what he said were misleading photographs comparing the size of the audience at his inauguration with President Barack Obama’s, and then-White House Spokesman Sean Spicer falsely claimed a record crowd size. 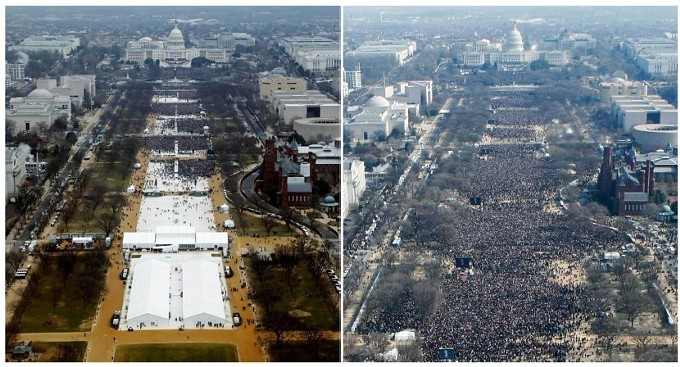 A combination of photos taken at the National Mall shows the crowds attending the inauguration ceremonies to swear in Trump, left, in 2017 and President Barack Obama in 2009. (Reuters Staff)
The Post soon reported the president called the head of the National Park Service to demand it release photos that would counter what he saw as the misleading comparisons. Sarah Huckabee Sanders, the deputy spokesperson, said the call was simply a reflection of a president who is “so accessible, and constantly in touch.”

A government investigation later found that after the call a National Park Service photographer cropped photos to take out empty areas. As the report noted, “He selected a number of photos, based on his professional judgment, that concentrated on the area of the national mall where most of the crowd was standing.”

The report noted that no one ordered him to do so.

The 10% Tax Cut for the Middle Class
Congress has also gotten involved. Right before the 2018 elections, Trump made unplanned comments that middle-class Americans would be getting a 10% tax cut. “We’ll be putting it in next week,” Trump said at a campaign rally in Houston. Nobody in the White House or Capitol Hill had even heard Trump talk about it before. Republicans responded by saying they were working on rolling out something — reportedly a nonbinding resolution — “over the coming weeks,” as one congressman put it.