The number of confirmed coronavirus cases in Arizona jumped over 43,000 as of Thursday, June 18, after the state reported a record number of 2,519 new cases this morning, according to the Arizona Department of Health Services.

A total of 1,271 people have died after contracting the virus, including 235 in Pima County.

Maricopa County has more than half the state's cases, with the number of confirmed COVID-19 cases hitting 23,880.

Although Gov. Doug Ducey told Arizonans that the state was "clearly on the other side of this pandemic" when he lifted his stay-at-home order on in mid-May, Arizona hospitals continue to see a steady rise in the number of people hospitalized with COVID symptoms, as well as more people visiting emergency rooms. This morning's Arizona Department of Health Services report shows that as of yesterday, a record 1,667 Arizonans were hospitalized, a jump of 658 people from the 1,009 hospitalized on June 1. A record number of 1,109 arrived at emergency rooms with COVID-like symptoms on June 17. Previous to June, the number of people seeking help in emergency rooms never topped 667, but the daily number hasn't dipped below 800 since June 5. The number of patients in ICU beds hit another record of 540 yesterday. 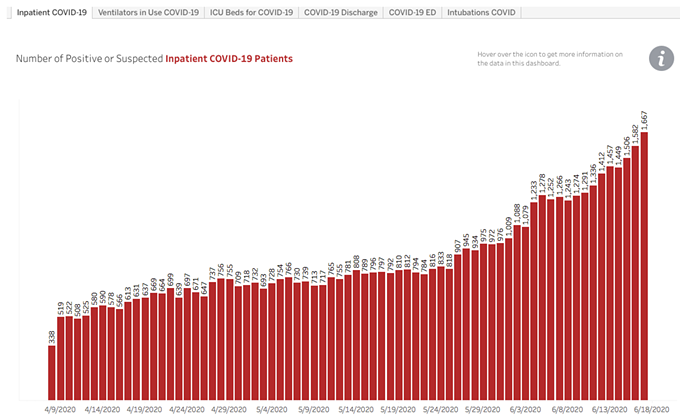 At a press conference yesterday, Ducey clarified that when he said the state was "clearly on the other side of this pandemic," he meant that the state had a lot more information about how the virus behaves, not that the COVID-19 outbreak had peaked. He also said he could now see a trend in the rising cases; at a press conference two weeks ago, he said the rising cases were data but he couldn't see a trend.

"There is an indication that we are not out of the woods yet," Ducey said.

Ducey, who wore a mask before beginning the press conference for the first time, said he would allow cities and counties to set their own policies in regard to mandating the wearing of masks. While he had previously blocked local jurisdictions from setting standards more strict than the state's emergency regulations, Ducey said different areas of the state were facing different circumstances, so he was relaxing his emergency regulations that limited the actions of local communities. He said it would be up to local communities to set up rules and penalties.

Kozachik yesterday called for the city to return to the emergency proclamation issued by Romero in March that limited restaurants to curbside service and closed bars, gyms, theaters and other gathering places. Kozachik said he believed the city's charter gave the council that authority, although he said he expected it would be challenged by Republican state lawmakers.

Meanwhile, the Pima County Board of Supervisors will meet Friday to vote on whether to mandate masks when people go out in public to slow the rising spread of COVID-19.

In other pandemic news, Pinal County Sheriff Mark Lamb, who had earlier said he wouldn't enforce the state's emergency COVID-19 regulations, announced yesterday that he tested positive for COVID-19.

Lamb said on Facebook that he likely caught the virus at a campaign event and would be self-quarantining for 14 days even though he was asymptomatic.

He learned he was positive after taking a test ahead of a visit with President Donald Trump.

Summerhaven Still Spared but Bighorn Fire at Now at 30,000 Acres