Summerhaven Still Spared but Bighorn Fire at Now at 30,000 Acres


The Bighorn Fire made a large run Wednesday night, burning more than 10,000 additional acres throughout the western flanks of Mount Lemmon and the Catalina Mountains. The fire had burned an estimated 31,000 acres and is 40 percent contained, according to a morning press briefing.

The fire burned an estimated 13,616 acres yesterday, which was easily the most devastating day yet. The second most destructive day so far was Friday, June 12, at 3,762 acres.


Fire crews were successful in pushing the fire around and away from Summerhaven. The town and surrounding structures, including the Mount Lemmon Sky Center and the Mount Lemmon Fire Department headquarters, remained unharmed. However, the fire remains active to the south and west of the Mount Lemmon community. Fire operations section chief Travis Mayberry says fire crews are "very concerned" about the fire moving back toward the community.


"It all played out to be a very challenging day for the folks up on the hill," Mayberry said. "The fire was extremely active, it got established in Romero Canyon just to the west of the observatory and made a pretty significant push to the northeast, wrapping around the community of Summerhaven.”


Last night was intensified by strong winds, which not only fanned the flames, but grounded some air support. However, Mayberry says that although there is some wind today, air support should be fine.

More than 800 personnel are working on the Bighorn Fire, and 400 firefighters worked on the ground to protect Summerhaven last night.


The fire crews plan to work today within the old Aspen Fire line if the Bighorn makes a push toward Oracle. The community of SaddleBrooke should expect to see smoke off the western edges of the Catalinas. The fire is still present in Ventana Canyon.


The areas of Summerhaven and Mount Lemmon remain under an evacuation order. The Catalina Foothills and the community of Catalina remain on the "Be Ready" to evacuate order.

An interactive map of the evacuation and warning areas can be found here. 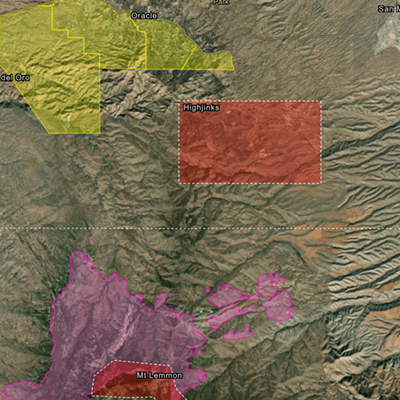