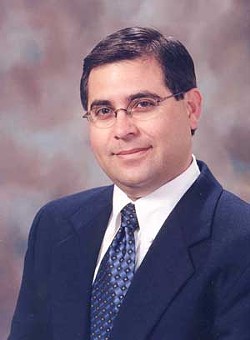 Supervisor Ramon Valadez.
The Pima County Board of Supervisors will meet Friday to vote on whether to mandate masks when people go out in public to slow the rising spread of COVID-19.

Ducey, who wore a mask before beginning the press conference for the first time, said different areas of the state were facing different circumstances, so he was relaxing his emergency regulations that limited the actions of local communities. He said it would be up to local communities to set up rules and penalties.

Kozachik had earlier today called for the city to return to the emergency proclamation issued by Romero in March that limited restaurants to curbside service and closed bars, gyms, theaters and other gathering places. Kozachik said he believed the city's charter gave the council that authority, although he said he expected it would be challenged by Republican state lawmakers.

Ducey's action comes as the number of confirmed coronavirus cases in Arizona soared to nearly 41,000 as of today after the state reported 1,827 new cases reported this morning.

Pima County had 4,385 of the state's 40,924 confirmed cases, according to the Arizona Department of Health Services. That's more than double the 20,123 confirmed cases the state had on June 1.

A total of 1,239 people have died after contracting the virus, including 229 in Pima County.

Maricopa County has more than half the state's cases, with the number of confirmed COVID-19 cases hitting 22,272.