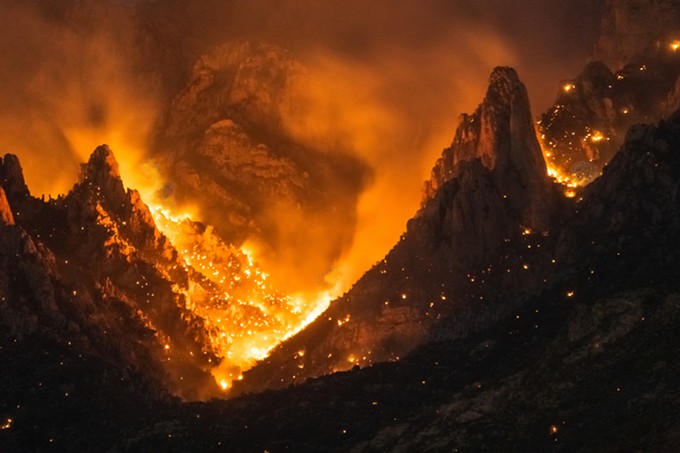 ©Preshit Ambade
The Bighorn Fire has burned more than 17,000 acres since June 5.
Mount Lemmon's community of Summerhaven was spared as the Bighorn Fire continued to rage in the Santa Catalina Mountains.

The fire has now devoured 17,500 acres and is 40 percent contained, primarily on the eastern and southern edges of the blaze near Oro Valley and the Catalina Foothills. according to a morning incident report. Residents in those areas have been advised to remain in "set" position in the state's Ready, Set, Go evacuation system. The fire has moved to Samaniego Ridge and firefighters are keeping an eye on the areas of SaddleBrooke and East Golder Ranch.

Mount Lemmon residents were told to evacuate the mountain yesterday. Catalina Highway has been closed at milespost zero since Sunday night.

More than 700 firefighters are now battling the Bighorn Fire, including eight hotshot crews and multiple aircraft and bulldozers.

Firefighters did burnout operations near Radio Ridge and the Mount Lemmon Sky Center yesterday. The fire was to the west and north of Summerhaven, according to a morning briefing. Fire barriers set since the 2003 Aspen fire have helped protect the community, as has work by firefighters in recent days.

High and gusty winds today are expected to fuel the fire and limit the ability of firefighters to use aircraft to battle the blaze.

The fire was ignited by lightning on Friday, June 5.

Catalina State Park has been closed and firefighters have established a restricted area bounded along the Coronado National Forest boundary south and east to the northeast corner of the Sabino Canyon Recreation Area, northeast along the Forest boundary to its northeastern terminus at Sabino Creek, Sabino Creek north to the Arizona Trail, the Arizona Trail northwest to the junction with Romero Trail, and the Romero Trail northwest to Catalina State Park

Fire crews remind the public that drones are prohibited over the fire area because firefighting aircraft are busy and must be grounded in drones' presence. On June 5, a drone incursion resulted in "an investigation with the drone operator being issued a violation notice."