The number of confirmed coronavirus cases in Arizona jumped past 39,000 as of Tuesday, June 16, after the state reported a record new 2,392 new cases reported this morning, according to the Arizona Department of Health Services.

A total of 1,219 people have died after contracting the virus.

Maricopa County has more than half the state's cases, with the number of confirmed COVID-19 cases hitting  20,775.

Although Gov. Doug Ducey told Arizonans that the state "was clearly on the other side of this pandemic" when he lifted his stay-at-home order on in mid-May, Arizona hospitals continue to see a steady rise in the number of people hospitalized with COVID symptoms, as well as more people visiting emergency rooms.

This morning's Arizona Department of Health Services report shows that as of yesterday, a record 1,506 Arizonans were hospitalized, a jump of 497 from June 1. A record number total of 956 people arrived at emergency rooms with COVID-like symptoms on June 15, according to the report. Previous to June, the number of people seeking help in emergency rooms never topped 667, but the daily number hasn't dipped below 800 since June 5. The number of patients in ICU beds hit a new record of 502 yesterday. 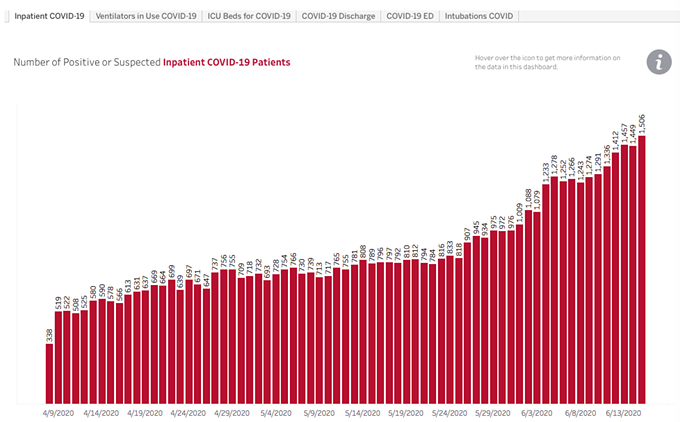 Tucson officials, including Mayor Regina Romero and Tucson City Councilman Steve Kozachik, have asked Ducey to allow local communities to set their own standards to reduce the rapid spread of COVID-19. Under his executive order, Ducey has prohibited local jurisdictions from setting standards tougher than state regulations.

Romero yesterday urged Ducey "to remove the restrictions he has placed on local governments from taking their own public health measures."

"For example, I believe that face masks should be mandatory in areas of the state with high community transmission for indoor spaces where social distancing is not feasible," Romero said. "Gov. Ducey needs to untie the hands of local governments and allow us to make decisions that are in the best interest of our communities and account for local conditions."

Ducey, who has rarely been seen with a mask or face covering and whose administration has frequently neglected to include the advice in various health advisories it has sent out, said last week he did wear them while shopping when he cannot physically distance from others by at least 6 feet. He advised Arizonans to wear them if they felt comfortable doing so.

Despite the rising number of hospitalizations, Gov. Doug Ducey said last week there's no reason to be concerned about hospital capacity.

Ducey pushed back at local and national media reports that suggested that the rising cases, increased hospitalization, and reversal of CDC gating criteria trends meant that Arizona was moving in the wrong direction and called reports that the healthcare system was nearing capacity "misinformation."

"In addition, the utilization of the surge line remains an effective tool in ensuring that patients are evenly distributed among hospitals in order to avoid capacity issues at any one facility," the letter added. "Our surge plans will also create additional capacity for patients if needed. Arizona’s network of medical care is strong, stable, and prepared."

Banner Health officials warned on June 5 that unless current trends changed, they would have to activate a reserve bed plan as their ICU beds were nearly full.

Ducey insisted last week that he did not lift his stay-at-home too early.