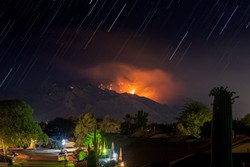 Courtesy Pima County
As hotshot crews and aircraft continue to battle the Bighorn Fire in the Santa Catalina Mountains, residents of Mount Lemmon, including the community of Summerhaven, have been warned to be prepared to evacuate.

Mount Lemmon residents were advised to consider voluntarily relocating now ahead of an evacuation order.

Rocky Gilbert, a operations section chief for the Southeast Incident Management Team, said firefighters would be in the Summerhaven area to review existing breaks and would set up a camp at Rose Canyon Lake.

"We are trying to plan ahead for a worst-case scenario," said Gilbert in a briefing this afternoon. "Things are not imminently threatened, but we don't want to get caught with no plan in place."

Gilbert said the firefighting team had made good progress stopping the fire on western and northern edges in Oro Valley and Catalina. Firefighters spent the weekend conducting a burnout operation near East Golder Ranch to protect area homes from the advancing blaze and have been working above the fire in the Santa Catalinas to try to stop its advancement toward Mount Lemmon.

On Friday, June 12, the Pima County Sheriff's Department ordered the evacuation of neighborhoods in the area of East Golder Road and East Rollins Road. People living in the area south of East Hawser Street and east of North Lago del Oro Parkway were told to be "set" to evacuate if conditions worsen.

Meanwhile, residents in the Catalina Foothills north of Ina Road between First Avenue and Alvernon Way were allowed to return their homes Friday as an earlier evacuation order was lifted. However, everyone living between First Avenue and Alvernon Way north of Ina Road and everyone living between Alvernon Way and Sabino Canyon Road north of Skyline Road have been warned to remain "set" to go should they need to leave their homes.

Portions of Oro Valley east of Oracle Road and north of Magee Road are also warned to be "set" to evacuate.

The fire has grown to 13,200 acres since it was ignited by lightning on Friday, June 5, according to an incident report. It was 22 percent contained as of Sunday night.

Catalina State Park has been closed and firefighters have established a restricted area bounded along the Coronado National Forest boundary south and east to the northeast corner of the Sabino Canyon Recreation Area, northeast along the Forest boundary to its northeastern terminus at Sabino Creek, Sabino Creek north to the Arizona Trail, the Arizona Trail northwest to the junction with Romero Trail, and the Romero Trail northwest to Catalina State Park

A total of 506 fire personnel and multiple aircraft are fighting the Bighorn Fire.

Fire crews remind the public that drones are prohibited over the fire area because firefighting aircraft are busy and must be grounded in drones' presence. On June 5, a drone incursion resulted in "an investigation with the drone operator being issued a violation notice."

The size of the fire has been updated in this post based on a new incident report.

Your Southern AZ COVID-19 AM Roundup for Monday, June 15: Confirmed Cases Surpass 36K; Trends Moving in Wrong Direction; Ducey Says "Virus Is Something We Need To Learn How To Live With"