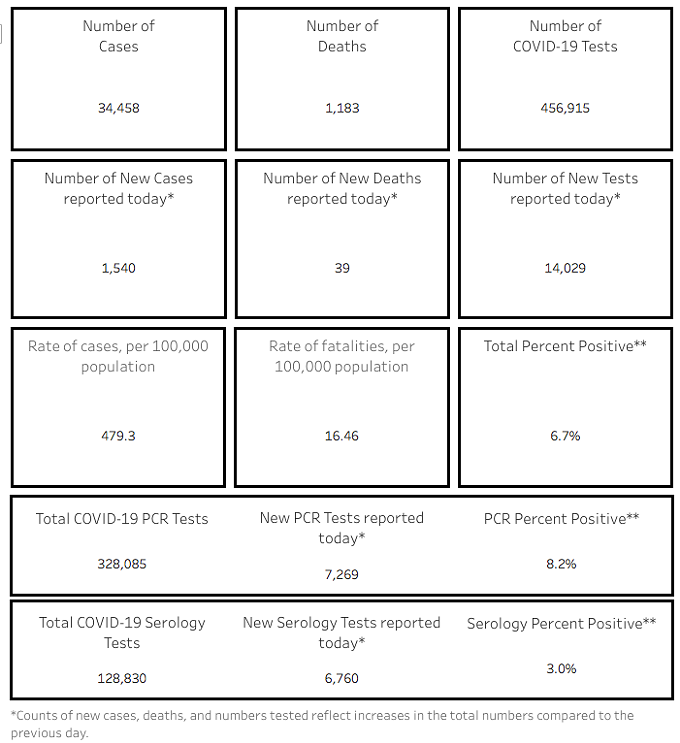 The number of confirmed coronavirus cases in Arizona jumped past 34,000 as of Saturday, June 13, with a jump of 1,540 new cases reported this morning, according to the Arizona Department of Health Services.

A total of 1,144 people have died after contracting the virus, including 223 in Pima County.

In Maricopa County, the number of confirmed COVID-19 cases hit 17,791.

Although Gov. Doug Ducey told Arizonans that the state "was clearly on the other side of this pandemic" when he lifted his stay-at-home order on in mid-May, Arizona hospitals continue to see a rise in the number of people hospitalized with COVID symptoms, as well as more people visiting emergency rooms. This morning's Arizona Department of Health Services report shows that as of yesterday, a record 1,412 Arizonans were hospitalized, a jump of 403 (or 28 percent) from June 1.

For the second day in a row, more than 900 people arrived at emergency rooms with COVID-like symptoms on June 13, according to the report. Previous to June, the number of people seeking help in emergency rooms never topped 667, but the daily number hasn't dipped below 800 since June 5. A record number of 447 Arizonans were in ICU units. 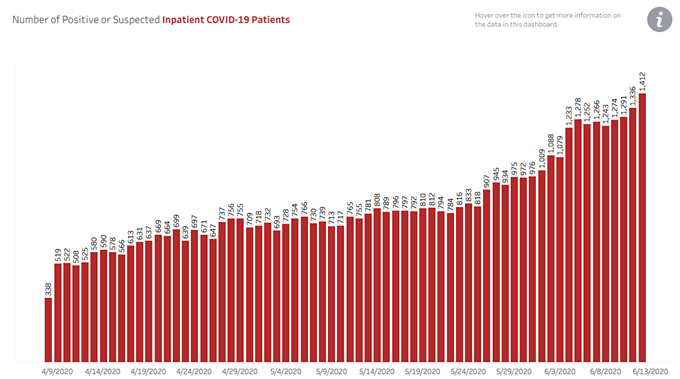 AZ Dept of Health Services
A record number of COVID-19 patients were hospitalized in Arizona yesterday.

Despite the rising number of hospitalizations, Gov. Doug Ducey said earlier this week there's no reason to be concerned about hospital capacity.

In a contentious June 11 conference, Ducey acknowledged that trend was moving in the wrong direction and promised the state would continue to monitor that number. But he said the idea of enacting a new stay-at-home order was not under discussion by his administration.

Ducey pushed back at local and national media reports that suggested that the rising cases, increased hospitalization and reversal of CDC gating criteria trends meant that Arizona was moving in the wrong direction. He called reports that the healthcare system was nearing capacity as "misinformation."


Ducey pointed to a letter from the Health System Alliance of Arizona released yesterday that stated: "As representatives of the largest health systems representing 80% of care provided in this state, we would like to assure the public that we have available bed capacity and surge plans are in place to continue to serve the people of Arizona. We are well prepared to manage an increase in patient volume."

Banner Health officials warned last week that unless current trends changed, they would have to activate a reserve bed plan as their ICU beds were nearly full.

• As hotshot crews and aircraft continue to battle the Bighorn Fire in the Santa Catalina Mountains, The Pima County Sheriff's Department yesterday ordered the evacuation of neighborhoods in the area of East Golder Road and East Rollins Road. People living in the area south of East Hawser Street and east of North Lago del Oro Parkway were told to be "set" to evacuate if conditions worsen. Here is a map of the area.

Meanwhile, residents in the Catalina Foothills north of Ina Road between First Avenue and Alvernon Way were allowed to return their homes as an earlier evacuation order was lifted. However, everyone living between First Avenue and Alvernon Way north of Ina Road and everyone living between Alvernon Way and Sabino Canyon Road north of Skyline Road have been warned to remain ready to go should they need to leave their homes. Portions of Oro Valley east of Oracle Road and north of Magee Road are also warned to be "set" to evacuate.

The fire has grown to 10,387 acres, according to an incident report. Firefighters spent the night conducting a burnout operation near East Golder Ranch to protect area homes from the advancing blaze. They were expected to continue that work today until temps get too high to continue

The fire is now established in upper Ventana Canyon and Romero Canyon and is expected to continue growing toward Window Rock. Firefighters are working above the fire to try to stop the fire's progression toward Mount Lemmon and Summerhaven. Aircraft will be dropping water and retardant today.

Catalina State Park has been closed and firefighters have established a restricted area bounded along the Coronado National Forest boundary south and east to the northeast corner of the Sabino Canyon Recreation Area, northeast along the Forest boundary to its northeastern terminus at Sabino Creek, Sabino Creek north to the Arizona Trail, the Arizona Trail northwest to the junction with Romero Trail, and the Romero Trail northwest to Catalina State Park Nearly 400 fire personnel and multiple aircraft are fighting the Bighorn Fire.