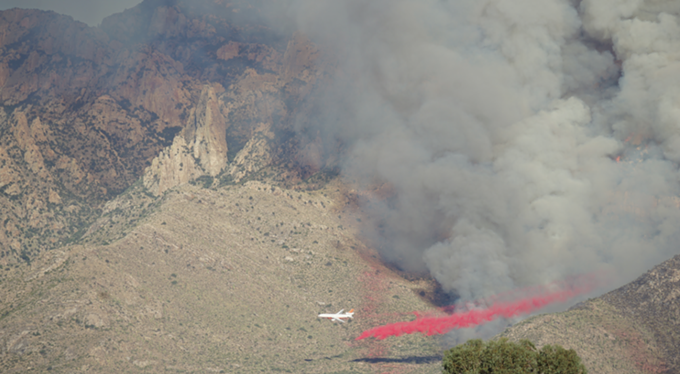 Fire crews are currently battling two thousand-plus-acre fires north of Tucson: the Bighorn Fire in the Santa Catalina Mountains, and the Tortolita Fire in the Tortolita Mountains. Lightning storms caused both fires, which are being worsened by gusty weather and high temperatures.

The Bighorn Fire ignited on the evening of June 5, burning across the Pusch Ridge in clear view of Oro Valley. The fire grew from 200 acres on June 6 to more than 1,000 on June 7. The Arizona Emergency Information Network says the following trails may be impacted by the fire: Romero Canyon, Pusch Peak, Pima Canyon, Finger Rock and Ventana Canyon. Approximately 100 fire personnel and multiple helicopters are fighting the Bighorn Fire, which is currently 10 percent contained.

There are no evacuations at this time.


Fire crews remind the public that drones are prohibited over the fire area, as firefighting aircraft are busy and must be grounded in drones' presence. On June 5 a drone incursion resulted in "an investigation with the drone operator being issued a Violation Notice."