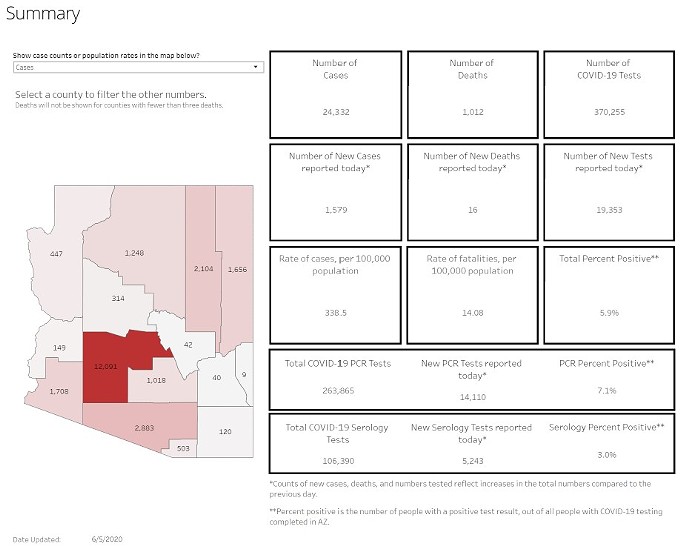 The number of confirmed coronavirus cases in Arizona surpassed 24,000 as of Friday, June 5, according to the Arizona Department of Health Services. That's a single-day jump of more than 1,500 cases.

In Maricopa County, the number of confirmed COVID-19 cases hit 12,091.
Because symptoms can take as long as two weeks to appear after exposure to the virus (while some people can remain entirely asymptomatic), health officials continue to urge the public to avoid unnecessary trips and gatherings of more than 10 people, especially if you have underlying health conditions, and have advised people to cover their faces with masks in public.

Following the end of Gov. Doug Ducey's stay-at-home order on March 15, Arizona hospitals are seeing a rise in the number of people hospitalized with COVID symptoms, as well as more people visiting emergency rooms. Today's Arizona Department of Health Services report shows that through yesterday, 1,234 Arizonans were hospitalized, a jump of 155 from the previous day. A total of 718 people arrived at emergency rooms with COVID-like symptoms on June 4, according to the report.

At a press conference yesterday, Ducey said he and Department of Health Services Director Dr. Cara Christ anticipated the current increase in positive COVID-19 cases because testing has “dramatically increased” within the state.

Christ reported 8,227 staff and residents in skilled nursing facilities across Arizona have been tested for the virus. They expect to have tests done at all of these facilities by June 11.

She downplayed the alarm about the recent increase in cases, which some have attributed to the end of the stay-at-home order on May 15, saying “as people come back together, we know there will be transmissions of COVID-19.” While they admitted new cases are to be expected when people begin to interact again, Ducey and Christ said their main focus was to ensure that hospitals had capacity for an increase in cases. They reported that current use of hospital beds, ICU beds, and ventilators are all within capacity at this time.

• Ducey has ordered a statewide curfew from 8 p.m. to 5 p.m. through June 8 unless extended. The curfew order came following a weekend of unrest in Tucson and Phoenix. A protest against police violence turned violent in downtown Tucson on Friday night when rioters smashed windows, painted graffiti, and otherwise went wild in downtown Tucson.

The protest was one of many across the country following the killing of George Floyd, who died in police custody after a Minneapolis Police Officer kneeled on his neck for more than eight minutes as the black man gasped for air and said he couldn't breathe.


Following Friday's riot, Tucson Mayor Regina Romero and Tucson Police Chief Chris Magnus asked the public to not attend a Saturday protest. A few hundred people still turned out on Saturday night for a protest march that went smoothly until a small number of protestors attempted to march back downtown and clashed with police.

During the curfew, members of the public are prohibited from "using, standing, sitting, traveling, or being present on any public street or in any public place, including for the purpose of travel," according to the Tucson Police Department. Exceptions include police, firefighters, emergency responders, medical personnel, the National Guard, and members of the media.

However, the public is allowed to travel to and from work, go out for dinner or a drink, make deliveries, shop for groceries, care for a family member, friend or animal, patronize a private business, seek medical care, or flee a dangerous situation.

• A new Fox News survey shows that 60 percent of voters are concerned they will catch COVID-19, while 39 percent are not concerned; 40 percent say that Gov. Doug Ducey is reopening Arizona too quickly, while 39 percent say it's the right pace and 15 percent say it's too slow; and 75 percent have a favorable opinion of people who wear face masks, while 12 percent have an unfavorable opinion. Gov. Doug Ducey got high marks in the survey, with 61 percent approving of his job performance and 33 percent disapproving.

The survey also showed appointed Sen. Martha McSally is trailing former NASA astronaut Mark Kelly by 13 percentage points in Arizona, according to the survey. Half of the voters surveyed say they plan to vote for Kelly, while just 37 percent say they will vote for McSally. In the presidential race, the Fox News poll shows 46 percent of voters favoring Democrat Joe Biden while 42 percent support President Donald Trump. The state is split when it comes to Trump's job approval; 46 percent of those surveyed approved of the job Trump is doing, while 52 percent disapprove. But only 28 percent strongly approve of Trump's job performance (with 17 somewhat approving), while 41 percent strongly disapprove (with 11 percent somewhat disapproving).

• COVID-19 is spreading through Immigration and Customs Enforcement detention facilities even as the court system is experiencing delays as a result of the outbreak, meaning that detainees can't get hearings for bond or parole. Of the roughly 26,000 people detained by ICE, only 2,300 have been tested for COVID-19 and roughly 1,200 have tested positive.

Margo Cowan, an attorney and project coordinator with Keep Tucson Together, said her clients in detention could have their hearings from inside the detention center via video meeting, but a Tucson judge has refused to grant motions to waive the defendant’s presence. The strategy employed by ICE is to make it as difficult as possible to proceed with the legal process, especially during COVID-19, Cowan said, in order to pressure detained people to just give up and agree to be deported rather than fight to stay.

Last Friday, U.S. Reps. Raúl Grijalva, Ann Kirkpatrick, Ruben Gallego, Greg Stanton, and Bennie Thompson sent a letter to ICE Deputy Director Matthew Albence with “deep concerns” about the conditions within migrant detention centers in Arizona, specifically the La Palma, Eloy and Florence centers. They named Judge John Davis as the one who is halting the proceeding of court hearings, and called it “unacceptable.” The group stated it was imperative that these hearings continue. They wrote that it is “inhumane to prevent hearings for possible release while forcing individuals to stay in unsanitary and unsafe conditions during this pandemic,” and called for COVID-19 testing to be administered inside detention facilities routinely.

• Pima County Justice Court is hearing eviction cases this week, with more than 500 on the docket, according to Pima County Constable Joe Ferguson. Evictions have been delayed through late July as a result of the spread COVID-19 and the subsequent economic meltdown, but the court hearings that will set the stage for the evictions are set to resume as courts get back to business. While renters with COVID-related hardships have been protected from evictions, late rent payments have not been forgiven.

• Tucson City Court reopened this week. The court had been closed since March except to hear a limited number of cases. As the court reopens, all staff and visitors will be required to wear a face mask, maintain social distance to the extent possible, and undergo a temperature check. Anyone who has a fever of more than 100.4 or above having their hearing rescheduled. Access to the courtrooms will be restricted to court staff, defendants, parties, witnesses, victims, treatment providers, ADA assistants, and attorneys who wear masks or face coverings. The public should arrive a half-hour before their scheduled hearing time to navigate the new restrictions.

Other City of Tucson buildings remain closed to public access through June 8. When city buildings reopen, visitors will be required to wear masks and may need to undergo a temperature check before being allowed in. City employees can continue to telecommute, especially those with underlying health conditions or those who have children who need care. The city is continuing its moratorium on disconnecting water service and the moratorium on evictions at city-owned properties through June 30.

• COVID-19 symptoms typically occur two to 14 days after exposure, and include headache, fever, cough, shortness of breath, or a loss of taste and smell, according to the CDC. However, some cases of the virus are entirely asymptomatic. Practices to avoid infection include social distancing (of at least six feet), washing your hands, avoiding unnecessary trips, and not touching your face. If you think you have been exposed to COVID-19 and develop a fever, cough, or difficulty breathing, speak with a healthcare provider for medical advice.

According to the CDC, people who are mildly ill with COVID-19 are able to recover at home. Stay at home and avoid public transportation, but stay in touch with your doctor. If you do leave your home, wear a facemask, and clean your hands often. If you develop more severe symptoms (persistent pain or pressure in the chest, confusion, bluish lips) get medical attention immediately. Your local health authorities will give instructions on checking your symptoms and reporting information.