Courtesy Photo
Pima County Supervisor Sharon Bronson: “The primary concern that I have for rural communities is that we ensure that they have some food security."
The board’s decisions have been met with criticism across the political spectrum. Democratic supervisors Ramon Valadez, Sharon Bronson and Betty Villegas said they voted for the regulations to ensure public safety, while Republicans Steve Christy and Ally Miller say the new rules make it harder for beleaguered businesses to reopen. At the request of three GOP lawmakers, Attorney General Mark Brnovich investigated if the measures imposed by the board exceeded their authority, but the complaint was dismissed yesterday on a legal technicality because the Board of Supervisors released the proclamation that was the source of the complaint when they passed revised regulations.

Tucson Weekly asked the candidates running for Board of Supervisors seats this year if they approved of those decisions and if they would have done anything differently. Here’s what the candidates in District 3 had to say.

In the District 3 Democratic primary, six-term Supervisor Sharon Bronson is facing Juan Padres, who is making his first run for public office. Padres, who previously worked for the autonomous trucking company TuSimple, is now operating his own business, a courier service between Tucson and Nogales. He is also involved in bringing Mexican craft beers to the Tucson market.

Bronson, who voted in favor of closing bars and limiting restaurants to take out and delivery in March, said responding to the virus has been challenging because of a lack of resources coming from federal agencies.

As Gov. Doug Ducey starts reopening up the state’s economy, Bronson said Pima County will have the challenge of monitoring how that transition goes and trying to encourage extra steps to keep people safe. 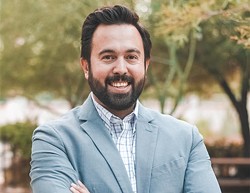 Democratic challenger Juan Padres says the county moved too slowly in combatting the COVID-19 outbreak.
In recent weeks, as restaurants and bars resumed dine-in service, she voted in favor of new regulations for restaurants and bars that are reopening and providing in-house dining. She was also critical of Pima County Administrator Chuck Huckelberry’s decision to require telecommuting workers to return to their normal jobs starting next week. Bronson advocated that every county employee wear a face mask at work, and suggested the county team up with Pima Community College to produce more masks.

At a May 13 emergency board meeting, Huckelberry eased back on his requirement that workers return to their desks. Telecommuting employees now have a few courses of action to remain away from the office if they have a concern about coming back.

Bronson, in particular, is concerned about the rural communities of Pima County. Her district covers 7,400 square miles, including Tucson’s west side, Three Points and the town of Sells on the Tohono O’odham reservation. She and Supervisor Bruce Bracker of Santa Cruz County are working together to obtain and deliver food boxes to households in rural parts of their jurisdictions. They were also able to get supplies delivered to Native American communities in other parts of the state.

“The primary concern that I have for rural communities is that we ensure that they have some food security,” Bronson said. “It’s been a challenging time, but we came together, we got the job done and the national guard was instrumental in helping us get this food delivered.”

Padres declined to comment on the recent controversy about county restaurant regulations, but he earlier told the W t about the county's recent said the county’s initial response to the pandemic was a little slower than what the community expected.

He said the county was probably waiting to see what Gov. Ducey was planning to do, but being the body that runs the health department, the county should have acted faster.

“They don’t make me feel that much better after I hear them,” Padres said.

He also believes the county should be doing more to be a “partner” in helping businesses stay afloat during this time. While the county has established a “Back to Business” task force, Padres sees gig economy workers, such as musicians, artists and more, being left in the dark about how to make it through COVID-19.

The winner of the August Democratic primary will face Republican Gabby Mercer, who could not be reached for comment.