As if firefighting wasn’t dangerous enough, crews grapple with COVID-19

Bigstock
TEMPE – As if fighting fires wasn’t dangerous enough, firefighters now have to worry about COVID-19 while they’re on the job, making for what fire officials say will be the “most challenging season we’re going to have.”

Strategies to check the spread of the disease include everything from avoiding eating together in large mess halls to splitting the regular 10-person fire crew into two teams of five. But officials said they still expect challenges in a job that relies on constant face-to-face communication.

All of which comes in a year in which conditions are ripe for intense wildfires in the state.

“This is going to be one of the most challenging seasons we’re going to have, with the added complexity of trying to deal with the COVID-19 protocols from the CDC (Centers for Disease Control and Prevention),” State Fire Management Officer John Truett said during a recent briefing.

He said personnel will be encouraged to stay away from firefighters before a blaze, to ensure the strength of the workforce, and to maintain distances as best they can when in the field. In some cases, he said, it is possible to alter actions during firefighting to maintain social distancing, but that it all depends on time and resources available.

“It’s argued … that we can minimize the time of exposure and the proximity to other people that may potentially be COVID-19 positive, then we reduce likelihood of spreading,” Coil said.


That can include firefighters avoiding mingling with operational personnel and workers undergoing a required a temperature check before every shift.

But Coil said there will still be times where firefighters will have no choice but to be in close proximity to each other, for example, during the actual mission of suppressing the fire.

Scottsdale Fire Department Assistant Chief Eric Valliere said firefighters are getting temperature checks before they come into the station and are checked for symptoms. If a firefighter has any symptoms, they are sent back home.

Valliere, who is also chairman of the Fire Department Safety Officers Association, said that 10-person fire crews will now be split up into groups of five to follow CDC guidelines.

“We’re going to try to socially distance as much as we can,” he said.

Highlands Fire District Chief Dirch Foreman said social distancing will be enforced when possible on the fire line and in camp and that officials anticipate fewer large fire camps in an effort to limit exposure.

The new strategies come none too soon: Fire chiefs say the fire season is already starting to hit and will likely continue until the monsoon season starts.

“Arizona is already in fire season,” Foreman said. “Over the past couple weeks, the higher-elevation timber country has experienced a handful of wildfires.”

Those have been easy to suppress so far, he said, since it’s still early in the season. But the outlook is more challenging.

“The wildfire season in the Valley is going to be pretty bad,” Valliere said. “As far as looking at the fine fuels and some of the things that we dealt with last year, some things are going to probably be more aggressive this year.”

Foreman said that a reported 1,867 wildland fires – about three-quarters of which were caused by people – burned approximately 400,000 acres in Arizona last year. National forests and some counties in the state have already started implementing fire restrictions to reduce fires started by people. 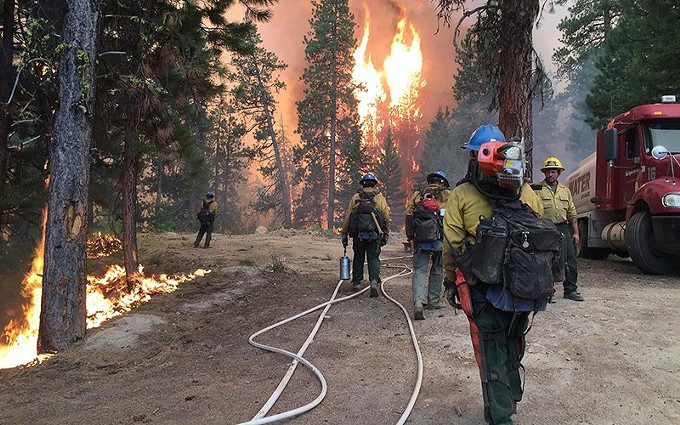 Arizona fire officials say they are taking steps to keep crews social distanced, but there will be times in the field when firefighters will have no choice but to be in close proximity. (Photo courtesy of the U.S. Forest Service)

Those include reminding Arizonans to not throw cigarette butts out the window or drag chains on trailers, Valliere said. And it includes banning campfires, which Coil said may have a double benefit, not only reducing small fires but also minimizing the spread of COVID-19 on campgrounds.

As far as what kind of role the stay-at-home order will play in the wildfire season, Valliere said it is too early to tell. But Coil said that because many people are not working because of the shutdown, they could be more likely to engage in activities that could spark a fire, by taking their trailers out to the lake and dragging the chains on the road, for example.

Scottsdale Fire Deputy Chief Adam Hoster said the department plans to use social media and other technology to spread the message of fire prevention and to track fire activity.

“Every city has their own demographic for this urban wildland firefighting interface,” Hoster said. In Scottsdale, he said, fire officials have been mapping “troubled areas” where they can devote more resources and attention.

And in much of the state, officials are looking forward to an active season, as wet winter conditions led to new growth that can provide fuel for fire as the state starts drying out.

“The lower elevations, due to winter precipitation, which produced an abundant grass crop are at higher risk,” Foreman said. “Specifically the southeast portions of the state, the Sonoran desert fuels and areas around Wickenburg seem to be most at risk.”

Despite the double threat of disease and dry forests, however, officials say they are prepared and are working with state and federal partners to share resources as well as an automatic system that deploys trucks and personnel across Phoenix.