The warming of the climate is one of the principal drivers of the greatest — and fastest — loss of species diversity in the history of the planet, as shifting climate patterns force species to change habitats, push them into new regions or threaten their food and water supplies. What’s known as biodiversity is critical because the natural variety of plants and animals lends each species greater resiliency against threat and together offers a delicately balanced safety net for natural systems. As diversity wanes, the balance is upset, and remaining species are both more vulnerable to human influences and, according to a landmark 2010 study in the journal Nature, more likely to pass along powerful pathogens.

The casualties are amplified by civilization’s relentless push into forests and wild areas on the hunt for timber, cropland and other natural resources. Epidemiologists tracking the root of disease in South Asia have learned that even incremental and seemingly manageable injuries to local environments — say, the construction of a livestock farm adjacent to stressed natural forest — can add up to outsized consequences. 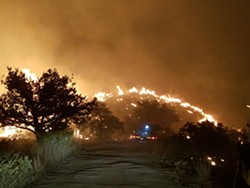 Courtesy Burro FIre Info Facebook Page
The Burro Fire burning east of Tucson in Redington Pass.
Around the world, according to the World Resources Institute, only 15% of the planet’s forests remain intact. The rest have been cut down, degraded or fragmented to the point that they disrupt the natural ecosystems that depend on them. As the forests die, and grasslands and wetlands are also destroyed, biodiversity sharply decreases further. The United Nations warns that the number of species on the planet has already dropped by 20% and that more than a million animal and plant species now face extinction.

Losing species has, in certain cases, translated directly to a rise in infectious disease. Americans have been experiencing this phenomenon directly in recent years as migratory birds have become less diverse and the threat posed by West Nile encephalitis has spread. It turns out that the birds that host the disease happen to also be the tough ones that prevail amid a thinned population. Those survivors have supported higher infection rates in mosquitoes and more spread to people.

Similarly, a study published last month in the journal Proceedings of the Royal Society B found that as larger mammals suffer declines at the hands of hunters or loggers or shifting climate patterns, smaller species, including bats, rats and other rodents, are thriving, either because they are more resilient to the degraded environment or they are able to live better among people.

It is these small animals, the ones that manage to find food in garbage cans or build nests in the eaves of buildings, that are proving most adaptable to human interference and also happen to spread disease. Rodents alone accounted for more than 60% of all the diseases transmitted from animals to people, the researchers found.

Warmer temperatures and higher rainfall associated with climate change — coupled with the loss of predators — are bound to make the rodent problem worse, with calamitous implications. In 1999, for example, parts of Panama saw three times as much rainfall as usual. The rat population exploded, researchers found. And so did the viruses rats carry, along with the chances those viruses would jump to people. That same year, a fatal lung disease transmitted through the saliva, feces and urine of rats and mice called hantavirus pulmonary syndrome emerged in Panama for the first time, according to a report in the journal Emerging Infectious Diseases.

As much as weather changes can drive changes in species, so does altering the landscape for new farms and new cities. In fact, researchers attribute a full 30% of emerging contagion to what they call “land use change.” Nothing drives land use shifts more than conversion for farmland and feedstock — a result of the push to feed the planet’s 7.8 billion people. As the global population surges to 10 billion over the next 35 years, and the capacity to farm food is stressed further again by the warming climate, the demand for land will only get more intense. Already, more than one-third of the planet’s land surface, and three-quarters of all of its fresh water, go toward the cultivation of crops and raising of livestock. These are the places where infectious diseases spread most often.

Take, for example, the 1999 Nipah outbreak in Malaysia — the true-life subject matter adapted for the film “Contagion.” Rapid clearcutting of the forests there to make way for palm plantations drove fruit bats to the edge of the trees. (Separate research also suggests that climate changes are shifting fruit bats’ food supply.) They found places to roost, as it happens, alongside a hog farm. As the bats gorged themselves on fruit, they dropped pieces of food from the branches, along with their urine, into the pigsties, where at least one pig is believed to have eaten some. When the pig was slaughtered and brought to market, an outbreak is believed to have been spread by the man who handled the meat. More than 100 people died.

The U.S. Centers for Disease Control and Prevention says that fully three-quarters of all new viruses have emerged from animals. Even the 2014 Ebola outbreak in West Africa is believed to have begun when a boy dug into a tree stump that happened to be the roost of bats carrying the virus.

As Christine Johnson, the associate director of the One Health Institute, an interdisciplinary epidemiological program at the University of California, Davis, puts it, global health policymakers have a responsibility to understand how climate, habitat and land use changes lead to disease. Almost every major epidemic we know of over the past couple of decades — SARS, COVID-19, Ebola and Nipah virus — jumped to people from wildlife enduring extreme climate and habitat strain, and still, “we’re naive to them,” she said. “That puts us in a dangerous place.”