Posted By Cronkite News / Howard Center for Investigative Journalism on Mon, May 11, 2020 at 4:00 PM

Bigstock
London Bridge, Lake Havasu City, AZ
Homeland Security Investigations, a division of ICE, describes human trafficking as a “top investigative priority.” But its handling of recent sex-trafficking investigations in Arizona and beyond has raised questions about the agency’s undercover techniques.

The women were forced to live and work in filth and near darkness, the federal agent said, surviving on only the tips they received from performing massages and sexual favors.

Lon Weigand, the deputy special agent in charge of Homeland Security Investigations in Arizona, described them as “Asian females” who may be sex-trafficking victims. He praised the joint operation between federal agents and local police in western Arizona that led to their rescue and credited the “investigative techniques” that helped crack a “transnational criminal organization.”

Weigand assured those at a press conference called to announce the investigation’s successful conclusion that HSI had followed a “victim-based approach.” While he wouldn’t reveal anything more about the women, he added, “Know that they are now safe and being cared for.”

What Weigand didn’t say at that September 2018 press conference – although HSI documents show that some supervisors knew – was that federal undercover agents repeatedly paid for and engaged in sexual acts with the suspected victims as part of their investigation.

That fact, coupled with HSI’s refusal to let its agents testify at trial, torpedoed a case that was more than three years in the making. All felony charges against the accused ringleaders were dropped. And the women likely were retraumatized, sex-trafficking experts said.

Defense attorneys, whose clients went free because of HSI’s handling of the case, were outraged to learn of the agents’ “investigative techniques.”

“That’s our tax money,” said attorney Josephine Hallam, whose grandfather was the former U.S. Supreme Court Justice Hugo Black. “Shouldn’t they be at the border, or doing something with terrorists rather than getting sex acts?”

(Source: Havasu Scanner Feed)
Lon Weigand, deputy special agent in charge for Homeland Security Investigations (HSI) in Arizona, praises a multiagency sex-trafficking investigation at a Sept. 25, 2018, news conference in Lake Havasu City. Although nine people were arrested in the yearslong investigation, most charges were dropped when lurid details of agents’ behavior came to light.
Homeland Security Investigations is the largest investigative unit in the Department of Homeland Security, which was created in the wake of the 9/11 terrorist attacks. HSI’s 7,000 agents have wide-ranging authority to investigate a variety of cross-border crimes, including sex- and human-trafficking. But for all its power and scope, HSI has received relatively little public attention, even though internal inspector-general reports have criticized it for a lack of accountability and oversight. HSI agents also have been involved in numerous shootings of civilians around the country, an investigation by the Howard Center for Investigative Journalism revealed in February. Internal reviews and other data about the shootings have been denied under federal Freedom of Information Act requests.

“HSI is committed to placing the safety of potential victims at the forefront of every investigation,” said Yasmeen Pitts O'Keefe, a spokeswoman with U.S. Immigration and Customs Enforcement, HSI’s parent agency. “Conduct by a limited number of HSI agents involved in the investigation was not consistent with HSI policy.”

But HSI’s own documents, statements by local police, and the federal government’s response refute the idea this was a rogue action.

Brad Rideout, who represented two women charged in the investigation, said he believes the agents’ behavior was not unprecedented. “In my experience in law enforcement, these types of things do not just happen in one spot,” the attorney said.

Police in Lake Havasu City and Bullhead City – the Mohave County cities across the Colorado River from California and Nevada that were the focus of the sex-trafficking investigation – said they were told by HSI that its policy permitted undercover agents to engage in sex acts with suspects. It is illegal in Arizona, as in other states, for police to engage in sexual activity with subjects of an investigation.
click to enlarge 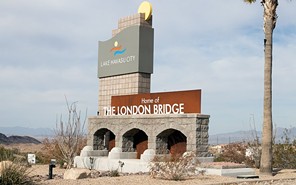 A welcome sign proclaims Lake Havasu City as the home of the London Bridge, which was transported to western Arizona and reconstructed in 1968. Havasu was the backdrop of a sex-trafficking investigation that ultimately fell apart in December 2019. (Photo by James Paidoussis/Howard Center)
click to enlarge 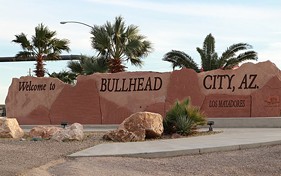 Bullhead City, across the Colorado River from Nevada, was the site of several coordinated police raids on massage parlors in September 2018. Charges against the key suspects ultimately were dismissed. (Photo by Mythili Gubbi/Howard Center)


A leaked online policy handbook, confirmed by retired HSI senior agent Louie Garcia, describes how, with supervisor approval, undercover agents can engage in “otherwise illegal” behavior. Although Garcia and another former HSI official said agents were not allowed to have sexual contact with subjects of their investigation, Garcia said he didn’t recall that prohibition in writing.

“In absence of a written policy, a lot can be left to chance,” said David Thomas, head of sexual misconduct training for the International Association of Chiefs of Police, which for years has prodded law enforcement agencies to implement bans on officers having sex in the line of duty.

Over a nearly five-month period, the HSI undercover agents documented in graphic detail 17 sexual encounters with women working in eight massage parlors. Ultimately, two women were designated as victims, but their whereabouts are unknown. Two other women who were charged with prostitution were initially put in ICE detention, although only one still faces deportation hearings.

Records reveal HSI officials in Arizona, as well as local prosecutors and a judge, knew the details of the undercover tactics and allowed the investigation to go forward.

“It is difficult to exaggerate the extent to which the law enforcement community collectively turns a blind eye when its members engage in misconduct,” said Clark Neily, vice president for criminal justice at the Cato Institute, a libertarian think tank in Washington, D.C.

Dominique Roe-Sepowitz, a nationally recognized sex-trafficking researcher in Arizona, said the outcome sent a bad message to both victims and traffickers, adding, “We’ve done a disservice to the victims if we don’t do cases right.”

Your Southern AZ COVID-19 PM Update for Monday, May 11: What We've Covered Today