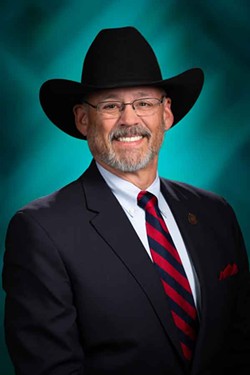 Rep. Mark Finchem, an Oro Valley Republican who represents Legislative District 11, condemned Ducey’s decision to extend the shutdown, saying that quarantine should be only for people who are currently sick or showing symptoms of being sick.

He said the move was “wholly unacceptable” and he and other state lawmakers are planning to draft a ballot initiative in response to what they see as government overreach.

“That’ll be next year’s session, if we have the opportunity,” Finchem said. “It will limit the authority of mayors and future governors to wholesale shut down the economy and deprive people of their sustenance and their ability to feed their families.”

Finchem said the steps Ducey took cannot be justified considering a lack of meaningful data on the virus. He also wants to explore the possibility of furloughing some state government employees.

“If he’s going to define nonessential businesses, then we also need to take a close look at nonessential government functions,” Finchem said.

State Rep. Bret Roberts, another Republican from District 11, said more people are beginning to worry about the economic effects of COVID-19 rather than the medical risks.

He predicts lasting effects on the economy, specifically the housing and agriculture industry, and says there will be impacts from this shutdown to come that we aren’t even aware of yet.

“We’re going to be seeing effects on this for quite some time to come and those are where my concerns lie,” Roberts said.

Roberts warns that there will be more suicides, drug overdoses, cases of domestic violence and other negative social impacts stemming from the halt to the economy and growing numbers in unemployment.

He said Arizonans are already “acutely aware” of the precautions they need to take, such as voluntarily wearing masks, washing hands more often and doing social distancing.

At the same time, Roberts believes it should be up to the individual to decide how far they want to take the precautions.

“If you are in a health category that you have more of a concern as far as your age or medical conditions and you want to take extra precautions as far as staying home and things of that nature, then by all means do so,” Roberts said. “No one is going to prevent you from doing that. But at the same time, it’s imperative that we get our economic engine up and running again in the state of Arizona as quickly as possible because it’s going to be just a horrendously bad thing and I think that we need to do what we can to counter that as quickly as possible.”

Lawmakers have been away from the Capitol since temporarily adjourning in mid-March because of the outbreak, but efforts by leadership to bring them back to adjourn sine die for the year have been unsuccessful.

State Sen. Vince Leach (R-LD11) did not respond to efforts to reach him for a comment.