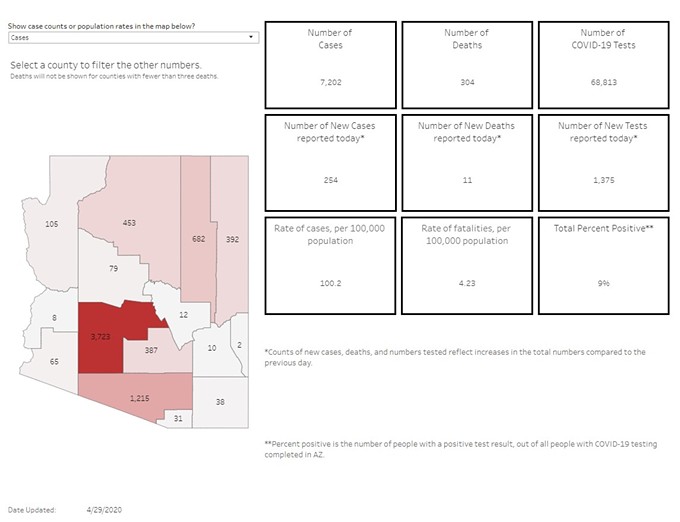 The number of confirmed coronavirus cases in Arizona topped 7,000 as of Wednesday, April 29, according to the morning report from the Arizona Department of Health Services.

The coronavirus had killed 304 people statewide, including 80 in Pima County, according to the report.

In Maricopa County, the number of confirmed COVID-19 cases had risen to 3,723.

Because testing remains limited in Arizona and COVID-19 symptoms can take as long as two weeks to appear after exposure to the virus (while some people can remain entirely asymptomatic), health officials continue to urge the public to avoid unnecessary trips and gatherings of more than 10 people and have advised people to cover their faces with masks in public.

The order has closed a wide variety of “non-essential” businesses, including bars, barbershops, salons, theaters, gyms, swap meets, and many retail stores. Restaurants may remain open but only for takeout and delivery service. Public parks remain open but amenities such as playgrounds and restrooms are closed.


“Gov. Ducey is working closely with President Trump, Vice President Pence, Dr. Anthony Fauci, Dr. Deborah Birx, Dr. Cara Christ and state, local and federal health experts to implement the latest guidance from CDC and the White House,” Ptak said. “Every decision we make will continue to be informed by public health and a commitment to reenergizing our economy when it is responsible and safe to do so.”

Ptak said there were three options under consideration: Letting the order expire, extending it as it or modifying it depending based on the latest spread of the virus.

Under the stay-at-home order, Arizonans are still able to shop for groceries, medical and household needs, and pet supplies. They can also go work, pick up a take-out meal from a restaurant, travel to take care of a family member, friend, or pet, and can still go walking, hiking, biking, and golfing, provided that they adhere to social distancing guidelines.

Ducey has already announced that under certain circumstances, hospitals could return to performing elective surgeries, which had been put on hold over concern of a wave of COVID-19 cases overwhelming health care facilities. The ban on those elective surgeries had caused major financial losses for hospitals as they emptied rooms to prepare for a potential surge in COVID-19 cases that has not appeared.

More than half of the 73 people in Pima County who died after contracting COVID-19 as of April 23 were either residents of long-term-care nursing homes or assisted living facilities, according to a press release from Pima County this weekend. Of Pima County's 1,047 cases, 280 of them (or 27 percent) were in longterm care facilities, including 180 residents and 100 staffers. Of those, 78 residents and nine staffers had to be hospitalized. A total of 38 deaths of residents of such facilities had been reported as of last Thursday.

Congress last week passed a new $493 billion relief package that included an additional $310 billion for the Paycheck Protection Program as well as $75 billion for hospitals facing the financial strain of the outbreak and $25 billion for additional testing capacity. The new portal for loans opened earlier this week and then crashed under the demand for service.

The first round of the Paycheck Protection Program, which offered $349 billion in forgivable loans as part of the $2.2 trillion COVID-19 relief package passed by Congress in response to the outbreak, ran out of money less than two weeks after it was launched. Many business owners complained that the loan process, run through banks by the Small Business Administration, was too complicated and filled with roadblocks.

The new federal relief package does not include additional aid to state and local governments struggling with a drop in tax revenues. While Democrats pushed for that funding to be included, it was opposed by Senate Majority Leader Mitch McConnell and other GOP leaders. McConnell said last week that it made more sense to allow states to go bankrupt rather than provide them with more federal funding, although he has since said that he might support such funding if Democrats agree to limit legal liability for businesses in relation to potential COVID-19 lawsuits.

Pima County Administrator Chuck Huckelberry said last week that he was assembling a task force that would develop strategies for reopening businesses. The Back to Business Task Force will include members of the county’s Small Business Commission along with representatives from restaurants, hotels and resorts, chambers of commerce, gyms, daycares, area attractions, film, and live performance theaters and event centers.

“The purpose of the Task Force will be to establish a framework of hygiene and physical distancing standards that need to be developed to begin to reopen, in a limited, phased manner, the commercial and business activities that may have been suspended or substantially interrupted during this time,” Huckelberry wrote in a memorandum to the Board of Supervisors last week.

The outbreak has hammered Arizona's economy, with more than 400,000 people applying for unemployment in recent weeks. State budget forecasters warned lawmakers earlier this month that the state is facing a budget deficit of $1.1 billion in the next fiscal year, which begins in July. But they cautioned that the uncertainty surrounding the outbreak means they could be wrong by $500 million in either direction.

Tucson City Manager Mike Ortega has warned council members that the city was going to take a major financial hit but said he didn’t have enough data to make an informed forecast as to the depth of it.

“We know there’s an iceberg ahead, but won’t know how large until probably mid-June,” said Ward 6 Councilmember Steve Kozachik. “We need to budget assuming the titanic and hope to be surprised.”

UA President Robert C. Robbins said last week during an appearance on Bill Buckmaster’s radio show that he didn’t see football games returning in the fall, although the university would resume face-to-face classes.

Robbins has warned that a return to normal life could months away—or longer. “Until there's a vaccine, we’re never going to be completely risk-free,” Robbins said. “That’s probably a year at least before we would have a vaccine.”

Robbins also said that the UA was bracing for the possibility that many out-of-state and international students might not return to campus in the fall because of the outbreak, which could lead to financial calamity for the university as the bulk of the university’s tuition revenue comes from those students.

The UA has announced furloughs for all employees, along with other pay cuts for high-paid employees.

The University of Arizona is working to produce 250,000 tests for COVID-19 antibodies. Such tests could tell people if they have already been exposed to COVID-19, which is deadly to some patients while others remain asymptomatic. Testing for antibodies could identify people who are no longer at risk for catching COVID-19, although there have been reports of people coming down with the disease after beating it once.

Ducey said the state would use the tests healthcare workers and first responders, while Robbins plans to use them to test students, faculty, and staff at the university.

That first phase of those tests, which will include 3,000 samples, will begin in Pima County this Thursday, April 30.

Ducey also is requiring staff at nursing homes and similar facilities now have to wear personal protective equipment and institute symptom checks for anyone entering the building. In addition, residents must be provided with a video device to communicate with the outside world, according to an executive order.

In the face of the spreading virus, Ducey has also halted residential, business and nonprofit evictions; loosened regulations to make telemedicine more available and increased eligibility for AHCCCS, the state's Medicaid program; and activated the National Guard to assist at grocery stores and food banks.

Courts have rescheduled most hearings to avoid spreading the virus.

COVID-19 symptoms typically occur two to 14 days after exposure, and include headache, fever, cough, and shortness of breath, according to the CDC. However, some cases of the virus are entirely asymptomatic. Practices to avoid infection include social distancing (of at least six feet), washing your hands, avoiding unnecessary trips, and not touching your face. COVID-19 can survive on cardboard for up to 24 hours, and on stainless steel and plastic surfaces up to three days.

If you think you have been exposed to COVID-19 and develop a fever, cough, or difficulty breathing, speak with a healthcare provider for medical advice. According to the CDC, people who are mildly ill with COVID-19 are able to recover at home. Stay at home and avoid public transportation, but stay in touch with your doctor. If you do leave your home, wear a facemask, and clean your hands often. If you develop more severe symptoms (persistent pain or pressure in the chest, confusion, bluish lips) get medical attention immediately. Your local health authorities will give instructions on checking your symptoms and reporting information.