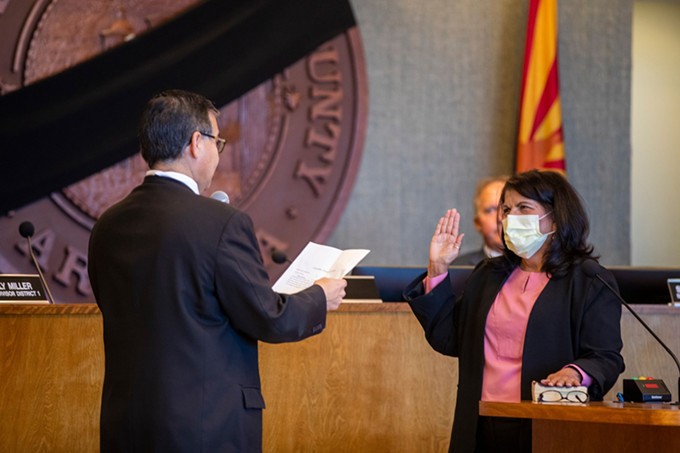 Incoming District 5 Supervisor Betty Villegas is sworn in by Chairman Ramon Valadez on Thursday, April 9. The Pima County Board of Supervisors appointed Villegas after a 3-1 vote on Tuesday, April 7.

Newly minted Pima County Supervisor Betty Villegas describes her first day on the job as bittersweet as she enters the office of her former colleague and friend, Democrat Richard Elias, who died of a heart attack in late March after nearly two decades representing District 5.

The Pima County Board of Supervisors appointed Villegas to the position in a 3-1 vote earlier this week.

“This experience is bittersweet. I never really imagined I would find myself in this position,” Villegas said. “It feels almost surreal to be in his office where I visited many times. I told Mr. Huckleberry I want to leave everything as-is.”

Villegas said she was surprised to see a gift she had given Elias when he first appointed District 5 supervisor was still in his office. Elias took over for then-Supervisor Raul Grijalva, who left the office in 2002  to run for the congressional seat he still holds today.

“I remember when he was first appointed going in (Elias’ office) and it was pretty empty at the time,” Villegas said “I gave him a zen rock garden, you know, with the sand and little rake. He still has it there."

The incoming supervisor said everything in Elias’ office—gifts, awards, things he collected—is a reflection of who he was as a person and what the community thought of him. She hopes to continue Elias’ legacy of being dedicated to the community he loved.

“It’s very inspiring to do (Elias’) work and do it right. So that’s what I’m going to concentrate on,” Villegas said. “You can’t fill his shoes. He was a huge personality who cared for his community. I’ll do the best that I can.”

This isn’t the first time Villegas has taken over a position held by Elias. She took over as program manager for Pima County Affordable Housing Department after Elias was appointed to Grijalva’s District 5 seat.

“The ironic thing is that I moved into (Elias’) spot when he moved to county supervisor and now I’m taking his spot again,” Villegas said.

While in office, Villegas said her focus is going to be on helping Pima County constituents during the COVID-19 outbreak by making sure state and federal funding is going where it needs to go in a quick and uncomplicated manner.

“Going into this position when nothing is normal you have to think, “What can I do with my experience and skills, and what would Richard do?” Villegas said. “Even though the funding has been allocated, the process of how to get it out to the masses is still not really clear. But we need to make it as uncomplicated as possible.”


Villegas understands how difficult coronavirus fears and shelter-in-place orders are on the community, not only financially but mentally. She said she hadn’t left her home until having to sign the oath of office this past Wednesday. Upon leaving, Villegas said she felt vulnerable, just like most people these days.

“We’re all feeling so vulnerable. Before I signed the oath on Wednesday, I hadn’t left my house,” Villegas said. “When I went outside, I wore my mask and felt protected, but I thought, 'Wow, this must be something every person is probably going through.' We need to make sure everyone feels safe.”

Your Southern AZ COVID-19 AM Roundup for Sunday, April 12: Number of Confirmed Cases Rises to 3,539 in AZ; Recoveries in the U.S. top 32K