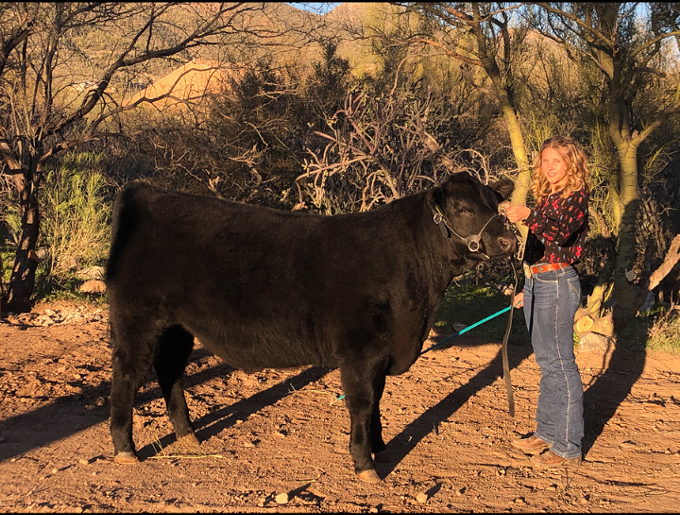 Courtesy photo
Ella Levin stands with her steer she raised at her family's home as a part of her 4-H training. The 1,200-pound steer will be sold at the upcoming PCJLSI online auction with the majority of the proceeds going to the 14-year-old and her family.
A local charity is helping youth members of Pima County 4-H and Future Farmers of America after their annual livestock auction moved online when this year’s Pima County Fair was canceled due to the COVID-19 pandemic.

The Los Charros Foundation Inc. is purchasing $25,000 worth of small and large livestock from members of the two groups at this year’s online auction, hosted by the Pima County Junior Livestock Sales Inc. The foundation typically spends about $5,000 at Southern Arizona county fairs in Pima, Santa Cruz and Cochise counties, said board member Richard Bratt. After this year’s Pima County Fair was canceled Bratt said he knew the organization had to do more.

“This year, we’re reallocating $25,000 from our scholarship fund because these kids didn’t get to have the Pima County Fair where they could auction,” Bratt said. “These kids are getting hurt after spending all year and spending their own money buying feed and supplies.”

Bratt said he was concerned local 4-H and FFA youth would ultimately be losing money typically used for their higher education after recouping feed and supply cost accrued raising the animal.

Pima County 4-H Manager Josh Moore said he knows from firsthand experience how much raising and selling animals at county fair auctions mean to youth trying to pay for trade school or college. He joined 4-H at nine years old and continued with the program until he turned 18.

“I grew up in a very small rural county and I did the same program,” said Moore. “It definitely paid for college and grad school and it was nice to be able to save up enough money to help fund a portion of my schooling myself.”

“In the past, we’ve had beef prices sell for about $10-a-pound which is quite significant when you consider a steer can weigh up to 1250 pounds as the maximum payout weight,” Moore said. “We’re not sure what we’re going to see this year though.”

PCJLSI livestock buyers are typically companies, charity organizations and local individuals who want to help fund the futures for children interested in agriculture, Moore said. Programs like 4-H help children learn a variety of life skills that can be applied to their careers and throughout their lives, according to Moore.

“We train kids to meet animal quality assurance to make sure they are raising a safe food product. Kids get hours upon hours of instruction with our volunteers,” Moore said. “A lot of times we have sponsors in the industry that will buy the animal for the kids and train them how to raise it.”

Ella Levin, a 14-year-old 4-H member, is getting ready to auction her black angus steer she’s been raising for the past eight months. It’s the sixth steer she’s raised and auctioned since joining the organization at 9 years old. The eighth-grader said being in 4-H is in her family’s blood.

“My grandmother started in 4-H back in Kansas,” she said. “Then my dad and the whole family have also been involved with 4-H. My older sister was in it and I always looked up to her. I wanted to show cattle so I started when I was in third grade and have been in it ever since.”

She said it was intimidating being around half-ton steer at first as a 9-year-old, but her father gave her some good advice.

“I was really small and it was a big calf, but my dad always told me I’m the boss of this steer,” Levin said. “After the first week or so I became really close to him and wasn’t scared anymore. It’s definitely toughened me up.”

Levin said at first it was hard parting with the steers she’s raised after becoming close with them. But over time, Levin said she’s accepted the notion “this is what we’re here to do”.

“My first four years it was huge,” she said. “Even weeks before selling them I would be very sad. But in the last few years, I’ve realized this is what we’re here to do. We’re learning about how to raise and sell these animals for consumption. So it’s not really that sad anymore.”

Levin said she hopes to receive a scholarship to an agricultural college. Ultimately she would like to become a livestock judge and said she appreciates being in 4-H because the program has given her “insight at what livestock judging would look like.” More so than that, Levin said 4-H has taught life skills she didn’t have before.

“The program has given me a better work ethic. What needs to get done, needs to get done,” Levin said. “I’ve learned to be more efficient with my time and I have much better communication skills. Before I wouldn’t talk much, but now I look people in the eye and can have a good conversation.” 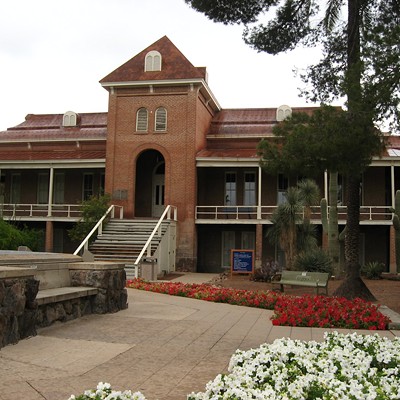 Your Southern AZ Coronavirus PM Roundup for Friday, April 10: The Good, The Bad, The Unfortunate