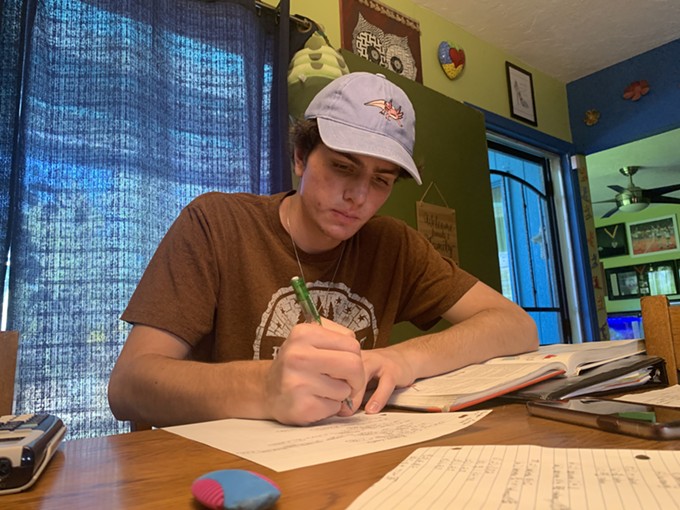 Courtesy photo from Doreen Rouille of her son, Xander
When Ironwood Ridge High School English teacher Doreen Rouille thinks about students not returning to the classroom this year, it’s like the end of a bad movie.

“The screen just turns black,” she said. “It’s over and you’re looking around asking, ‘What happened?’”

What began as an extended spring break has turned into a uniquely disappointing and difficult situation for Doreen and the tens of thousands of other teachers across Arizona working from home or in empty classrooms after Governor Doug Ducey and Superintendent of Public Instruction Kathy Hoffman extended school closures through the end of the year.

Doreen saw the initial closure as something like a gift; an extra week to take off and relax before heading back to work. Now, she’s more concerned about not getting to say ‘goodbye’ to a whole class of graduating seniors.

“It's really heartbreaking because I love my students,” she said. “The year is over and I don’t get to say ‘goodbye’ and have closure with them. That’s a very difficult thing to have happen.”
Though she isn’t greeting her students in person anymore, Doreen still sees them every day on a computer screen when they log into her video conferences and receive instruction. But it’s just not the same.

According to Doreen, some of her students are handling the school closure well—while others are clearly struggling with the change to their everyday lives.

“You see it on their faces—they’re sad,” she said. “Some of them are enjoying doing school on their schedule, they can sleep in and play their video games and walk their dogs and then start school at 3, 4, 8 o'clock in the afternoon. But what I’m hearing from them is they didn’t realize how much they needed school. How much they appreciated the structure and how much they depended on it to be social, to see their friends and have structure in their day.”


Whether lost, bored, anxious or somewhere in between, the complete upheaval of their academic pursuits has left many graduating seniors wondering if all the hard work over the past four years was even worth it.

Despite the difficult times, some students are dedicated to staying positive and motivated.
Doreen’s son, Xander, is a senior at Ironwood Ridge and said he’s found motivation in his Advanced Placement classes and hopes he can still earn some college credit by acing the AP exams.

Even though he’s still on top of his schoolwork, Xander wasn’t shy about expressing how difficult it is to work from home sometimes.

“I feel like it’s just gone downhill, almost,” he said. “Not that my grades are any worse, but you have less motivation to do your work. It’s harder to learn from videos than an actual teacher in the classroom, so I feel like it’s a worse learning experience, for myself at least.”

Aside from the difficulties of online learning in a public education system that’s had to drastically shift its practices in just a few weeks’ time, Xander said the hardest part about not being in school is missing out on time spent with his friends.

That desire to spend time with friends was shared by fellow Ironwood Ridge senior Mackenzie Kester, who said she was looking forward to spending her last few weeks of high school making memories before heading to Arkansas for college.

A member of the Key Club, the swim team and the high school’s Site Council (and a National Honors Society scholar), Kester said she is missing out on a lot of irreplaceable moments.
“I couldn’t even remember my last day of high school,” she said.

Despite the loss, Kester said she’s staying positive by keeping her mind occupied and getting her school work done. She’s even picked up drawing and scrapbooking in her free time.

While he acknowledges that missing such key events in the high school story is a disappointment, Woodard believes that kids his age are resilient.

“Even though everyone was looking forward to [graduation] and there’s a possibility that we’re not going to have that graduation after seeing our cousins, brothers, and friends over the years...I did it, I put in the work. If that isn’t going to happen, I think we're going to be okay,” he said.

The Arizona State Board of Education met March 31 to discuss whether graduating seniors would still receive their diplomas at the end of the year, and unanimously approved handing out diplomas to the roughly 86,000 upcoming graduates.

Schools will also be allowed to determine if a student made use of educational resources available to them while schools were closed when assessing if a senior should graduate.

After Ducey and Hoffman made their announcement ending in-school activities for the year, the Marana Unified School District announced in an email that it would forgo the 2020 graduation.
Superintendent Doug Wilson also said the district would not host any promotion or prom night events, in addition to any musical, dance or drama shows and sports practices.

“I want to stress that we are working to find alternative ways to celebrate and acknowledge these important milestones for our students and we will continue to share information in the days ahead,” Wilson wrote.

Amphitheater Public Schools has not yet made a decision regarding graduation, according to Communications Director Michelle Valenzuela.

“The discussions are ongoing,” Valenzuela told Tucson Local Media. “As of now, our graduation ceremony events remain in place as originally scheduled. We will continue to evaluate the matter as circumstances warrant.”

Educators and students alike feel like closing schools was the right decision to make. They also agree that losing this year’s graduation ceremonies will be an irreplaceable moment in their lives, but that it’s for the better.

“I think it will be pretty detrimental to our spirit...It would be really disappointing,” CDO senior Woodard said about potentially missing graduation. “But I also feel that my class is pretty resilient. I feel like everything we’ve gone through as a school, and students all around for the past almost two decades. I feel like we’ve overcome a lot.”

Prom and graduation aren’t the only big events in high school life that students are missing out on this year. For some, the closure also meant the end of athletics.

While he was able to finish out his senior football season, Marana High School’s Ephraim Amissah will miss out on one last chance to show his mettle in track and field.

Even though he’s on his way to play collegiate ball at Western New Mexico University, Amissah acknowledged that several of his track teammates may miss out on their own chance to earn a scholarship through sports.

“I feel so bad for them,” he said. “I don’t know where I would be in that situation.”

After schools were officially closed for the rest of the academic year the Arizona Interscholastic Association announced that closures included all school-sponsored extracurriculars and state championships.

Despite missing out on track and field, Amissah said he’s keeping himself busy with a workout guide sent to the team, and doing more push-ups and sit-ups than he can count to stay fit for football.

“My mindset through all of this is trying to stay positive and look at all the plusses,” he said. “I want to put this behind me, but at the same time, it will always be in the back of my head...It seems negative now, and it’s hard. We feel like we’ve been robbed, but it’s kind of like our story, I guess. This is something we can say that no other class went through in their senior year. This is what we have.”

Ducey: Visitors Entering AZ From Places With Substantial COVID-19 Spread Will Have to Quarantine Themselves for Two Weeks