You Can't Go To the Fourth Avenue Street Fair, but You Can Support Merchants Via Virtual Street Fair 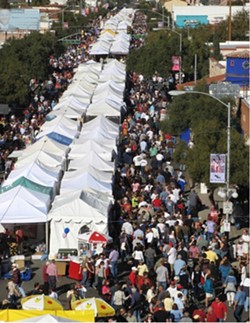 Fred Ronstadt, executive director of FAMA, said he was at a loss when it became clear the spring street fair would need to be canceled. The street fair, held twice a year, accounts for nearly half of the association’s revenue to maintain the avenue, Ronstadt said. But more importantly, he knows how much street fair season means to Fourth Avenue merchants before going into triple-digit weather.

“It’s the revenue we use to take care of the avenue, pick up trash, clean the streets and market events,” Ronstadt said. “But it’s especially tough on the merchants. This is the revenue they need to get through summer.”

“When we saw the event was cancelled, we saw there was no way to easily find the vendors, it was all in a PDF. So we decided to take the data and throw together a simple, static website,” Dempsey said. “This is not even close to what we do. We went from idea on that Thursday to done by Friday.”

The virtual street fair highlights all the booths that would have participated this year, with links to peruse and purchase their crafts. The page has received over 25,000 click-thrus in under a week of going live, said Ronstadt.

But the virtual street fair isn’t the only thing individual Fourth Avenue merchants have planned for Friday. Lizzie Mead, owner of Silver Sea Jewelry, and her crew are also taking matters into their own hands since closing up shop due to the COVID-19 pandemic.

“Right when they decided street fair was not going to be a go, I realized I was super overstretched and I’ve dumped all my money into products for street fair,” Mead said. “So, I just tried to come up with a solution.”

Silver Sea Jewelry is hosting Merm-Aid on Facebook Live, showcasing their handmade jewelry in the style of the Home Shopping Network for eight hours, starting at 11 a.m. Friday morning.

“We’ve had a lot of juice for our live sale already on Facebook and that’s been great,” Mead said. “The most important thing right now is my employees because they’re my best friends.”
Mead said she hopes her live-streaming sale will help her be able to give street fair bonuses to her employees in addition to their hourly rate, as that’s something she’s done since moving to Fourth Avenue 11 years ago.

“My feeling was let’s do this live sale and try to get (her employees) what they would’ve made at street fair,” Mead said. “The goal of this sale is to help them pocket more money to get them solid.”

For Mead, having street fair canceled is especially hard. Not only do those three days account for over two months of income, she said, the jewelry maker also has to start making her inventory months in advance. Mead said she hopes to be able to recoup the money she's already spent.

“The best thing I can do at this point is come up with a way to at least try to make up the prep-money I spent for street fair,” Mead said. “Not try to make the money I would have made. I would just like to make-up what I invested.”


Down the avenue at late-20th-century vintage store Generation Cool, owner Slobby Robby Hall is also preparing for a live-streaming sales/entertainment event on Instagram’s IGTV this Friday at 9 p.m. The Slobby’s World star said he’s planning on “going all out” to give his fans what they want.

“We’ll be in there, live, showing off new product and trying to give our customers the experience they’ve come to expect,” Hall said. “We’re just reacting to the lack of business on the street. If we need to move it online, that’s no problem. (Online) was always making money for us.”

Hall said the Tucson store is by appointment only during the pandemic. Hall foresaw the shutdown happening when his Las Vegas store closed its doors on March 11, due to COVID-19 concerns and “a rough couple weeks” of business.

“I anticipated street fair not happening when we shut the doors on (the Las Vegas location),” Hall said. “I knew we’d be missing out on that money probably a week before it was announced.”

But Hall said he isn’t too concerned, at least at the moment, as long as the internet is connected. Online sales have been Generation Cool’s bread and butter during slow, summer months in Tucson. Hall said he hopes online sales keep going strong.

“We’re preparing for the worst, hoping for the best and having fun in the meantime,” Hall said.

As of today, Arizona Department of Health Services report, seven people in Pima County have tested tested positive for COVID-19. In Arizona, a total of 44 people have tested positive. Among state tests, 130 cases are still pending and 175 have been ruled out. Private labs are also conducting tests that add to the total number of cases. Statewide numbers updated here.

According to the CDC, COVID-19 symptoms typically occur two to 14 days after exposure, and include fever, cough and shortness of breath. However, some cases of the virus are entirely asymptomatic. Practices to avoid infection include social distancing (of at least six feet), washing your hands, avoiding unnecessary trips and not touching your face. COVID-19 can survive on cardboard for up to 24 hours, and on stainless steel and plastic surfaces up to three days. If you think you have been exposed to COVID-19 and develop a fever and symptoms, call your healthcare provider for medical advice. For more information, visit the Centers for Disease Control and Prevention.