A regular on Sirius FM and winner of festival awards across the US, Grant Lyon headlines this month’s Brew Ha Ha showcase at Borderlands Brewing. The show’s producers, Tucson comedians and co-hosts Matt Ziemak and Rory Monserrat, thus continue to expand their reach into the national talent pool while somehow maintaining a $5 admission price. Get it while it lasts at squareup.com or at the door. The show is at 8 p.m., Monday, March 16,

Comedy fans might recognize Lyon from the Comedy Central Show, Corporate, and his starring role in the Amazon Prime feature film Killer Kate. He’s been on Funny Or Die, the nationally syndicated Bob and Tom Radio Show and the popular podcast Doug Loves Movies, as well as national commercials for AT&T and Johnsonville Sausage.

What sets him apart comically is a smart approach and surprising insights. Reviewers often cite his originality and fresh humor, rooted in fun facts and unassailable logic.

Kids’ comedy at the Tucson Festival of Books

Kids can play at improv comedy with F.O.M.P. (Friends of Make Pretends), at 10 a.m., Saturday, March 14, at the East Food Court (Science City) Stage. The stage is on the east side of Cherry Ave. on UArizona mall just south of Flandrau Planetarium. Presented by Tucson Improv Movement, this free show is usually performed every second Saturday at TIM Comedy Theater.

At age 42, Terry Fator’s family-friendly comedy flair swept season two of America’s Got Talent. That’s when his career veered from itinerant county fairs to a ten-year residency in Las Vegas. Fator returns to Desert Diamond Casino on Saturday, March 14. The show is at 8 p.m.; reservations are $40 to $69.50 through ddcaz.com.

Impressions are Fator’s stock in trade, but he also mixes music and puppetry into his sets. The Mirage Hotel and Casino in Las Vegas dubbed him “The VOICE of entertainment.”

If drag ballet were an Olympic sporting event, The Trocks would have retired the gold for gag. Theirs is, in a sense, a sport; training is grueling and often painful. The corps must perform with the precision and delicacy of ballerinas, but with the unbridled spirit of a pratfall. The costumes are, as Ru Paul fans would say, sickening.

The Trocks experience is a timely antidote to whatever hurts. You literally can’t be serious. They perform at 7:30 p.m., Wednesday, March 18 at Centennial hall. Tickets are $38 to $60 via UApresents.org.

Elias “Lefty” Caress presents his Majestic Magic Show in Clean Comedy Tucson’s Marana Laughs series, 7:30 p.m. Friday, March 13, at the Coyote Trail Stage, and in its Vail Laughs series at 7:30 p.m., Saturday, March 14, at Vail Theatre of the Arts. Reservations are $10 via maranalaughs.com and vaillaughs.com. 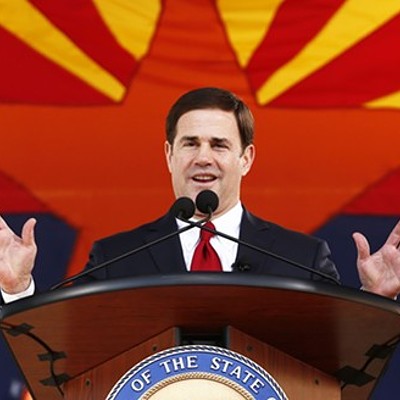