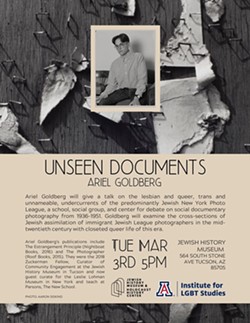 Unseen Documents with Ariel Goldberg. Have you heard of the New York Photo League? It was a predominantly Jewish school, social group and center for debate on social documentary photography from 1936 to 1951. In this talk, Ariel Goldberg, author of several books, including The Estrangement Principle and The Photographer, will be talking about the group’s lesbian, queer and trans undercurrents. They’ll also be discussing the cross-sections of Jewish assimilation of immigrant Jewish League photographers with closeted queer life in the mid-20th century. Come learn more about this slice of Jewish history at this enlightening talk. 5 to 7 p.m. Tuesday, March 3. Jewish History Museum, 564 S. Stone Ave. Free.

25th Annual High School Art Invitational. More than 100 high school art and photography teachers were invited to submit their students’ work to this exhibit at the Joel D. Valdez Main Library, and now you get to see the results on display throughout March. A jury of artists and representatives from arts organizations judged the work in six categories: best drawing, best painting, best mixed media, best sculpture, best photography and special recognition. But there’s something special about each of these pieces by up-and-coming young artist. On display from Tuesday, March 3, to Tuesday, March 31. Joel D. Valdez Main Library, 101 N. Stone Ave. Hours are 9 a.m. to 6 p.m. Monday through Thursday, 9 a.m. to 5 p.m. Friday, 10 am. To 5 p.m. Saturday and 1 to 5 p.m. Sunday. Free.

Type-in Tuesday. If you have guests in town this week and want to give them a taste of the Old Pueblo’s quirky culture, this event is certainly a good fit. Head over to a Public Brewhouse, a brewery off of Fourth Avenue with exposed brick walls and plenty of board games, and spend the evening typing on an old school typewriter. Friends of the brewery are bringing them in by the dozen, so you can get your creative juices flowing, analog-style. Write a poem, write a short story, write a love letter, write your shopping list! It’s all going to be way more fun at this event. 6:30 p.m. Tuesday, March 3. Public Brewhouse, 209 N. Hoff Ave. Free.

UA Presents award-winning musician Ingrid Jensen, who has been hailed as one of the most gifted jazz trumpeters of her generation.. At Crowder Hall…

La Bamba. As part of their Tuesday Night Classics series, Harkins Theatres is screening the film that celebrated the life and music of Chicano rock ‘n’ roll star Ritchie Valens. With a celebrated acting role from Lou Diamond Phillips, La Bamba is considered a standout of the “Hispanic Hollywood” film period of the late ’80s and ’90s. It should make sense the film carries such a legacy, as Valens himself (who died at only 17 years old!) has left such a massive impact on music in such a short amount of time. In 2017, La Bamba was even selected for preservation in the United States National Film Registry by the Library of Congress. 7 p.m. Tuesday, March 3. 5755 W. Arizona Pavilions Drive & 5455 S. Calle Santa Cruz. $5. 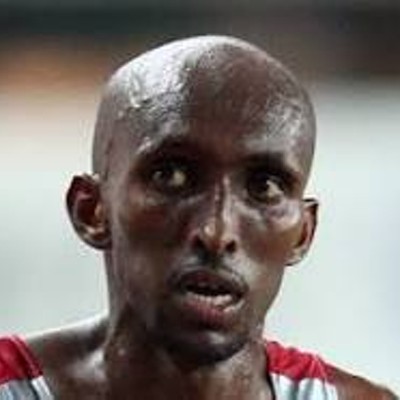 Claytoon of the Day: Hard Ballin' For Biden