This new sound particularly shines in “Good News,” which opens with psychedelic layering before taking off with aggressive drums and jerky guitar. While venturing in new directions, vocalist Gabi Montoya continues to show her prowess in delivering surfy punk melodies which made their debut EP so much fun.

“Good News is about coming to terms with leaving religion,” Montoya said. “I was Christian until I was about 22 and the mental/emotional trauma that resulted from feeling lied to and manipulated my whole life inspired me to liken God to an abusive partner or parent. I had to take a lot of Bible classes in college and I can probably list every abusive or murderous crime the Judeo-Christian God committed against his own creation. After being judged by Christians for years, this was me finally saying, ‘ok you know what? I think I would actually rather go to hell than spend eternity with you judgmental assholes’.”

“Kicks Rocks came to mind after hearing of several instances of white people calling the police on black people for innocuous things like barbecuing or hanging out in Starbucks. Also, being a woman and getting harassed all the time provides a wealth of songwriting material,” Montoya said.

Suffice to say these two new tracks work as great appetizers for the new directions Taco Sauce is headed in, while maintaining the heavy and sarcastic tones that made them win Tucson’s best punk band in Best of Tucson two years in a row.

Listen to the new songs on Taco Sauce’s bandcamp. After their Kick Rocks tour concludes, Taco Sauce will play at Club Congress on Wednesday, March 18.

UA Breaks Ground on Tech Park at The Bridges 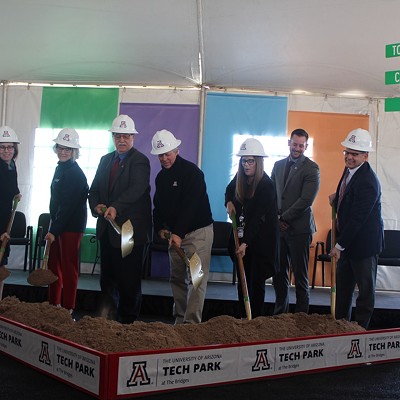