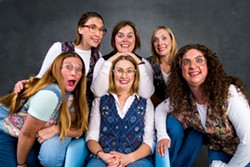 Cactus Flower Comedy Festival. Thank goodness for comedy fests like this one, which feature some of the funniest women and gender non-conforming performers in town, and from out of town too! Acts include Female Storytellers, The Charles Darwin Experience, #PurseWine and a Beginners and Veterans Stand Up Comedy Show. PLUS, they’ve got workshops, so that you, too, can become funny! Shannon Stott and Jill Bernard are hosting two workshops apiece throughout the weekend. Come on down for some laughs and some learning! Thursday, Feb. 27 to Saturday, Feb. 29. Shows and workshops at various times. Tucson Improv Movement, 414 E. Ninth St. Shows are $5 to $7, or $40 for an all-access pass. Workshops are $40.

Alpha (Free screening). The University of Arizona School of Animal and Comparative Biomedical Sciences is hosting a screening of the 2018 historical adventure that tells of the formation of the unlikely bond between humans and canines. This survival film takes place in Paleolithic Europe some 20,000 years ago, and follows a young man in a small tribe of hunter-gatherers. Stay tuned after the film for an expert panel of UA faculty from the Arizona Canine Cognition Center, School of Animal & Comparative Biomedical Sciences and more. 6 to 9 p.m. Thursday, Feb. 27. At the Gallagher Theatre, 1303 E. University Blvd. Free and open to the public.

Still traveling on the road to “Shambala,” founding member Danny Hutton brings a message of unity as captured in chart toppers “Black And White,” “The Family of Man” and “Joy to the World,”
click to enlarge 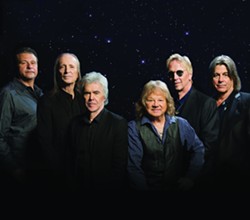 Brian Tristan’s (aka Kid Congo Powers) résumé includes stints as guitarist for The Gun Club, the Cramps and Nick Cave and the Bad Seeds. Much like the title to their fourth album, La Araña Es La Vida, Kid Congo & The Pink Monkey Birds summon the Mexican muse of The Great Spider Goddess of Teotihuacan—protectress of the underworld who benevolently sprouts hallucinogenic morning glories—to rock the shop. At Wooden Tooth Records. Flanked by Chick Cashman and Miracle Mile…

From humble beginnings in Fort Worth, propelled by hits like “Novocaine” and “Oh My Dear Lord,” The Unlikely Candidates now find themselves living the dream as major label indie rockers. At 191 Toole…

A night of punky pop and emo goodness awaits. The Rare Occasions with special guests Stripes, Carnival and The Sinks explode in a rainbow of sugary flavor. At Club Congress…

As a youth, in Cananea, Sonora, Salvador Duran’s discontent with the socio-economic and political circumstances found a vent-hole in art. “I sing my paintings and I paint my music,” he told Arizona Public Media. With a guitar in hand, a harmonica around his neck and stomping box under foot, Duran sings out. At R Bar…

The Nocturnal Noise Concert Series continues with Pocket Sand and The Distortionists. At Thunder Canyon Brewstillery…

They are “raw and colorful, bathed in electro-sensual alien lullabies and drunken sailor beats.” Loki Moon experiment with songs. At Cafe a la C’Art…

Tags: music , screenings , the list , things to do , comedy , Image