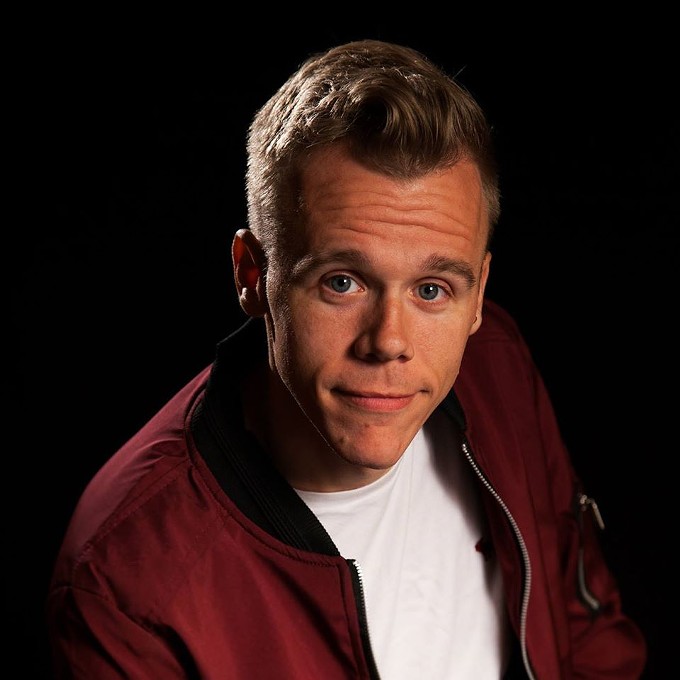 facebook.com/andrewriverscomedy
Just a hard-working guy taking all roads to the top with his gift for comedy, Andrew Rivers performs at The O, Friday, Jan. 28.
Laughing Stock
By Linda Ray

In a backwards ball cap, Andrew Rivers looks a little like Eminem without the pout or the baggage. His affect is a that of a slightly more animated Seinfeld. There’s no threat to his roll, but his comedy won’t let you get away.

Easily relatable, his jokes emerge unexpectedly from stories of life on the road with a not-that-weird upbringing in the rearview. His Dad was a well-known local radio personality and, as he tells it, his mom a lifelong chain- pot-smoker. Looking for love just leaves him bewildered.

Rivers’ laser-focused commitment to the comedy grind keep him on the road half the year. “Now that I’ve had some accomplishments and a comedy special. I’m hoping to take advantage of (it) and just book my own tours.

“I can’t keep plants or animals alive,” he says, “but there is something growing in my fridge right now. I haven’t named it yet.”

The comedy special Rivers’ cites drew 15 million Facebook views. His Dry Bar show, a 42 minute video of clean comedy, is available from his website along with two, full length CDs and a recording of jokes he made on his cell phone for each town he visited in 2016. He’s also in lots of podcasts.

“Having more outlets means more eyeballs on comedy. People can read this and then Facebook stalk me and buy tickets to the show within 5 clicks!”

There may never be a better name than “Leap of Faith” for this loosely-quarterly fundraiser for the Leukemia and Lymphoma Society. Like some ancient ritual, the event always coaxes a couple of Tucson’s leading women off the cliff into their first-ever standup comedy set. Miraculously, they find thunderous applause from a room full of friends and well-wishers. It almost always sells out.

Reservations are available for $15 via co-organizer Mary Steed’s LLS fundraising page at https://pages.lls.org/tnt/az/hikepnw20/MSteed. Laff’s has a two-item minimum.

My Bloody Valentine: A Comedy Showcase

Comedy at the Wench explores all the ways love can go wrong with its monthly comedy showcase at 7 p.m., Monday, Feb. 24. Comedians include locals Allana Erickson-Lopez, the stand-up half of the improv duo Allreddy; Aaron Panther, Eden Nault and recent Austin ex-pat Joe Tullar. Headlining is Curt Fletcher, who has been compared to Steven Wright and Mitch Hedberg. Also featured is Tamale Sepp, stopping by while living the dream on a two-year tour in her van.

This event has been selling out, and the layout makes it wise to arrive early to get a seat and order food and drink before the show. Reservations are $5 on Eventbrite.com.

This great annual festival of female funny runs Thursday through Saturday, Feb. 27 through 29 at TIM Comedy Theater. There will be lots more about this in next week’s Laughing Stock, but it kicks off Thursday, with Tucson’s beloved F*ST (Female Storytellers) sharing their favorite stories of 2019 a 7:30 p.m. The 9 p.m. show features women from Allreddy, Harold Team Omega and sketch comedy by the women of TIM’s Baby Fish Mouth sketch team. The shows are $7, or included with a $30 fest pass.