Let the Sunshine In. The University of Arizona’s Department of French and Italian Studies is hosting a special screening of the 2017 romantic drama directed by Claire Denis (Beau Travail, 35 Shots of Rum). This French film tells of a battle of the sexes, centering on a 50-something Parisian artist played by Juliette Binoche. It won the SACD (Authors Society) Award at the Cannes Film Festival. This screening is part of the Tournées Film Festival, and will be introduced by Ania Wroblewski. 7 to 9 p.m. Thursday, Feb. 13. At the Integrated Learning Center on the UA Campus, 1500 E. University Blvd., Bldg. 70, Room 130. Free and open to the public.

The Light Princess. This show, a musical adaptation of a George MacDonald fairytale, is full of magic and delight and everything you could ask for in a fairytale. When a king and queen desperate to have a child turn to a witch for help, their daughter is born without gravity (classic witch move). If they don’t get this girl grounded before her 16th birthday, the kingdom falls into the hands of the witch. Princes, wise men and a cast of other characters take the stage in this adaptation by award-winning duo Lila Rose Kaplan (book) and Mike Pettry (music & lyrics). 7:30 p.m. Thursdays through Saturdays and 2 p.m. Sundays through Feb. 23. Scoundrel & Scamp Theatre at the Historic Y, 738 N. Fifth Ave. $30 GA, $28 seniors 55+, $15 student & teacher.

International World Market. This gem show is new to the Mercado District this year, and will be hosted alongside the African Art Village, which is making its annual return. They’ve got wholesale and resale prices with the ambiance of the Mercado District, which is always a win. Head on down to snag a last-minute Valentine’s Day gift, or perhaps take your Valentine here and let them pick out a gift themselves. (Even more perfect if you’re your own Valentine—treat yourself!) 7 a.m. to 6 p.m. Thursday, Feb. 13, to Sunday, Feb. 19. 279 S. Linda Ave. 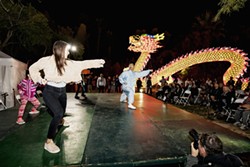 Asian Lantern Festival. The Reid Park Zoo, Tianyu Arts & Culture Inc, UA Global and the Tucson Chinese Cultural Center are partnering to produce this cultural festival featuring more than 400 larger-than-life, interactive lanterns. Be transported across the world with Asian-inspired cuisine and culture, as well as live entertainment including dance, music and acrobatics. There are also weekly crafts and games like Mah Jong, Chinese Checkers and an origami station! 6 to 9 p.m. Thursday, Feb. 13, to Sunday, March 29. (Thursday through Sunday until March 1, then nightly from March 5 to March 29). Reid Park Zoo, 3400 Zoo Court. $18 adults, $16 kids 2 to 14, free for kids 1 and younger, $2 off for members.