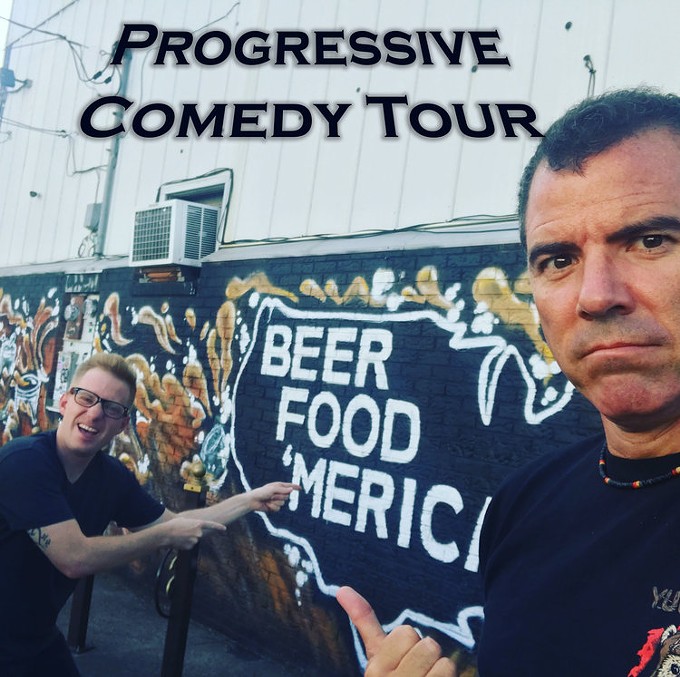 Pilloried politics at The O

Graham Elwood and Ron Placone mean for their Progressive Comedy Tour to entertain us. Obviously, they don’t define “progressive” the way established political parties do. They see humans as progressive, and politics, with its sycophant national media, as the sludge of corporate greed. Since Placone is bringing his guitar, audience members might join in the chorus of a familiar protest song with new lyrics hilariously pillorying, say, both CNN and Fox News.

“I started talking about politics as soon as I started comedy,” Placone says, “because what interested me in comedy was people like George Carlin and Bill Hicks…. Now, if you see my act, you’re going to hear … more about the world around me and why I feel the way I do…. I’m talking about the system as a whole and the civility of our system, so people of all different political ideologies connect with that and see humor in it.

“People are really divided right now but we have to navigate the best we can. If we can all get into a room and realize that (our system) is fully broken, and that’s something we fully agree on … we can all get together and laugh about it, that’s a good start.”

Elwood and Placone have both built nationwide reputations as political comedians via tireless touring and podcasting. A 20-year comedy veteran, Elwood's comedy has sometimes been called scary and crazy, but it's plenty funny enough to make the rounds on Comedy Central. He co-hosts the Comedy Film Nerds podcast as well and frequently appears on the Jimmy Dore Show and Aggressive Progressive, which spawned the YouTube show and podcast, The Political Vigilante. Elwood’s also co-creator of the Los Angles Podcast Festival, has performed seven USO tours and, for a time, hosted Strip Poker on the USA channel.

Ron Placone can be seen regularly on The Jimmy Dore Show and The Young Turks, an independent newscast with a comedy twist. He hosts the world’s first viewer-curated streaming news show, Get Your News On With Ron, putting mics to his theory that the only news worth paying attention to is independent local media. He’s also often seen or heard on SiriusXM, TMZ, RT and FreeSpeechTV.

The Progressive Comedy Tour Show comes to The O at 8 p.m. Saturday, Feb 8. Admission is $15 via brownpapertickets.com.

The city that brought us 2nd Saturdays takes some of the fun indoors, too, in case we’re not quite dressed for after dark. The 2nd Saturday Comedy Showcase at The Screening Room packs the Feb. 8 showcase with 16 comics to keep you laughing from 8 p.m. until the food trucks and vendors shut down.

What are you giving your sweetheart for Valentine’s Day? How about a laugh. You can celebrate your emotional privilege and the human comedy that is romance. The rest of us will be celebrating our pals at Blackrock Brewers’ PALentine’s Day Comedy Show at 8 p.m., Friday, Feb. 14. The show is free as part of Mo Urban’s ongoing series at the far eastside spot. She hasn’t yet revealed the lineup, so stay tuned to the Facebook event.

Claytoon of the Day: Ripping Trump A New One