Tucson Roadrunners vs. Colorado Eagles. It’s bird vs. bird at this weekend’s two home games for our local hockey team. Friday is “I Love Gems” night, which features an actual wedding on the ice! They’ve also got family four-packs, which include four tickets and four Roadrunners hats or beanies for just $80. Saturday is Harry Potter night, which means you get to jump on Nimbus Two Thousand and chase the golden snitch into the arena, then take photos with characters from the books. Plus, the first 1,000 fans in attendance will receive a Roadrunners scarf. The $100 Harry Potter Pack includes four tickets, $20 in concessions, and exclusive access to a pregame meet & greet with animals from the Arizona-Sonora Desert Museum. 7 p.m. on Friday, Jan. 31 and Saturday, Feb. 1. Tucson Arena, 260 S. Church Ave. Regular tickets are $12 to $61+.

Ballet Tucson Winter Concert (Made in America). There’s something uniquely impressive about the unparalleled strength and beauty of ballet dancers. Treat yourself to a night of watching fantastically talented people make it all look easy at this concert, presented in collaboration with the Tucson Desert Song Festival. Serenade, the first ballet George Balanchine (aka the father of American ballet) created in the U.S., starts the night off. Then, the premiere of Chieko Imada’s Unsquare, which fuses classical ballet with jazz dance to capture the spirit of American musical innovation. Last, the premiere of Mark Schneider’s Recollections, presented in turn of the century period costumes.7:30 p.m. Friday, Jan. 31, and Saturday, Feb. 1. 1 p.m. Saturday, Feb. 1 and Sunday, Feb. 2. Pima Community College (West Campus) Center for the Arts Proscenium Theatre, 2202 W. Anklam Road. $45 GA, $40 seniors/students/military.

DeGrazia’s Circus. Perhaps one of the reasons Ted DeGrazia’s work is so colorful and fascinating is that he led such a colorful and fascinating life. For instance, from the ages of 11 to 15, he lived in Southern Italy, where the Italian circus left a strong impression of him. This new exhibit features a selection of paintings of circus horses and clowns he produced more than 20 years later from memory. Come enjoy the art and relive your own childhood memories of the circus at this exhibit! Opening reception is 5 to 7 p.m. Friday, Jan. 31, but the exhibit is on display through Sept. 2 at the DeGrazia Gallery in the Sun, 6300 N. Swan. Hours are 10 a.m. to 4 p.m. daily. $8 adults, $5 ages 12 to 18 and free for kids under 12.

Latin Dance Social. Sometimes it’s hard to think of putting “exercise” and “fun” in the same sentence, unless you’re saying something like, “Exercise is not very fun.” But this evening full of salsa, bachata, merengue, kizomba and timba dancing is a great way to get active, meet some new people and even challenge your brain in new ways (is it “left right left” or “right left right”?) This night starts with two Cuban salsa classes (one beginning and one intermediate), followed by a social where you can put your new moves to the test. 8:50 p.m. to 1 am. Friday, Jan. 31. Tucson Creative Dance Center, 3131 N. Cherry Ave. $10 for class and social, or $7 for just the social.

Unscrewed Theater’s Anniversary. This local nonprofit community theater, run 100% by volunteers, has kept its doors open for six years! If that’s not worth celebrating, what is? Come on down to join the rejoicing at this two-day event. At 7:30 p.m. on Friday, Jan. 31, enjoy family-friendly improv comedy, with special guest Ken Carr ($8 adults, $5 kids). At 7:30 p.m. on Saturday, Feb. 1, enjoy an even bigger celebration show, with giveaways, prizes, special guest David Fitzsimmons, and so much more! Tickets for the big party are just 20 bucks. And you know everything is going to a great cause!

Happy Hour Hobble. You don’t have to be a member of the Southern Arizona Roadrunners to attend this event, but attending just might make you want to join. Join a group for a free social run/walk of 1 to 3 miles around the UA campus, then head to Gentle Ben’s for food, drinks and fun afterward. You might even win some Happy Hour Hobble swag. Exercising and then grabbing a couple of beers make for a wonderful, balanced way to start the weekend. 5:45 p.m. Friday, Jan. 31. Gentle Ben’s, 865 E. University Blvd. Free.

Midsommar. Although we’re technically in the middle of winter, Ari Aster’s latest horror flick is powerful enough to reach you at any time of year. Midsommar, while steeped in tradition, mythology and classic horror tropes, is very forward thinking in that it almost entirely takes place in broad daylight. In this 2019 blend of psychological and folk elements, a group of Americans travel to Scandinavia, and wind up getting a bit more of the culture than they were expecting. This screening at the University of Arizona is presented by Cats After Dark. 8 to 10:30 p.m. Friday, Jan. 31. At Gallagher Theatre, 1303 E. University Blvd. Free w/ CatCard.

Les Misérables (2019). The feature film debut from Ladj Ly isn’t so much a spiritual successor of Victor Hugo’s classic work as it is a spiritual reenvisioning. This 2019 film follows three plainclothes cops as they navigate Montfermeil, the same Parisian district Hugo set his classic novel in. The film examines the ethnic and racial tensions between law enforcement and the area’s growing population of Muslim transplants. A kind of “hood film,” Les Misérables won the 2019 Cannes Film Festival Jury Prize. This screening at the Loft Cinema will be in French with English subtitles. Screenings begin Friday, Jan. 31. 3233 E. Speedway Blvd. $10.

Law Enforcement Appreciation Day at the Pima Air and Space Museum. So, obviously, admission for active and retired law enforcement with ID is free to the museum today. But they’re doing more than that, too. They’ll have emergency vehicles on display and services from local law enforcement agencies alongside their usual collection of hundreds of historic aircraft. Come around lunchtime to see the sheriff’s helicopter land! 9 a.m. to 4 p.m. Saturday, Feb. 1. Pima Air and Space Museum, 6000 E. Valencia Road. $16.50 GA, $13.25 Pima County resident, $13.75 active military & seniors, $10 for kids ages 5 to 12 and free for kids 4 and under.

Wood & Wire with Ryanhood. Grammy-nominated Americana musicians Wood & Wire are coming to town this weekend, and you won’t want to miss their mix of country songwriting, bluegrass virtuosity and sheer joy. Though this is their first show in Tucson, their banjo player Trevor Smith grew up here in the Old Pueblo! Opening is Ryanhood, the acoustic duo that headlined the 2017 Tucson Folk Festival and was named best group/duo in the 2014 International Acoustic Music Awards. Proceeds benefit the next Tucson Folk Festival! Doors 6:30 p.m. and show at 7:30, Saturday, Feb. 1. El Casino Ballroom, 437 E. 26th St. $15 in advance or $20 at the door.

La Bohème. Get ready to get emotional! Opera is just one of those art forms full of highs and lows—both musically and thematically—that can have you laughing, crying, marveling, and doing all three at the same time. This show, one of the most popular operas in the world, tells the story of a group of bohemians living in Paris in the 1830s, centering around the timeless, tragic love story of Mimi and Rodolfo. La Bohème is based on a book, but its depictions of poverty were also autobiographical for Italian composer Giacomo Puccini, who once said, “I lived that Bohème, when there wasn’t yet any thought stirring in my brain of seeking the theme of an opera.” 7:30 p.m. Saturday, Feb. 1. 2 p.m. Sunday, Feb. 2. Tucson Music Hall, 260 S. Church Ave. $25 to $120.

Carnival of the Animals. This month’s installment of the Oro Valley kids’ concert series is nothing short of whimsical. Musicians will be playing selections from Saint-Saens’ Carnival of the Animals, painting a musical picture of a parade of elephants, swans, donkeys and fish that will have your child’s imagination running at full speed ahead. They’ll also be led through movements to match the story. There’s nothing like those childhood days of running around pretending to be a circus animal, so we say lean into it with your kids. 10 a.m. Saturday, Feb. 1. Oro Valley Council Chambers, 11000 N. La Cañada Drive. Free. 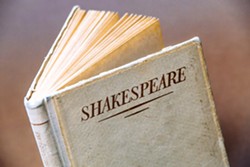 James Woodruss: Songs and Sonnets of Shakespeare. After leaving the music project The Wanda Junes, Tucson musician James Woodruss (aka Adam Frumhoff) spent two years gathering up some of his favorite passages and sonnets by William Shakespeare. Then he got to work setting them to music, and writing instrumental works based on Shakespearean characters and stories. The result is a collection of songs that feel almost familiar, in the vein of narrative country music, while at the same time feeling epic and ancient. This is the first time he’s performing the material. 8 to 10 p.m. Saturday, Feb. 1. El Crisol Tucson, 403 N. Sixth Ave.

First Saturday at the Potter’s Yard. Have you ever been over to HF Coors, a local pottery store and factory where they make gorgeous, durable and lead-free dishware? Whether you’ve never heard of ’em or you’re a regular customer, you’ll want to head over this Saturday for a chance to save 75 percent to 90 percent on seconds, overruns and discontinued items. You can also take a free tour of the factory at either 10 or 11 a.m. and enjoy free coffee and scones from Prep and Pastry. It’s about time you treated your kitchen to some new dishware, right? 8:30 a.m. to 5 p.m. Saturday, Feb. 1. HF Coors, 1600 S. Cherrybell avenue.