Arts and Culture Comics Do This! Fun in General The Weekly List 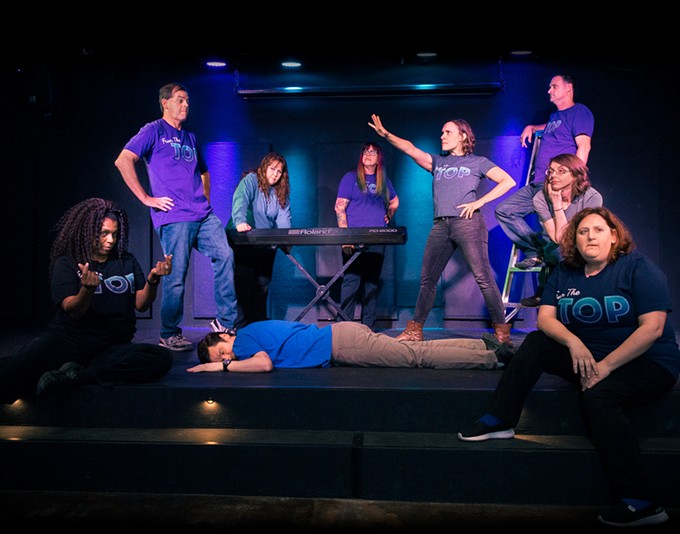 Dane Velasquez
Unscrewed Theater uncorks the funny with David Fitzsimmons, prizes and other special guests at a benefit celebrating their sixth anniversary on Speedway Blvd., Saturday, Feb. 1.
Did you just get here?

We have a big comedy crawl going on this week. It’s like a pub crawl, but with jokes. Among the 15 shows remaining between now and 11 p.m., Saturday, Feb. 1, there’s something you can laugh at with your gem show friends. Visit tucsoncomedy.com/crawl for a complete schedule.
Most of the Crawl venues have pub food. The others have food next door or nearby. All have beer; some have wine or cocktails, too. Only Unscrewed Theater, an improv venue, is dry, but they have lots more snacks.

Tucson comedians look forward to making you laugh, mostly for free or under $10. Following are a few best bets.

Keep Tucson Sketchy is a year-old ensemble that creates parodies of Saturday Night Live in full stage shows at the 103-seat Screening Room on Congress. KTS closes out the Tucson Comedy Crawl with two performances of Keep Tucson Sketchy: Best of Season One at 6 and 9 p.m., Saturday, Feb. 1.

Each show is a big production, including a writing team, videographers, sound designers, stagehands and lots of tech. Lots. There’s also a news cast and a musical guest.
All KTS sketches are original. About half are filmed on location around town. Live sketches take advantage of the theater’s full-sized screen to project the scene’s sets. Sketches included in Keep Tucson Sketchy: The Best of Season One, comprise crowd favorites from the show’s inaugural year.

The theater sells beer, wine, popcorn and a few snacks. Theater guests may also bring in food from Empire Pizza, next door. Empire swept the Best Place to Pick Up A Slice category in Tucson Weekly’s 2019 Best Of Tucson poll.

KTS routinely sells out at $10 in advance; $15 at the door. We recommend reservations via keep-tucson-sketchy.ticketleap.com.

Tucson’s art scene is lots cooler than you might think for a town this size and this remote. The arts community is as close as it is creative in its punk-like hacking of genres and ways to make a market. The amped-up restoration of the mid-century-modern classic motel, Hotel McCoy is the scene’s fever dream. Every kind of art finds a home there, including performing arts, including comedy.

McCoy’s free Last Friday, Last laughs, just over a year old, was an instant institution. Arrive for the 8 p.m. start on Jan. 31, and you might not get in. Pinche’s food truck, though, is inspiration enough to be there by 6:30 and have pre-show dinner, poolside.

This month’s Last Laugh is a novelty in town: a 100% clean show featuring some of Tucson’s top comics.

Unscrewed Theater’s popular Not Burnt Out, Just Unscrewed short-form improv show started years before, but the theater itself has been located somewhere along Speedway Blvd. for six years as of Feb. 1.

The nonprofit venue celebrates the date with a fundraising extravaganza featuring globally syndicated Tucson cartoonist and satirist David Fitzsimmons and all of its house teams: From the Top, which improves an entire Broadway musical in every performance; Comic Chaos, which improvises original comic book heroes and their epic stories; the character-driven Leaky Faucets and Big Daddies, best described as well-meaning dads gone weird.

Admission is $20 at the door or online at unscrewedtheater.org.

The UArizona chapter of the American Fisheries and Wildlife Society presents a comedy show benefit for its cause at 8 p.m., Friday, Feb. 7, sponsored by The Screening Room. It’s not a moment too soon. Have you been following the news about the shocking decline in numbers and species of fish and wildlife due to global warming? It’s enough to make us cry. All the time.

At least we can laugh at the benefit. The show starts at 8 p.m. and admission is $5. Headlined by Matt Ziemak, fresh from the Tower City Comedy Festival, the show also features touring comedian Joe Tullar and popular locals Nicole Riesgo and Jack Fletcher, among others.

Tucson Improv Movement debuts weekly Thursday shows starting Feb. 6. A long-form show at 7:30 is $5 and is followed by a free open jam at 8:30.