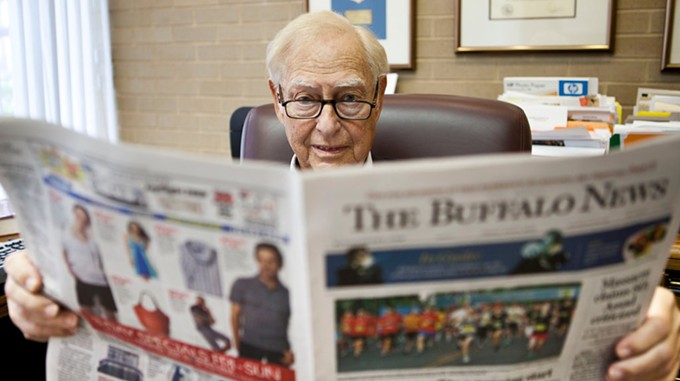 Photo by Brenden Bannon for the New York Times
Buffett scans the classifieds after selling media empire to Lee Enterprises for $140 million.

Billionaire Warren Buffett is selling his 31-newspaper and digital media empire for a tidy sum of $140 million dollars to Lee Enterprises, the parent company of the Arizona Daily Star.


Lee Enterprises, the current manager of BH Media Group, was the only company considered due to handling the media group’s operations since 2018, according to Buffett in a statement.


“We believe that Lee is best positioned to manage through the industry’s challenges,” Buffett said in the statement.

Buffett, 89, previously described himself as a newspaper “addict” dedicated to purchasing more news outlets in a 2012 letter to BH Media Group’s publishers and editors. However, the billionaire seemingly soured on the profitability of the fourth estate, stating newspapers were “toast” in a 2019 Yahoo Finance interview. Buffett cites the decline in newspaper ad revenue for his lack of hope in the media industry during the same interview.


While Berkshire Hathaway will no longer be in the newspaper business, Buffett and co. will be lending Lee Enterprises $576 million at an annual interest rate of 9 percent to help finance the sell and consolidate their existing $400 million debt.

Buffett acquired his first newspaper, Buffalo News, in 1977 and begin purchasing other news organizations as they became available, especially after the economic downturn of 2009.

Lee Enterprises is currently in a 50-50 partnership with media giant Gannett in the Arizona Daily Star. Gannett announced potential lay-offs and employee buyouts at the paper after merging with Gatehouse, another national media company, in 2019.