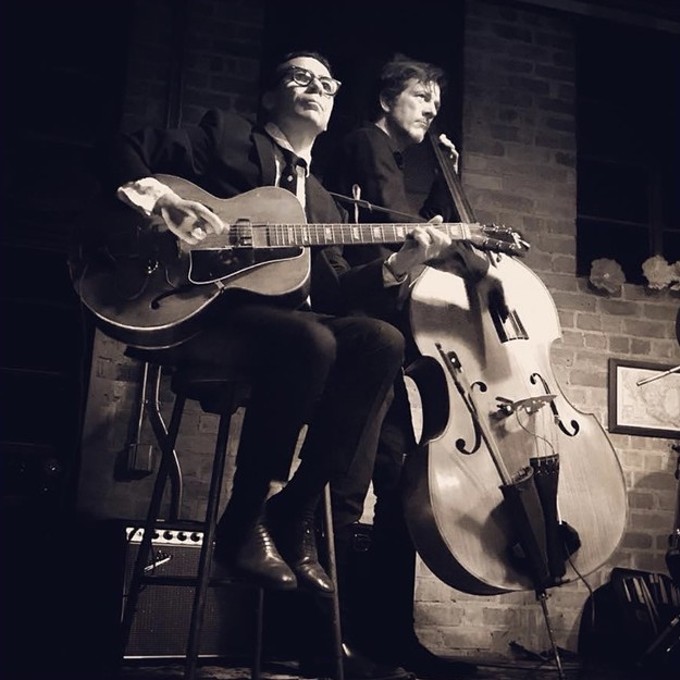 Naim's A Jazz Trio
“No Justice, No Peace, No Hope.” Piecing together an album reflective of the present, Good Luck Everybody (2020) is “pessimistic and sad, with small pockets of love and grace.” Despite an aversion to writing political songs, songwriter Sean Bonnette expands on the underlying theme, “Basic human connection is the path to our collective return to sanity.” Phoenician indie/folk punks AJJ—skirted by the irrepressible Tacocat and The Exbats—usher in the “New World.” At 191 Toole…

From the City of Angels—spinning a ridiculously fun blend of danceable indie rock interspersed with live elements and special guest performers—Electric Feels is an experiential party with a festival feel. At the Rialto Theatre…

Windows into Song is a program of sacred music by Rossini, Respighi and the world premiere of Vokas Animo by Tucson composer Robert Lopez-Hanshaw. It points the spotlight on soprano Federica Lombardi, who made her Metropolitan Opera debut in January 2019. She joins conductor José Luis Gomez and the Tucson Symphony Orchestra and Chorus. At Tucson Music Hall…

A “night of rock under the stars” awaits. Country-western/psych rockers, Jim McGuinn & The Cosmic Cowboys and Pocket Sand—as popularized by King of The Hills’ Dale Gribble—fend off any would-be assaulters. With Abes Bones. At SkyBar…

Musical shapeshifter Jacob Acosta’s music ranges from the bucolic to the blue-collared. Hear the sounds of the expansive desert. At Harbottle Brewing Company…

The Dead of Winter Fest is an annual heavy metal festival with showcases in Tucson, Kingman, Flagstaff and Phoenix that benefits local youth music programs. This year’s lineup: Cutthroat Gorgeous, Scattered Guts, Adavant, Deadspawn, Shadows of Algol, Pain Patterns and Despair. A portion of the proceeds to benefit Keep Children Rockin’. At The Rock…

With a focus on classics, Naim’s A Jazz Trio is at El Crisol. Makes a perfect pairing for date night…

Tom Walbank
With a keen eye for detail—from spot-on renditions handpicked from the Beatles extensive catalog to a stage show with costume changes reflecting every era of their career—The Fab Four tip a velvet hat. At the Fox Theatre…

No two shows could ever be the same. Landing somewhere between David Lynch, Ennio Moriccone and Earth, the high desert-noir of The GRAL Brothers perform alongside absurdist, lo-fi folk/pop/rock deconstructionists Golden Boots. At El Crisol…

From Bozeman, Montana, vocal centric electro/soul duo Dash promise to have you “out on the dance floor, rocking out to the unknown.” At Sky Bar. Locals Juju Fontaine and Moontrax add sass to the lineup…

From the island province of Newfoundland, Canada, lo-fi singer-songwriter Aaron Powell aka Fog Lake creates music that’s been described as “a complex collage of nebulous angst and heartfelt nostalgia.” At Club Congress. With NYC’s Foxes in Fiction and Video James…

“Soul, blues and funky fun.” It’s a dance party with Little House of Funk. It’s like “WD-40 for the hips, Baby!” In the clubhouse at El Rio Golf Course…

In honor of this 4th Avenue venues’ 1st Anniversary, Hank “Cry ‘em All” Topless performs a solo set of his not so “Happy Time Blues.” At The Boxyard…

This English blues harpist/guitarist plays guitar like a drum. “I play the harmonica like a drum as well, very rhythmically. If I get too far from the rhythm, I know I am doing something wrong.” Tom Walbank stays on point. In the courtyard at Mercado San Agustin…

Hank Topless
It started informally, “...just getting together and doing some picking,” says vocalist Todd  Sheaffer. Shortly thereafter, on the strength of their five song demo they landed a spot at the prestigious Telluride Bluegrass Festival before even playing their first gig. But, what kind of music is this? Afterall, they use amplifiers and drums; Instrumentation considered anathema by many in the bluegrass world. “Souped-up string band,” Railroad Earth perform at the Rialto Theatre. The familiar yet innovative sounds of Marty O’Reilly & The Old Soul Orchestra stir up the dust first…

Beware of the Green Fairy’s bite. Songs of heartbreak, romance and light are on the menu when For Love or Absinthe perform at the Royal Sun Lounge…

Leading the funeral dirge, Sworn Apart, No Paradise, Flying Half Full and Rich Young pay respect to the music of Type O Negative and Carnivore. At The Rock…

With its origins deeply rooted in the Gypsy culture of Spain, this traditional art form presents the interactions between song, dance and guitar, executed atop a percussive wooden platform. Tablao Flamenco perform at El Crisol…

PD Ronstadt & The Co. tag team with Sweet Ghosts in a mellifluous lucha libre of sorts. At Monterey Court…

Smash the winter chill with the psycho/post-country sounds of Hank Topless & The Dead Horsemen. On the patio at Che’s Lounge…

Tipping a hat to the music of Jerry Garcia, Legion of Mario presides over Sunday church. At The Hut…

No matter what size, Tiny House of Funk will make you “Shake, shake, shake...Shake yo’ booty.” At Public Brewhouse…

Claytoon of the Day: Smearing 1999