As depicted in many of the world's religions, a tree represents the link between the underworld, the Earth and the heavens. Led by acclaimed artist Daniel Martin Diaz, this Tucson experimental rock band’s architecture is a sentient ecology of the cosmos.

Using sound, signals and vibes. They speak constantly, even if quietly, communicating above and below ground, connecting with everything that exists, and just possibly you. Scientists increasingly argue that humans can learn to hear this ancient form of communication.

Although "tree" is used in common parlance, there is no universally recognized definition of what a tree is botanically. Much like the band. By incorporating elements of avant-garde, minimalism, neo-psychedelic and electronica—”along with violin-bowed guitar, theremin and a glut of effects pedals”—Trees Speak transcend the mainstream: Their branches extending towards the sky.

And, similar to photosynthesis, Trees Speak capture energy and convert it into something else. 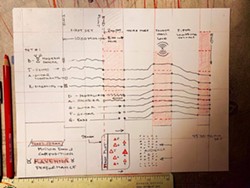 “Our intention is to create music with an unrehearsed minimalist approach performing simple beats, riffs, and sequences that take one inward. We let the musical performance sculpt its own destiny and create imperfect perfection. Our tool of creation is the anxiety one feels when they are unrehearsed or prepared for a performance. We believe this approach brings us closer to the authentic self. The result is genuine music without an agenda that captures the unfiltered spirit.”

In keeping with the lofty dialectic of kosmische musik (cosmic music, in German), a genre of electronic music which originated in West Germany in the 1960s—where titanic and barbarous forces struggle mysteriously with an underlying unity—Trees Speak seek to patch their hearts onto your soul.

Avant-experimentalists Trees Speak—joined on stage by Birds and Arrows with vocoder and guitar treatments—fête the release of Ohms with a visually provocative live show. On Friday, Jan. 24. At the historic Club Congress. Performances by Ryan Alfred (on modular synthesizer) and modern dancer Ravenna add appreciably to the event.

For the uninitiated, here is a taste.