Amir H. Fallah: Scatter My Ashes on Foreign Lands. Amir H. Fallah, originally from Iran, received his MFA in painting at UCLA back in 2005 and has gone on to become one of America's most prolific contemporary artists. This exhibit marks the first time that he showcases a wide array of thematic projects under one roof. From botanical paintings inspired by 17th-century Dutch pieces to portraits of American immigrants that examine how displacement shapes identity, it's a powerful body of work. This exhibit also features a new series of autobiographical pieces centered around themes of fatherhood, belonging, legacy and family. On display through May 3 at the Tucson Museum of Contemporary Art, 265 S. Church Ave. Hours are noon to 5 p.m. Wednesday through Sunday. $5 GA, $3 students & seniors, free for members, youth under 17, veterans, active military and public safety officers.

Color Out of Space. The Loft Cinema is hosting an advanced screening of this new adaptation of H.P. Lovecraft's work. This sci-fi horror follows the madness that ensues after a meteorite lands on a rural farm, unleashing mind-infecting monsters on the quiet land. It's got all the classic Lovecraftian spooks: cosmic entities, surreal horror and the maddening macabre. Directed by cult filmmaker Richard Stanley, starring Nic Cage, Joely Richardson, Madeleine Arthur and Brendan Meyer, as well as Tommy Chong. This advance screening even features exclusive bonus content. 7 p.m. Wednesday, Jan. 22. 3233 E. Speedway Blvd. $10.

"I had to learn that the helping hand can be the same one that holds the knife/And no, I'm not well but I'm alright." On "Hard of Hearing" indie folkster Ben Cooper, aka Radical Face, depicts the frustration of struggling to cope with the toxic positivity created by a society at large too quick to stigmatize depression. Of needing but never receiving the validation that comes from someone actually listening and saying, "It's OK to feel that way." At 191 Toole. Originally from the remote fishing village of Húsavík, Iceland, indie folk singer-songwriter Axel Flóvent opens...

Celebrating over 73 years at the forefront of music-making in the UK, The Royal Philharmonic Orchestra perform at Centennial Hall...

Eric Johnson
Possessing Herculean chops and an ear for melodicism, Guitar Player has hailed this Texas hurricane as "One of the most respected guitarists on the planet." Eric Johnson plays the classics, past and present, at the Rialto Theatre...


"Coursing Through," Houston alt-rock/shoegazers Narrow Head "Make It Hurt" when they return to Club Congress. With support from Lychee, Hikikomori and Evergreen...

Claytoon of the Day: Midnight Mitch 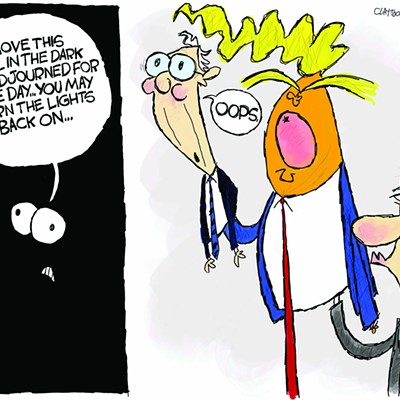 Tucson on Forbes '10 Cities Best Positioned To Recover From Coronavirus'