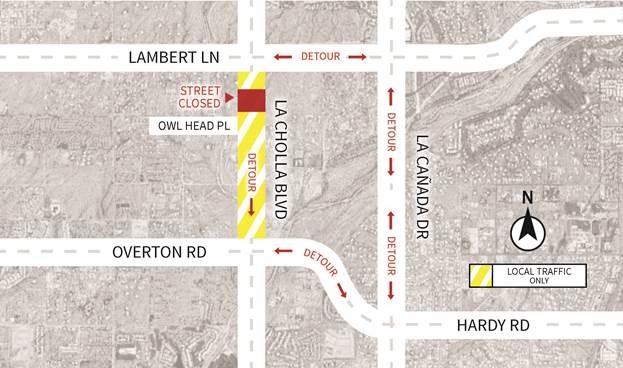 Courtesy Town of Oro Valley
Beginning at 5 a.m. on Monday, Jan. 27, North La Cholla Boulevard will be completely closed  between West Lambert Lane and West Overton Road in order to allow construction crews and heavy equipment to operate safely as they work on widening the road to four lanes.

Local access to homes and businesses on La Cholla will be maintained throughout the closure, according to an Oro Valley press release. North La Cañada Drive has been designated as the detour route.

“We understand this affects commuters who use La Cholla Boulevard, but the primary reason for this closure is safety in a specific area of the project,” said Public Works Director and Town Engineer Paul Keesler, in the release. “The space needed to accommodate the contractor’s personnel and heavy equipment near a retaining wall constructed for the project leaves limited space for the traveling public. With a complete closure we can maintain the safety of the public and the contractor. And the upside is that it helps us finish the project almost a month and a half early.”

The La Cholla widening project is on schedule and town staff expect this temporary closure to accelerate the completion date to mid-August, instead of late September.

Keesler said the town previously considered using flaggers to direct traffic around the construction through one-way lanes, but that would extend the project timeline by two more months, which drives up the cost.

He said the town has learned from the previous La Cañada and Moore roundabout construction that “it is more efficient, and safer, to just close the work area and get the job done.”

The Town of Oro Valley produced an informational video to explain the closure, available at https://www.youtube.com/watch?v=mwQ6XxT59gU&feature=youtu.be.