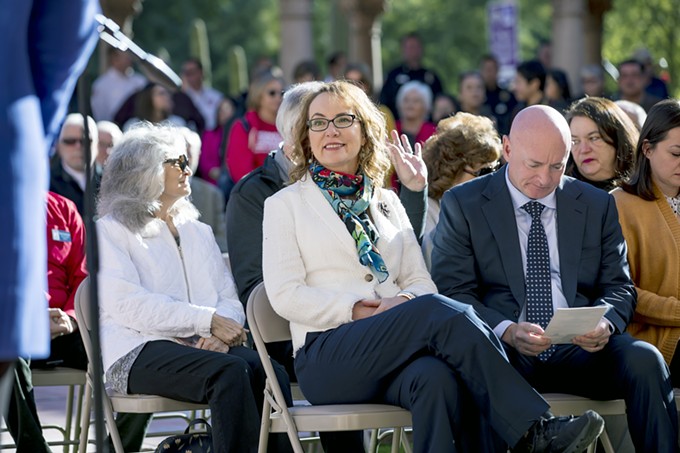 Dozens gathered on the Pima County Courthouse lawn in remembrance of the six people who were killed and 13 others wounded during the Tucson shooting at then-Congresswoman Gabrielle Giffords' Congress on Your Corner event nine years ago Wednesday morning.

At 10:10 a.m., to coincide with the time the shooting started, a silver bell rang as each of the names of those who died or were wounded on January 8 were read aloud.

Moments before the ceremony took place, Ron Barber, a victim of the shooting and former Arizona congressman, spoke about the new permanent memorial currently being constructed at the west end of the courthouse which should be finished by fall.

“This memorial will not only honor the victims and survivors,” Barber said. “But also law enforcement personnel, the EMTs, the doctors and the citizens who came to our aid.”

The theme to the memorial is “embrace” and “resilience," according to Barber.

“Embrace is what we all felt and still feel from our community,” Barber said. “This memorial is also about resilience, which has been the hallmark of Tucson going back decades.”

The memorial will showcase the resilience of all who have lived in southern Arizona for centuries, from Native Americans, Mexicans, pioneers and all who have faced adversity, according to Barber.

Barber also stated the memorial is supposed to get a national designation, as legislation is being introduced into the House and Senate this week.

“Tucson is unlike any other city and it has proven that over and over again in the wake of Jan. 8,” Barber said.