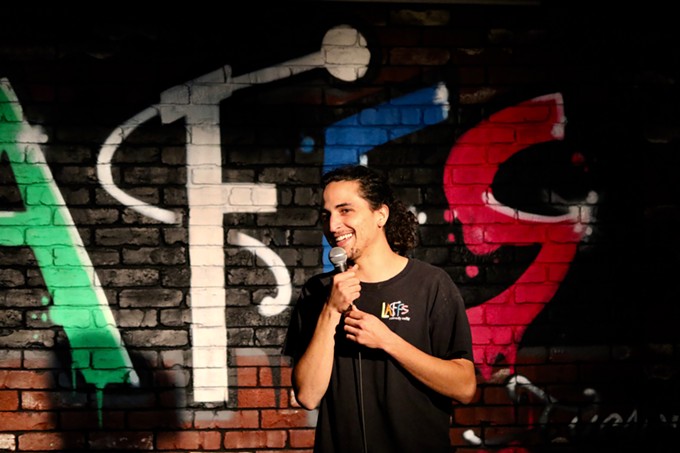 Clayton Braasch
Comedian Marcus Gallego started at Laff’s open mic when he was under age and had to stay in the Green Room when he wasn’t performing. Now he produces shows, goes to all the mics and does tech and guest sets at Laff’s.

Trivia and karaoke are so last decade

This is the year to take the crew to something new. Every night but Saturday there’s a fun bar with a comedy open mic. They are all listed at the bottom of this column every week.

Open mics are especially suited to packs of friends because everyone has opinions to share about new comedians or comedians working on new material. And all their opinions are right. Co-workers, D and D team members, night crawlers, loners, bandmates, extended family, trivia team or a rugby crew can see, or even be, the next big thing in local comedy.

At an open mic, comedians are friendly and accessible. Audience laughter is nowhere more precious. But without “civilians,” comics and wannabees are left to the biased support of Tucson’s big, and growing, comedy family.

It takes unimaginable nerve for people to put themselves out there for the first time, even for the first couple of years. Just a handful of friends may be all it takes for that one funny buddy to actually make it to the stage.

Laff’s Comedy Caffe is ground zero for comedy beginners. The three-minute sets at its 8 p.m., Thursday open mic (signups are at 7) have launched nearly every comedian and producer in town, and more than a few who have gone on to bigger reputations on streaming channels, podcasts, comic books and stages in New York, Los Angeles and Austin, TX.

Comics at the Laff’s mic tread 30 years of Tucson comedy history on that stage. In a 2016 interview, we asked owner Gary Bynum how he saw Laff’s role. “I think just developing the local comics is important in the comedy scene in general. You have to start locally. Forty comics come every Thursday to open mic nights.”

His sons Casey and Ian have mostly taken over the business and the mic still draws 40 comics a week, more than twice that of any other mic in town.

But stage time is the exchequer of local comedy, and the more you have the more you can get. Three minutes is daunting at first, but in a year or so, ten minutes is too little. Local comics continue to refine their jokes at Laff’s in hopes of getting a guest set there. But most also visit the indie mics that offer sets of at least five to seven minutes. Some have a combination of booked and open mics, offering more experienced comedians 10 minutes or more. Experienced local and visiting comedians working out material for paid gigs can sometimes arrange even longer times.

Hosts often rearrange a signup list to make the best show. Signups at Laff’s are at 7 p.m. for an 8 p.m. start. Other mics start taking signups from a half hour to 15 minutes ahead. It’s in a newbie’s interest to arrive early and meet the folks.

Tucson comics love newbies, before and after their sets, no matter how ugly and stupid they may feel. All comics feel ugly and stupid a lot of the time. At its best, every open mic is group therapy.

If you’d like to try comedy but are freaked out about looking foolish, there’s a class for you. Tucson Improv Movement’s (TIM) Standup 101, starting Jan. 5, teaches how to craft great jokes from daily life and/or personal pain. Instructor Mo Urban is an experienced comedian, producer and social worker—basically a unicorn of good humor, organization skills and professional-level empathy.

The class is $150 for 6 weeks and a “graduation” performance. Details are at tucsonimprov.com/school. It usually sells out, so keep an eye out for the next one.

If, instead, you crave turning your curling club or cat yoga group into an improv team, check out improv classes beginning this week at both TIM and Unscrewed Theater https://www.unscrewedtheater.org/training-center.

Comedy at The Rock

Good for The Rock, Tucson’s longtime underground music space, for taking in some comedy lately. We are especially looking forward to Steve Hofstetter on Tuesday, Jan. 28, during the Tucson Comedy Crawl, Jan. 25 through Feb. 1.

Things to Do, Thursday, Jan. 2

Claytoon of the Day: Pope Slap