Hanukkah Latkes at Ermanos. They’re back! Ermanos Craft Beer & Wine Bar is embracing the season by serving up some specialty latke plates with house apple sauce and sour cream for $9. And if you want to make them extra special, you can upgrade the dish with a flute of Prosecco for $15. Either way, these potato pancakes are sure to pair well with a craft beer or two. 5 to 10 p.m. Thursday, Dec. 26. 220 N. Fourth Ave. $9 to $15.

Arctic. Now that it’s actually winter, Casa Video is screening some of the chilliest movies they can. These include the new Icelandic survival/thriller Arctic, which premiered at the 2018 Cannes Film Festival. Filmed over 19 days in Iceland, it tells of a man stranded in the arctic, waiting for rescue after a plane crash. Not only does he struggle against the elements, but with his own solitude. Star of the film Mads Mikkelsen said the making the film involved the most difficult shoot of his career. 7 to 9 p.m. Thursday, Dec. 26. Free.

Wil Taylor: Pearls of Eden. Have you checked out the art at the Tucson Botanical Gardens lately? One of the displaying artists is Tucson-based Wil Taylor, who received his master’s degree in art education at the UA. He taught for 15 years before pursuing full-time studio work, and now you get to admire the results. His pieces heavily feature his love of nature, as well as themes that are resonant on both personal and universal levels. If you’re into design, visual patterns and the natural world, make sure you get in to see his work before his exhibit is over on Jan. 5. Hours are 8:30 a.m. to 4:30 p.m. Saturday through Wednesday and 8:30 a.m. to 8 p.m. Thursday and Friday (closed on New Year’s Day). Tucson Botanical Gardens, 2150 N. Alvernon Way. $15 GA, $13 students/seniors/military, $8 kids 4 to 17, free for members and kids under 4.

XOXO: Where to Rock Thursday, Dec. 26

Claytoon of the Day: Money For Corruption 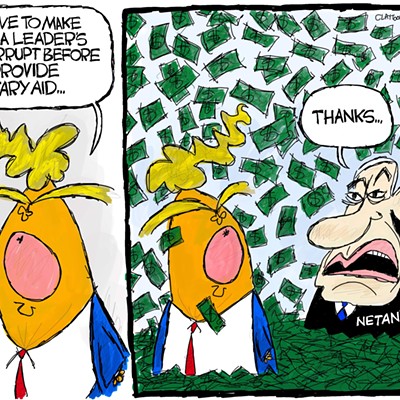