Arts and Culture Booze Do This! Fun in General Pets and Beasts 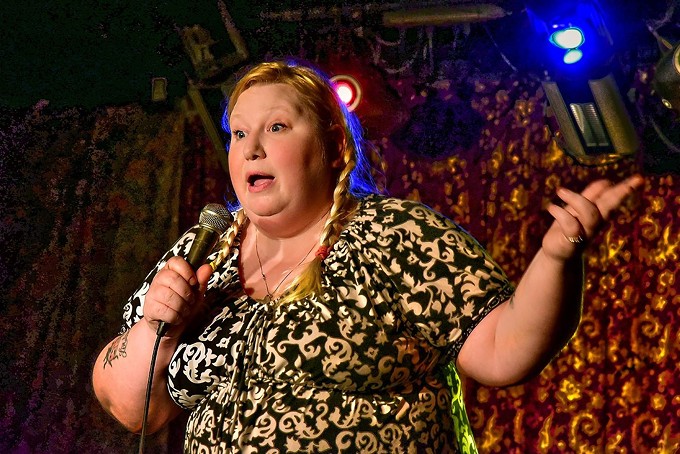 Almost any comedy club in the country would welcome the lineup for Brew Ha Ha’s fourth-anniversary show. Kristine Levine headlines a bill that includes Jamie Kilstein, who just co-headlined with Ian Harris at 191 Toole; perennially popular regional headliner Pauly Casillas; and Michael Longfellow, who headlines at The O on Tuesday, December 21.

After four years of getting better almost monthly, Tucson’s longest-running independent comedy show is also its best value. Incredibly, tickets are still just $5. The celebration is at 8 p.m., Friday, December 20 at Borderlands Brewery. Make reservations on squareup.com or pay at the door. Dogs are always welcome.

According to her biography at kristinelevine.com, “Kristine is best known for her role on the hit Netflix series Portlandia, and her starring role in the recently re-released film, 'The Unbookables'."
The Unbookables, produced by comedian Doug Stanhope, introduced the world to what’s been called The Doug Stanhope Family. Often recognized as one of America’s top comedians, Stanhope is cursed, or blessed, with a blazing intellect and unique cultural fluency in the midnight realms of human opportunity.

For The Unbookables, first released in 2012, Stanhope loaded an unreliable van with hand-picked acolytes and dispatched them on a tour of sleazy midwestern comedy clubs. The results, hilarious, provocative and defiant, were re-released last year on Amazon Prime Video.

In 2018 she released a popular recording of her explicit spoken word and comedy performance, “Hey Sailor,” on the Stand Up! Records label. It’s available via Amazon.com Music and other online outlets.

Since moving from her Portland home town, she has become a local standup icon and radio star in Tucson, co-hosting The Frank Show on 96.1 KLPX from 6 to 10 a.m., weekdays. The show can be heard streaming live at klpx.com.

Casillas is the only local in the lineup. He’s the devoted, hometown-bound dad of two very young daughters. The nationwide popularity of his Twitter account launched him into standup when his wife was pregnant with their first daughter. His stage range has since extended primarily to Phoenix, where he is as popular as he is here. He founded The Switch, a combination improv, and standup show, that still runs at The Hut, hosted by Matt Ziemak. Casillas now hosts it periodically in Phoenix’s trendy Crescent Ballroom.

We wrote about new Tucsonan-via-Los Angeles Jamie Kilstein last week when he co-headlined with Ian Harris at 191 Toole. It was a festival of nerdish comedy and the people who love it. Kilstein’s laugh lines come in a rush of bemusement about paradoxes the rest of us take for granted.

A late addition to the bill is Michael Longfellow, about whom you’ll find more, below. He also headlines at The O on Saturday, December 21.

Michael Longfellow at The O

At the age of 25, Michael Longfellow has a solid grounding for a successful comedy career. He's placed second in Atlanta’s storied Laughing Skull Comedy Festival. He also has performed on Conan and was tapped by Turner Broadcasting (TBS) as one of its Comics to Watch. Fans now can follow him on Hidden America with Jonah Ray and Bring The Funny on NBC.

It just shows how far good looks, ambition, talent and hard work can take some people. Longfellow started comedy and college at the same time in his home town of Phoenix. He performed regularly at the Tempe Improv and Stand Up Live. Importantly, he also helped run The Big Pine Comedy Festival in Flagstaff, where he met comedians and producers from all over the country.

Longfellow headlines at The O at 8 p.m., Saturday, December 21. Reservations are $7 via Eventbrite and $10 at the door. The club has a two-drink minimum. The O encourages audience members to enjoy its new, free after-show tradition of karaoke with the comedians.

Claytoon of the Day: Trump, Slow Your Roll

XOXO: Where to Rock This Thursday, Dec. 19