Arts and Culture Booze Community Info Do This! Fun in General LGBT Pets and Beasts Politics Sports The Weekly List

“I feel like, as opposed to LA, everyone in Arizona can actually defend me in a fight,” says comedian Jamie Kilstein. He likes it here. That’s a lucky thing because five months ago he moved here on a whim. “I have actually grown more (here) artistically than in my life in L.A. and New York,” he says.

Not that those great comedy cities treated him badly. He debuted on Conan. He’s been on MSNBC's Up with Chris Hayes, Countdown with Keith Olbermann, Showtime, The Joe Rogan Experience and BBC America. He launched two podcasts, and he earned a national reputation for smart, edgy political comedy, joking about arcana that actually matters. He’s lately joking about other facts of life, but all the high-speed punches arise from the same energy.

Kilstein and Harris became friends in Los Angeles. “We kind of clicked because we both have political material. Oddly enough, we also train and coach Mixed Martial Arts.

“I think people who fight oftentimes don’t have much of an ego because we get our ass kicked a lot,” he says. “So, the idea of splitting a bill was more exciting to us. I just want to make art with people I like.”

Ian Harris started both fighting and doing impressions at age 6, inspired by the movie, Rocky. “As a kid I’d watch all the boxing matches,” Harris says, “and I would do all the play by plays and the interviews after the fight for my parents. I would be Muhammed Ali being interviewed by Howard Cosell.”
He says his whole family were really funny, so it’s not surprising that he would find jokes everywhere, even in taboo subjects. “I can’t avoid it. Even on accident I talk about religion or politics. Those are the things that interest me. Bur I personally steer away from (drug humor). I don’t do a lot of alcohol or relationships.” Nor do either he or Kilstein do jokes about martial arts.

“I think a lot of my stuff comes from a very nerdy kind of scientific background,” Harris says. “Like ‘Look at these weird beliefs. Conspiracy theories, religion, and why do we believe in these things when the evidence so clearly is the other way.”

Applause for the Paws!

Sarah Kennedy headlines at The O to benefit the Humane Society of Southern Arizona at 8 p.m., Friday, Dec. 13. A 6:30 cocktail hour features an adoption event to make the day a lucky one for some shelter pets.

Kennedy started performing comedy in 2009 a few blocks from her Albuquerque home. After producing many shows, and sweeping her hometown papers’ Best Comedian awards, she left for the bright lights of NYC.

There, she appeared on the Today Show and MTV, wrote for The Advocate and Reductress and was a finalist in a national, NBC Stand-Up for Diversity competition.

Now back in Albuquerque she’s been a welcome guest on Tucson stages. Also performing are a hometown favorite drag queen, Miss Nature, and Autumn Horvat, creator and host of Comedians Who Aren’t Men. Eli Turner hosts. Tickets are $10 via support.hssaz.org/event/applause-for-paws/e255190.

The ensemble’s 100th show, and 8th-year anniversary, at 7 p.m., Saturday, Dec. 14, welcomes back six popular “celebrity guests” from shows gone by to play an anniversary round of The Mismatch Game. The towering and authoritative host Chatty Kathee presides with her sassy executive assistant Swish Marley.

To celebrate, the show is free with a donation to Toys for Tots. Seating is first come, first served, and there will be no splash zone.

The Pirates Who (almost) Stole Christmas

Kids from the audience help improvise the storyline of Elves Gone Bad: A Pirate’s Christmas at 1 p.m., Fridays and Saturdays, through December 22. Reservations are $5 at unscrewedtheater.org/events/

The story is that Santa and the missus have retired to Tucson, leaving the North Pole elves unemployed. What with the melting Polar Ice Cap, apparently, an evil pirate captain sails to Santa’s workshop to recruit the elves as pirates. Pirates, of course, steal presents instead of giving them. Mayhem ensues, and only audience members can put things back right, somehow.

We think all the elves and reindeer should move to Tucson, form a union and put Jeff Bezos out of business. How about you? 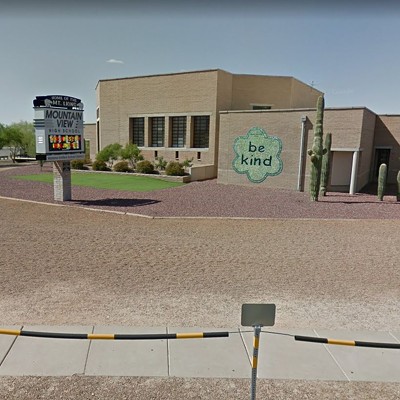