Arts and Culture Booze Do This! Feminism Fun in General 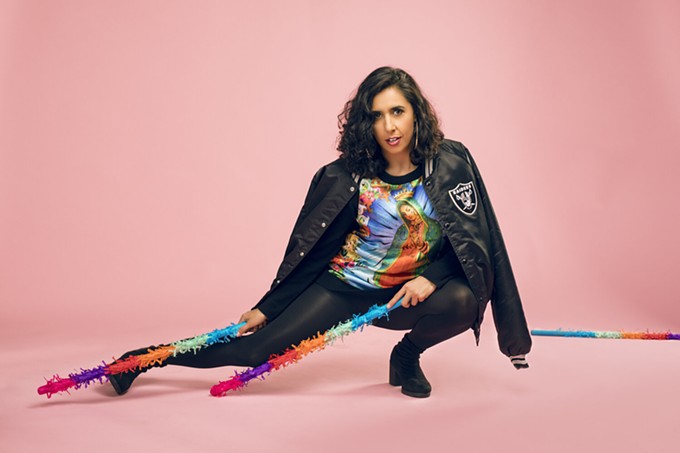 “Latinas make 54 cents to every white male dollar, which is why I have to take a roll of toilet paper from every business I enter for rest of my life.”

So tweeted Anna Valenzuela recently, making us spew our coffee while holding up a mirror to the privilege in our white feminism. We can expect a whole set of such darkly colorful insights, delivered with authentic warmth and much laughter, at 8 p.m., Saturday, December 7 at The O. Tickets are $5 via Eventbrite.

A legit black belt in karate, Valenzuela slayed the field with snaps on a recent Comedy Central Roast Battle. She appears regularly at the Comedy Store and The Improv and was a favorite at Second City’s Los Angeles Diversity in Comedy Festival. She also hosts two podcasts: 12 Questions, an in-depth look at sobriety, and Bruja-ja, where three Latinas dish on all things Latinx.

A Los Angelean, Valenzuela will be the first touring headliner featured in the cheekily titled comedy show series Cunts Being Cunts Taking About Cunts. Organizers Mo Urban and Steena Salido have lately shortened it to CBCTAC in print, presumably for convenience, because: Why else?

As at every CBCTAC show, feminine hygiene products will be collected for Project Period, a program of the YWCA of Southern Arizona. 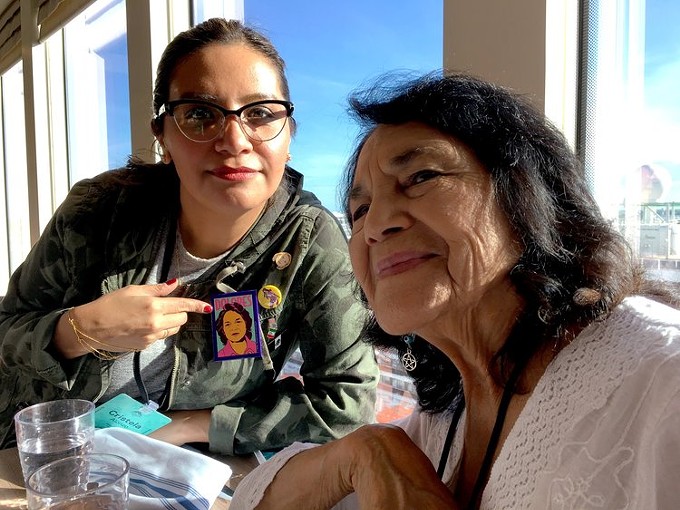 Cristela Alonza performs at 8 p.m., Saturday, December 7, at the Rialto Theatre. Tickets are $19 to $36 at rialtotheatre.com.

Alonzo is comedy’s answer to Dolores Huerta, her idol. Her website, cristelaalonzo.com, devotes as much space to her causes as to her comedy. She writes, “I am a first-generation American born to an undocumented mother that taught me to love this country. I believe it is my duty to give back and fight so that everyone can get the same thing my family got: a chance.”

And then she quotes Huerta. “Every moment is an organizing opportunity, every person a potential activist, every minute a chance to change the world.”

Alonzo created her own bully pulpit five years ago with Cristela, a network sitcom that she wrote, produced and starred in herself. Soon after, she began guest-hosting the daytime roundtable show, The View. In 2017, she became the first Latina lead in a Pixar film, voicing the part of Cruz Ramirez in Cars 3. Lower Classy, her first standup special, is streaming on Netflix.

Last month a Simon & Shuster imprint published her book, Music to My Years: A Mixtape Memoir of Growing Up and Standing Up. The stories reveal her vulnerability and her challenges, like the tap shoes she made for herself with bottle caps, and how standup comedy helped her process her grief when her mother died.

From the struggles she sees in others and in her own life, Alonzo crafts comedy that welcomes us into her world with the light of her humanity.

Mishka Shubaly at The Wench

Comedy at the Wench breaks its open-mic format at 7 p.m. Monday, December 9, to bring us comedian and pan-genius Mishka Shubaly.

Best known as a writer and musician, Shubaly has the wits and the wit to have turned a self-made disaster of a life into a livelihood. His childhood broke his heart, youth was a struggle and he was an alcoholic by the time he graduated college at 15. Yet at 22, he received the Dean’s Fellowship from the Master’s Writing Program at Columbia.

A dissolute life ensued, yielding six record albums, one with Brooklyn’s goth, post-punk band, Freshkills. Shubaly’s six Kindle Singles all have been best sellers. In 2016, Public Affairs published his memoir, I Swear I’ll Make It Up To You: A Life on the Low Road. He also teaches writing at the Yale Writers Conference. Luckily, he got sober at 32, inspired by marathon running.

The Wench show also features Jake Flores. Not to be reductive but we’re running out of space. Flores’ website URL says it all: feraljokes.com Reservations are $5, or $10 for preferred seating in the show room. These special shows at The Surly Wench have been selling out, so we recommend reservations via donate@wenchcomedy.com on PayPal or @wenchcomedy on Venmo.

David Fitzsimmons is having a busy weekend. Last week we wrote about his project for fellow old folks, Still Standing up. Featuring five comedians over 60, the show makes fun of things only old people know about. Take that, millennial smarty-pantses.

To recap, Still Standing Up is at 6 p.m., Sunday, December 8, at Laffs Comedy Caffe. Reservations are $10 via Eventbrite.com.

On December 7, though, at 1 p.m., Fitzsimmons hosts another epic production of his annual Arroyo Café Holiday Radio Show at the Rialto Theatre. More than 20 local celebrities perform a loosely scripted radio play around musical guests and other entertainments and surprises, Including Wilbur Wildcat.

XOXO: Where to Rock, Thursday, Dec. 5

Claytoon of the Day: Tickle Me NATO