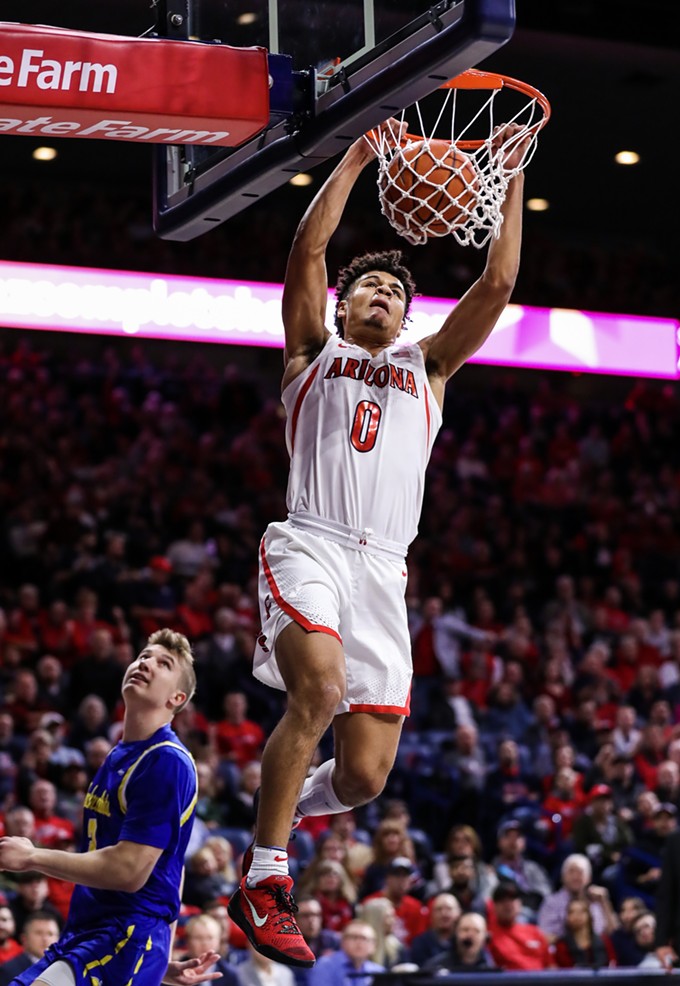 The Wildcats (5-0), trailed for much of Thursday's contest, before scoring seven unanswered points midway through the second half to take control of the game.

The team's victory didn't satiate 11th year coach Sean Miller's quest for success, however, as the veteran coach lambasted his team for its poor play in his postgame comments.

"First things first, I want to give South Dakota State a lot of credit. Those kids and their coach had a really good game plan, they executed, they’re a well-disciplined team. We knew that before we played them," Miller said. "They’re used to winning and you can sense and feel that, and they have a very solid point guard. And (Douglas) Wilson we knew coming into the game was an outstanding player.

"And they’re disciplined on both sides of the ball. They played against the team tonight that wasn’t very smart, and that’s our team."

Miller's postgame soliloquy rambled on for another three or so minutes before moving on to other topics, but told the tale of a coach not satisfied with a single-digit victory against a team from the Summit Conference.

“Everybody gets kicks out of quick shots and it’s fun, it’s like we’re at a carnival. It doesn’t work that way. It doesn’t work," Miller continued. "The analogy is no different in college football. When the weather gets cold, you gotta be able to both run and pass. You gotta be smart. You know, that sounds good, but usually when the game gets going fast, that means that you’re flying around on defense, you’re getting defensive stops, you’re making good plays.

"And of course we have talent in the open court and that’s when the quick shots are going to go up and they’re going to be good shots. But to take quick, crazy shots, 3-point shots the way we did tonight, we’re very fortunate to win."

The Wildcats' path to victory against a zealous Jackrabbits squad began in earnest when freshman guard Josh Green hit a midrange jumper to give the home side a 40-39 lead with 11:51 left in the game.

Green, who finished the night with a team-high 15 points on 4-of-13 shooting, was one of three Wildcats to finish in double figures, along with Nico Mannion (14) and Zeke Nnaji (14).

Miller spotlighted the former in his postgame remarks, citing the lack of shots that Nnaji, who has entered the contest having hit 17 consecutive field goals, took.

The freshman forward finished the night with four made field goals on five attempts, with six rebounds in 21 minutes of game action.

Miller said the Wildcats need to do a better job of getting the ball inside the paint to Nnaji, instead of hoisting ill-time three-pointers, after Arizona shot 3-of-17 from beyond the arc.

“We have a player on our team who leads the nation. If you lead the nation in anything, you are outstanding. Zeke Nnaji has proven that when he gets the ball, especially around the rim, great things happen," Miller said. "We play 20 minutes, and he was in foul trouble, but it really started in the second half of the last game.

The Wildcats will look to improve upon those facets come Sunday's 6:30 p.m. game, when they host Long Beach State.

The two teams have met seven times, dating back to 1987, with the Wildcats winning each of those contests by double digits.

Sunday's contest will be carried on television by the Pac-12 Network. Tickets for the contest can be found on the University of Arizona's website.

Claytoon of the Day: What's Your Crazy?

Festival of the Arts returns to Oro Valley next month