With a voice that ranges from softly melodic to impassioned caterwauling, at the peppy age of 14, this songwriter/author founded art-punk band Throwing Muses with her step-sister Tanya Donelly back in 1981. In continuum, as a solo artist her prolific output is an assemblage of jagged emotional edges tempered by plain-spoken folk. "The songs keep on writing themselves, and I really love them. It's as close as I get to a religion." In a special solo acoustic performance, Kristin Hersh is at 191 Toole. Singer-songwriter Fred Abong—former bassist for Belly and Throwing Muses—opens performing his new ep, Pulsing...

Claytoon of the Day: A Trumpian Supper 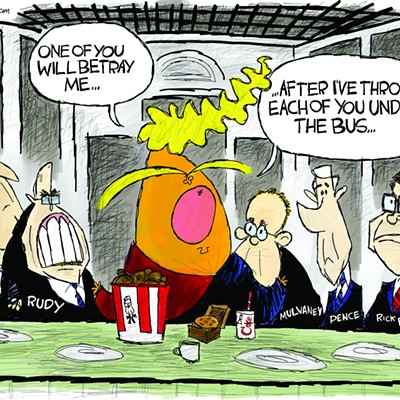