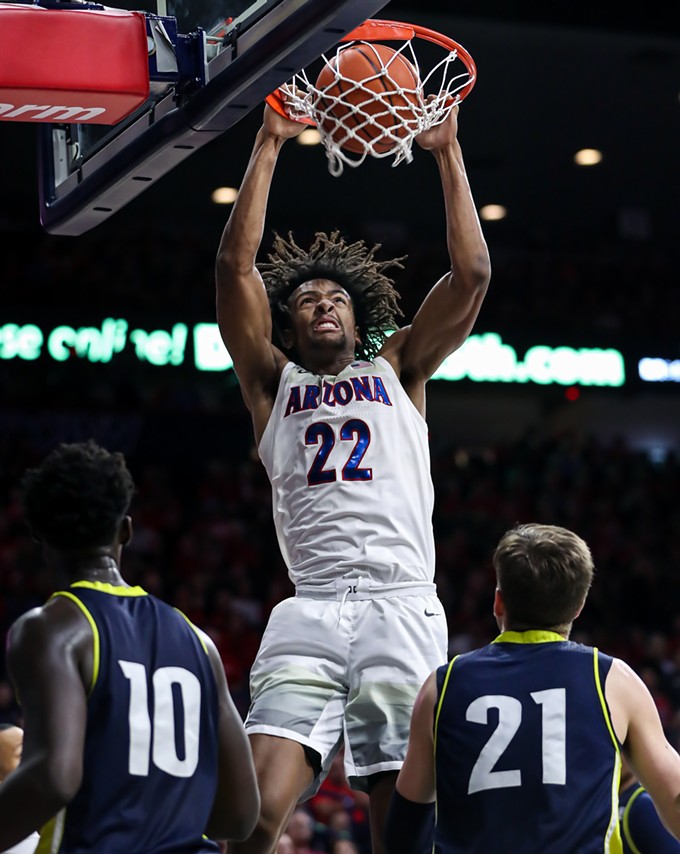 The Wildcats (3-0), never trailed in Thursday's victory, with freshman forward Zeke Nnaji leading the charge offensively, scoring 26 points on 8-of-8 shooting, with 11 rebounds in the win.

Eleventh-year head coach Sean Miller praised the effort that Nnaji and his teammates put forth against the Spartans in his postgame comments, while pointing out areas his players could improve upon before the team's next game, against New Mexico State at noon on Sunday, Nov. 17.

"We have to get a lot better on defense. In each game that we've played, we've had really good moments, and I think we have some things that we have to learn from and, I don't want to say bounce back from, but really try to look at and fix and teach," Miller said. "You're still at the very beginning of a season.

We have a lot of new faces. So, how much progress we can make from one game to the next is something we're talking a lot about, especially on defense."

Nnaji, who has averaged 21.7 points and 6.7 rebounds per game, while shooting 81.3 percent from the field in three games, praised those around him for setting him up with quality opportunities.

"My teammates are giving me the ball and the coaching staff have a good offense for us that's been working so far," Nnaji said. "I think we're just continuing to go with the flow."

That flow was virtually unimpeded Thursday, with 11 Wildcats scoring points, while dishing out 24 assists to 8 turnovers in the victory.

Miller remarked that the Wildcats have an embarrassment of riches, with a deep bench full of experienced players, such as University of California-Irvine transfer, Max Hazzard, who scored six points in the team's win.

Hazzard is joined by fellow transfers, Jamarl Baker Junior (Kentucky) and Stone Gettings (Cornell University) on this year's bench. The trio of newcomers excelled against the Spartans, combining to score 22 points in the win.

"We have a lot of guys that can play, and that should allow us to be really good in the second half of games, which has already shown up," Miller said. "It should make us a durable team throughout the long course of the season. We're not just dependent on one or two guys. We can strike from a lot of different areas."

The Wildcats will look to strike gold once again, when the Aggies of New Mexico State (2-1) come to McKale Center.

The Aggies enter Sunday's matinee off a 79-63 victory over Southern University, after capturing a Western Athletic Conference regular season and conference tournament championship in 2018-19.

Miller expects the Aggies to present a hell of a challenge to the Wildcats on Sunday, bringing a unique style of basketball to the Old Pueblo.

"I think New Mexico State will be one of the most difficult games we'll play all season," Miller said. "It will be one of our biggest non-conference games that we'll play. They won 30 games a year ago. Chris Jans is an outstanding coach.

Miller expects the Aggies, who are led by seniors Trevelin Queen and Ivan Aurrecoecha, to challenge the Wildcats for 40 minutes, giving the team a good sense of their progress after last year's disappointing 17-15 finish.

The longtime Arizona coach hopes the crowd will be electric, despite the early tip-off time, giving the Wildcats a unique advantage over their visitors from Las Cruces.

"What I'll tell you is it's going to be an amazing test and we have to be ready to go," Miller said. "You know, hopefully McKale Center will be electric. You hear about a lot of late starts. Well, this is the opposite. This is an early start and we're going to need our home crowd and we're going to need everything that we can really muster up to be ready for a very good team."

Claytoon of the Day: Trump's Gobbler 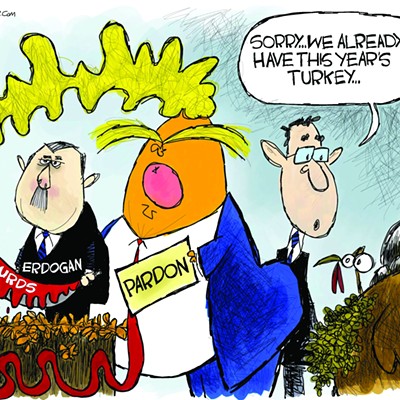