Laughing Stock: Jamali Maddix keeps it real at The O

If my id were as erudite as Jamali Maddix, I might not be so mad at the world, either. Or maybe it’s just the British accent that sees him through his smart and dispassionate reporting on, for example, the world of camming and virtual sex.

Maddix is blessed, or afflicted, with almost unnatural confidence. He has a journalist’s curiosity and a clear eye for human activity others may overlook or choose not to see. But his greatest gift is his ability to joke us into suspending judgement just long enough to find the hilarity in indiscretion and ignorance, as well as the absurdity of our judgement itself.

The O takes another big step forward in its comedy programming by delivering this glib Brit to a Tucson audience at 8 p.m., Friday, Nov. 15. Admission is just $10, too, for a show that’s sometimes unavailable at any price. Maddix occasionally has sold out shows in Europe and the UK, some with audiences in the thousands.

We recommend you check out his online videos from BBC2’s Live from the Apollo and the Edinburgh Fringe Festival, and his series, Hate Thy Neighbor, exploring neo nationalism. The Sunday (London) Times notes that his comedy offers “Something to offend everyone,” but we agree with Chortle, the UK’s most comprehensive outlet for UK comedy news, that “Maddix genuinely feels like a fresh voice.”

We remember Norm MacDonald as that guy Chevy Chase called “the best anchor to ever grace the chair” on SNL’s Weekend Update. Conan O’Brien has said MacDonald is his favorite guest after he told a joke that yielded a full, one-minute laugh. And David Letterman referred to him as the funniest man in the world, even inviting him to perform the last standup set ever on his show.
Also a hit on screens large and small, MacDonald starred in Billy Madison, the cult classic, Dirty Work, and three television series.

In 2017, Macdonald released his own special, Norm Macdonald: Hitler’s Dog Gossip and Trickery. He currently hosts Norm Macdonald Has a Show. The Guardian named his comedy special, Me Doing Stand-up, one of the best of all time, and Comedy Central named him in their top 100 comedians of all time.

We count on the best comedians to entertain us with their personal experiences and inner truths. There may be no inner truths tougher to bring to strangers than addiction.
Zane Helberg entertains his fellow travelers along life’s dark fringes at 7 p.m., Sunday, Nov. 17 at CODAC Behavioral Health, 3100 N. 1st Ave.

Helberg has always been this crazy. Now he’s learned to work it, instead of the other way around. He has the rare energy level and active physicality to bring folks along without bringing them down. He made it, after all, and came out a comedian.

Back at the Blackrock

Claytoon of the Day: Trump's Gobbler 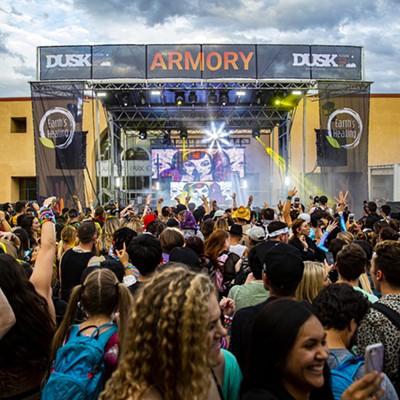