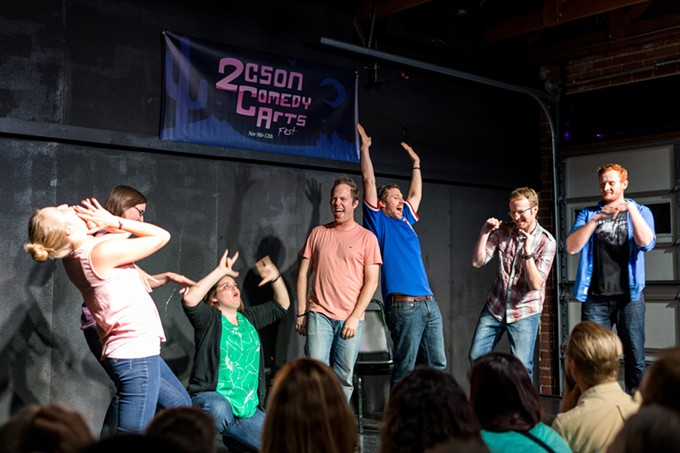 Pauly Casillas Headlines at The O

Aspiring rapper, Gary Busey nerd, cholo-manque and awesome dad Pauly Casillas is riding high right now. He has top-shelf comedy cred as a cross-cultural headliner – the opposing cultures being Tucson and Phoenix. Between comedy and the day gig, he’s almost too busy for fun. You’ll have to catch him at 8 p.m., Saturday, Nov. 2, when he headlines at The O.

Casillas’ comedy career began with a Gary Busey parody account on Twitter. The stream was such a hit by 2011, he got the nerve to try the venerable open mic at Laffs Comedy Caffe. He has since toured the U.S., opening for comedians Russel Peters and Tom Segura, among others. Most recently he headlined at Laff’s.

For a few years, he also ran a legendary but now-defunct open-mic at Mr. Head’s Gallery. He also created the popular improv-standup mashup, The Switch. Matt Ziemak now hosts that show every second Monday at The Hut.

In an interview with tucsoncomedy.com, Casillas cited his early influences as Martin Lawrence, ‘90s BET ComicView and Apollo comics. Lately, his wife inspires some jokes, too, but in a way that undermines the tropes feminists abhor. His conversational and relatable style have made him a Tucson favorite.

The creator of Comedians Who Are Not Men, Autumn Horvat, hosts the show,  and Matt Ziemak is featured. Tickets are $10 and $15 at Eventbrite.com.

“It’s an honor to have another round of Carcajadas: Una Noche De Comedia,” says Justin Lukasewicz, owner of the TIM Comedy Theatre. “We did an experiment in September and put on a show (with both standup and improv) completely in Spanish. There was such a positive reaction, we’re looking forward to making it a monthly feature at the theater, (so) and (want to) highlight it in the festival.”

Carcajadas is at 7:30 p.m. on Friday, Nov. 9, as part of the 5th Annual Tucson Comedy Arts Festival (TCAF) November 6 through 9 at the theater. Tickets are $5 for each of the 11; $25 for a festival pass, all available online, along with all show details, via tucsonimprov.com/tcaf.
Lukasewicz’ personal favorite highlight? He’s looking forward to a reunion. “Party Barf is one of my favorite shows,” he says of his own improv team. “We have performed at every TCAF and in New York City the past couple years.”

At 6 p.m., Friday, Nov. 8, original members Emmet Andrews and Brooke Hartnett will rejoin the team. Both were among Party Barf’s earliest members when Lukasiewicz founded the Tucson Improv Movement seven years ago.

Hartnett, now an improviser and screenwriter in Chicago, performs Friday at 6:30 p.m. with fellow TIM and Party Barf veteran Clare Shelly in their longstanding duo team, Kitten Spit. On Saturday, Nov.9, she leads a workshop about listening skills.

The 808: Hip Hop Improv team, a hit at both the first and second TCAFs, brings back its high energy west coast beats on the fest’s closing show from 9 to 10 p.m., Saturday. Sharing the finale’s lineup are the Frontier and VerizonQwest teams and TIM’s own long-running, all-female team, The Riveters.

The fest opens with a  7:30 p.m., Wednesday improv show featuring three teams from different US improv companies. At 9 p.m., UA’s comedy teams Comedy Corner and The Charles Darwin experience perform, and admission is free with a CAT Card.

Reflecting on Tucson's comedy scene has evolved over TCAF's five-year history, Lukasewicz says, “I think the scene is becoming more inclusive and diverse. When we started The Best Show Period, there were almost no other exclusively female shows. Now there are many, and since we started Carcajadas, there has been a lot of interest in creating more all Spanish shows. Em Bowen is working on a Queer comedy workshop, and I hope that we can continue to bring more voices into the scene.”

Speaking of Comic-Con, entertainer, storyteller and WWE Hall of Famer “Hacksaw” Jim Duggan (he of the USA! USA! chant) delivers a storytelling set at Unscrewed Theater at 6:45 p.m., Sunday, Nov. 3. Duggan is also featured at the Con, spinning comedy from behind the scenes stories of his crazy life and times as a professional wrestling superstar. Tickets are $20, or $30 for VIP, which covers special seating and a meet-and-greet.

A host of Tucson’s comedy stars and lesser lights will celebrate the debut of The "O"pen MIC at 6:30 p.m., Sunday Nov. 3. Scheduled as a weekly event, the show is hosted by Matt Ziemak, who has a track record of successful, long-running shows. With Rory Monserat, he founded Brew Ha Ha at Borderlands Brewing Company, now in its fourth year. At The Hut he runs the monthly Switch show which he inherited from Pauly Casillas. The mic is free, and non-comedians are welcome to enjoy watching comedians kill, bomb and everything in between. Your feedback could make someone a star … eventually.