The Surfbroads
Fishnet-clad mistresses of maritime trauma The Surfbroads raid their closets for titillating surprises in advance of raining theremin-drenched hi-jinx and sunny oblivion at this year's Nightmare on Congress Block Party. At Hotel Congress...

The cultural remezcla that typifies the borderlands spills over to the Maynard's plaza late night. DJ Q and Quiahuitl from the El Tambó crew spin sides...

Brace yourself. Composer Brandon Boone, performing a live score, transports the audience into a web of terror when The No Sleep Podcast brings its touring show Live For Halloween to 191 Toole...

At once sophisticated, yet whimsical, if not quirky. Two-Door Hatchback perform in the tasting room at Sand-Reckoner...

A perfect pairing for date night. Naim's A Jazz Trio is at Exo Roast Co... 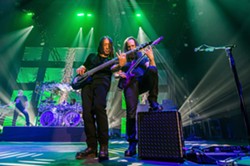 These Berklee College of Music grads formed in 1985 under the name Majesty. Now, the Distance Over Time Tour sees progressive metallists Dream Theater roll the semi-trucks into the Tucson Convention Center...

Released on Inauguration Day 2017, Apocalipstick revealed gnashed teeth. "I was an over-confident teenager trying to solve the world's problems," says singer/guitarist Clementine Creevy, with go-for-broke honesty. On Stuffed & Ready (Secretly Canadian, 2019), "I am a much more weary and perhaps cynical woman who believes you need to figure your own self out first." Cherry Glazerr take a "Sip O' Poison" at 191 Toole. Cowgirl Clue breaks the ice...

From her salad days with The Stone Poneys to her timeless pop classics, Ann Hampton Callaway celebrates the many faces of love in Linda Ronstadt's iconic career. At the Fox Theatre...

From West Virginia, Eric Burton grew up singing to the congregation in church. After moving to Austin in 2016, he saw the power of the human voice while busking in the streets—eventually becoming the subject of a short documentary film, Street Music. Retro-soul slayers Black Pumas rise like a black moon above the clouds. At 191 Toole. Piano prodigy Neal Francis opens...

Like your toast with jam? Mik & The Funky Brunch provide family-friendly funk. At La Cocina...

Be tragic. Tunes From The Crypt finds DJs Nullus and SET spinning goth and industrial from the '80s and '90s to darkwave and witch house from today. Darkness knows no bounds. At the Surly Wench Pub...

Enjoy the patio life with Golden Boots and Feverfew. At Che's Lounge...

The post-modern American western of P.D. Ronstadt & The Co. and the home-grown indie folk of Big Grin can be found at Monterey Court...

Things to Do in Tucson This Weekend

Claytoon of the Day: Human Scum